NVIDIA is ready with their next generation graphics chip, the G70 and we have the scoop on whether or not you’ll want to spend your hard earned money on this GPU.

Whether you would believe it or not, we have gone through a drought of new GPU releases.  It has been 14 months since the initial release of the 6800 Ultra chipset, back in April of 2004 and the X800 XT in May of 2004.  For an industry that has typically had very time sensitive 6-month product releases, this is quite a change and is due mainly to the problems that both NVIDIA and ATI had in getting their last generation product out to the users.  NVIDIA makes the claim that their SLI technology was rolled out in November of last year and that it should count as their product refresh, I’m not so easily swayed.  Not that it mattered — no use releasing ANOTHER product that no one can buy, right?

Over the past several months though, rumors began to swell about the existence of the NVIDIA G70 technology, a new GPU design from the ground up.  Then, when the Playstation 3 was announced and NVIDIA was on hand to demo their ‘RSX’ graphics chip, the rumor mill was started once again as the presumption that RSX was in fact the G70 was running full circle.  We’ll tackle that issue later.

Today NVIDIA is bringing to light the GeForce 7800 GTX graphics processor.  The code name of G70 now has its official nomenclature, and for those of you wondering where the NV50 and NV60 parts went, they never existed.  NVIDIA simply moved over to the G initial to indicate a graphics chip and the C initial to indicate a core logic chipset for motherboards.  Oh, and G70 paired well with the name 7800; that’s about it.

The GeForce 7800 GTX GPU is one of the biggest consumer level chips ever designed.  As something similar was shown during the Playstation 3 launch, the G70 chip does in fact include 302 million transistors. 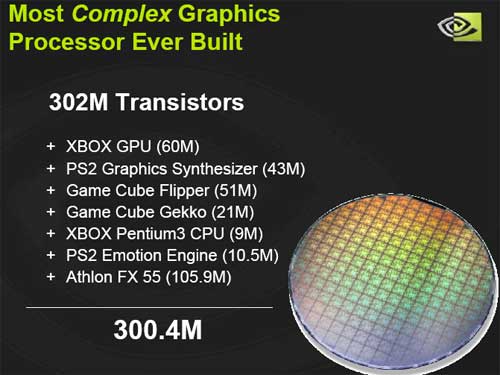 You can see from this slide that the 7800 GTX chip has more transistors than the Xbox, PS2 and GameCube GPUs combined with their processors and an Athlon 64 FX-55 processor thrown in for good measure.  That should give some indication on the size of this chip, and the cost that NVIDIA has in producing these chips on the 0.11 micron process.

NVIDIA claims the 7800 GTX and the CineFX 4.0 engine brings over 200 Gigaflops of shading horsepower and 2x the floating-point shader power over the previous NV4x technology.  This is what will bring about the performance increases we will see in our benchmarks.  New technologies have been added to the chip as well including a new texture core that accelerates 64-bit floating point texture filtering for improved HDR (high dynamic range) performance.

NVIDIA supplied us with a pair of 7800 GTX cards for our testing, and you’ll see them pictured below.

The card itself is less than an inch longer than the 6800 Ultra boards that are currently available, but the 7800 GTX has a single slot cooler design.  That’s right, NVIDIA has reverted back to the good ‘ol days of having a card that fits in a single expansion slot!  Now that doesn’t mean these cards don’t get hot, as they certainly do; in my testing the heatsink on the card was hot enough to nearly burn me during testing!  What is even more interesting is that the fan on the heatsink never seemed to spin up to its full speed except during the initial POST sequence, even during full load.  The card was never unstable though, even running in SLI, so I can’t fault them for that yet.

You can see the same SLI connection at the top of the card that we have become familiar with on the 6×00 series of cards over the past 8 months or so.

The back of the card holds half of the 256 MB of total memory that our reference card was configured with. 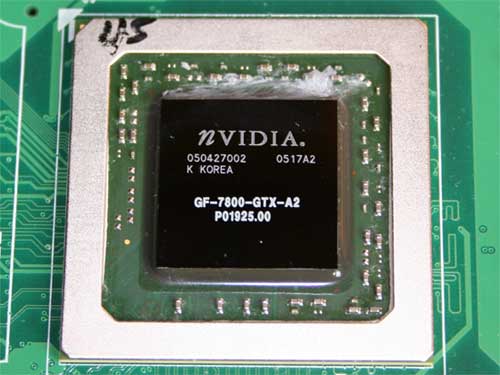 Here are the specifications for the GeForce 7800 GTX as set forth by NVIDIA for this launch:

Let’s start with the core clock speed of 430 MHz; you’ll note that this is only 5 MHz faster than the 6800 Ultra that has been running at 425 MHz for some months now standard.  The memory clock is running 50 MHz faster than that of the 6800 Ultra too.  But even though the clocks are not significantly higher NVIDIA is able to push out a lot more performance by adding more pixel shader units and by tweaking each of them for better performance.

Let’s take a deeper look into the inner workings of the 7800 GTX GPU.