Like everything else in the package, the K8 Upgrade 760GX BIOS is very simple. There are basic features for CPU multipliers, RAM timings, and device and peripheral settings. There aren’t any special features in BIOS like fan controls, dynamic overclocking, or loads of voltage and temperature monitors. It was oddly refreshing to use a BIOS that was so simple (reminded me of my DELL days). 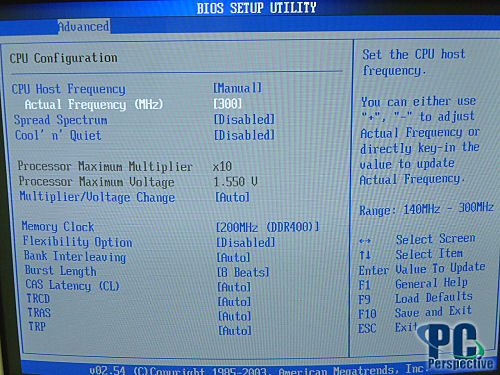 In the above CPU configuration screen in the BIOS, we see all the nitty-gritty tweaks that the K8 Upgrade 760GX has to offer. Not too nitty-gritty is it? The bus frequency can go down to 140MHz and up to 300MHz, and CPU multipliers from 4x up to the default (10x in this case). Voltage settings are only available for the CPU and can be adjusted from 0.8V up to 1.55V. This voltage adjustment isn’t much considering the default CPU voltage is 1.5V and the most you get is 1.55V. There are no RAM voltages or chipset voltages to speak of.

RAM can be adjusted from 133MHz > 166MHz > 200MHz. With the Corsair RAM we used in this review, setting the speed to AUTO incorrectly identifies the speed of the RAM as 333MHz. Maybe this is a bug, but perhaps the BIOS likes being conservative?

An interesting setting is the “Flexibility Option” when enabled helps the board support a larger range of RAM modules. However when this was enabled, I found that the memory performance dropped drastically. So only enable this option if you find yourself running into RAM issues. 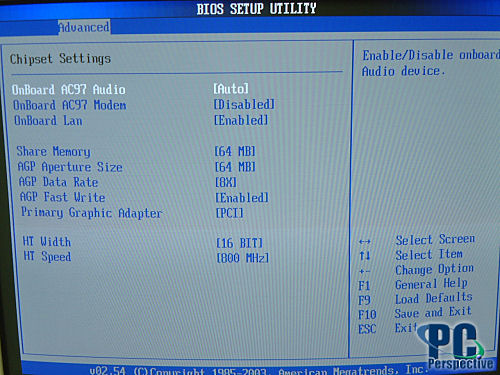 Above we see some of the chipset settings in the BIOS. The “Shared Memory” setting determines how much of the system memory is allocated to the SiS Mirage 2 integrated graphics. You can set up to 128MB and as little as 32MB. Unlike the Intel Extreme Graphics, the Mirage 2 can not be run concurrently with your AGP adapter. Also seen in this screen are Hyper Transport settings which you can change from 8 to 16 bits, and 400MHz up to 800MHz. 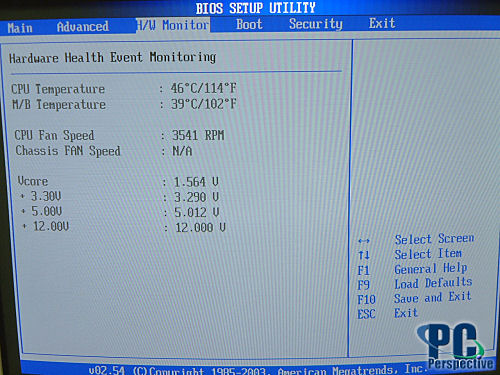 Here you can see the various stats related to your system’s health. Not much here in terms of fan controls or temperature alarms/shutdown settings. It’s all pretty plain.

For those who have walked the road of adjusting bus frequencies we know the brands that have become associated with overclocking and tweaking. ASRock, unfortunately, isn’t one of them, which is why I was eager to set the K8 Upgrade 760GX through its paces.

As seen in the BIOS section at the top of this page, there really isn’t anything that stands out as being particularly worthy of an overclocker’s attention. With only a maximum CPU voltage of 1.550V and no RAM voltage settings you’re probably not going to get very far. But let’s see if I’m wrong.

With the RAM at 400MHz, I started increasing the bus speed using the default voltage and CPU multiplier. I was able to get to 218MHz before the system started to become unstable and restart during Windows boot-up.

I then dropped the multiplier to 9x and put the memory at 333MHz. I was then able to get to 243 MHz bus stable and was able to boot as high as 246MHz but was unstable. This isn’t quite as high as the ABIT KV8 Pro we reviewed a while ago that hit 252 MHz, but considering all you have is VCore adjustments and bus speed to play with on the ASRock, the results are actually pretty impressive.

I would feel more comfortable if there were more voltage settings however, just so I can give the board components a bit more juice to improve stability. 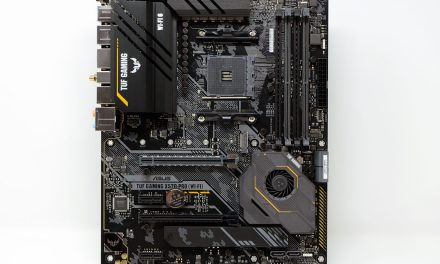