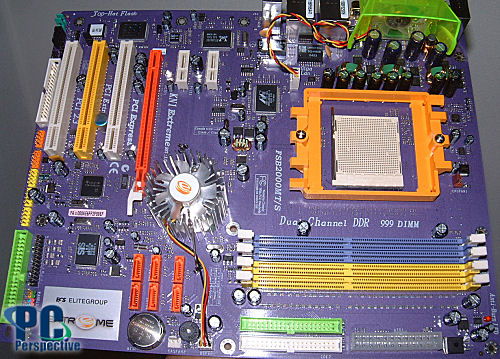 Just by looking at the ECS KN1 Extreme, I can tell that a lot of care was taken into designing the layout of the motherboard. The socket area is clear of any big obstructions with the capacitors just slightly taller than the retention bracket. Large heatsinks should not have problems being installed on this board. The ATX power connector and 12V connector are thoughtfully placed along the edges of the PCB, well away from the socket so it makes installing CPUs, heatsinks, and routing cables and tubing for watercooling a lot easier. 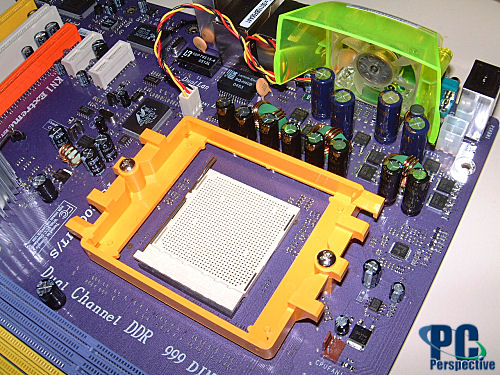 The socket is clear and installs large heatsinks without problems.
A special fan/duct helps exhaust hot air from the MOSFETs.

Just behind the socket is a green plastic chute connected to a 40mm fan which ECS calls “Surround Cooling”. This sort of ventilation is similar to the one seen on the EPoX EP-9NPA+SLI and helps draw hot air off the MOSFETs and the area around the CPU. While this fan does not replace the other exhaust fans in your system, it does give some focused airflow around the hottest area of the board.

Unlike the EPoX EP-9NPA+SLI, the chute on the ECS KN1 Extreme is not very large. In fact, I was able to fit the massive Zalman CNPS7700-Cu onto the socket without having to remove the plastic shroud. 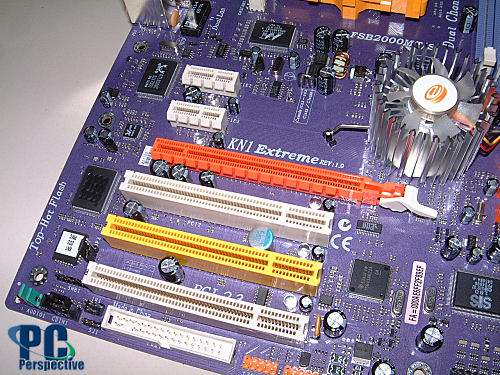 The PCI-E 16x slot is placed well away from the socket area toward the bottom half of the board. This allows your graphics card to take advantage of the intake fans mounted on the front of most ATX cases and keeps it from directly adding heat around the socket. As you can see from the picture, the cooler on the MCP chip may pose a problem for long cards like the 6800GT. Though the MCP cooler is offset to clear the PCB of a long graphics card, the height of the fins may be an issue if the back of the video card has extra cooling. 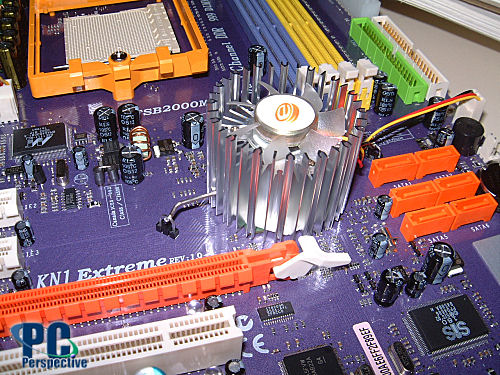 A nice, large aluminum cooler adorns the hot NF4 MCP.
To the right you can see six SATA-II connections.

Taking a closer look at the MCP cooler, it looks like a taller version of a Crystal Orb that ThermalTake produced in huge quantities a few years ago. The fins are a hefty aluminum and feels very solid. It’s clear to me that this isn’t just a visual or marketing gimmick, this cooler is designed to perform. (FYI, that MCP gets really hot!).

The board is very colourful and has various LEDs onboard to give it some flash in a windowed case.

The ECS KN1 Extreme is very well designed and executed. Some serious thought went into making the on board components accessible and convenient to use ( i.e. jumpers aren’t crammed up against capacitors or in between slots). Let’s just hope ECS can keep this great design in all their future Extreme products. 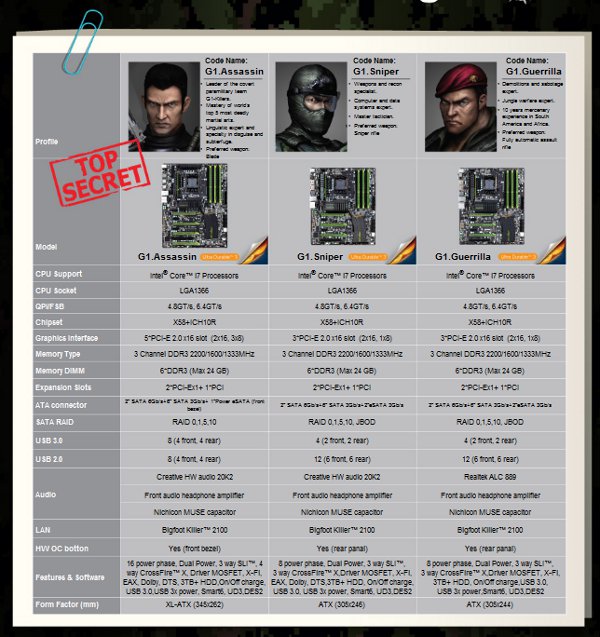