Starting with drive connectivity, the KN1 SLI ecomes with dual-RAID thanks to the NVIDIA MCP and the SiL3132 chips. The MCP itself provides four SATA-II connections with RAID 0, 1, and 5 functions, in addition to two ATA133 channels (for four devices) and a floppy drive. The SiI3132 supports another two SATA-II drives and also comes with RAID 0, and RAID 1. 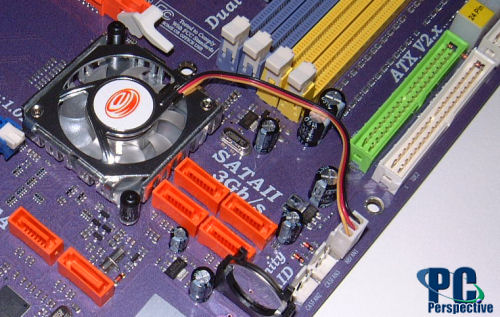 Absent from the KN1 SLI is the extra ATA133 channel that was included in the KN1 (see here). The SiI3132 is strictly a SATA-II host controller that runs on PCIe, which is a lot faster (theoretically) than the SiS180 that was on the KN1 (the SiS180 used the PCI bus and only supported SATA v1.0). I’m a bit disappointed that there isn’t a 3rd ATA133 channel, but the tradeoff for speed and SATA-II may be worth it. (Thanks to Peter M for pointing this out!).

USB 2.0 is a big feature on the KN1 SLI. The board can support up to ten ports using three onboard headers and four ports on the rear I/O. ECS includes a bracket with two USB ports, so you have a total of six usable ports out of the box. Firewire/IEEE1394a is also represented with two onboard headers with both ports usable thanks to the included bracket (one 4-pin port and 6-pin port).

Good amount of connectivity is a strength of the KN1 SLI.

Legacy devices are also supported through a single serial port, a parallel port on a bracket, and PS2 mouse and keyboard jacks.

For networking, there is a Gigabit port and an 10/100 port provided by Marvell 88E1111 and Realtek RTL8100C respectively. Though the Realtek NIC is not a Gigabit connection, it does install with Windows XP without needing drivers. This is really convenient if you want to get your computer up and running without having to dig for seperate drivers.

Audio on the KN1 SLI Extreme is a bit unexceptional. It uses a Realtek ALC850 chip which is capable of AC’97 v2.3 which in itself is pretty basic, so you may want some beefier like an Envy24 card or an Audigy 2/4. Unlike the KN1 that only had three analog jacks on the back, the KN1 SLI has all six analog jacks to make your life a lot easier. Kudos to ECS on making that small, but useful improvement!

Like the KN1, the KN1 SLI has both optical and coax SPDIF output.