The ECS KN1 SLI Extreme follows in the great tradition of the KN1 Extreme with a clean and uncluttered design. 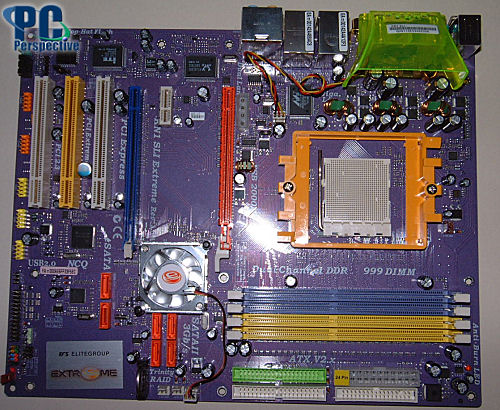 The socket area is mostly clear of any large obsctructions which will make installing larger heatsinks a bit easier. There are some tall capacitors towards the rear which may be of some concern. However this issue of a cluttered socket may become less of an issue since many aftermarket cooler manufacturers are adopting taller designs using heatpipes rather than using a wide base. 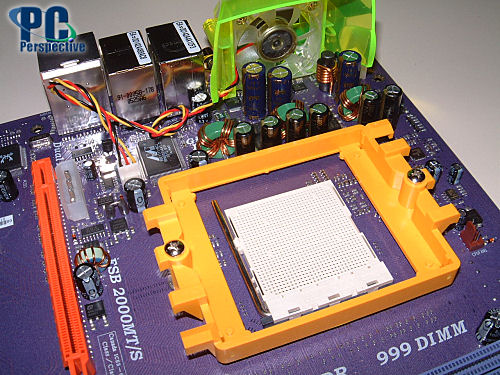 Like othe ECS Extreme series motherboard there is a 40mm fan with a duct directly adjacent to the socket. The idea is to help exhaust the hot air lingering around the MOSFETs and the CPU. The duct may interfere with installing a larger heatsink so you may have to remove it (easily done by undoing some screws). 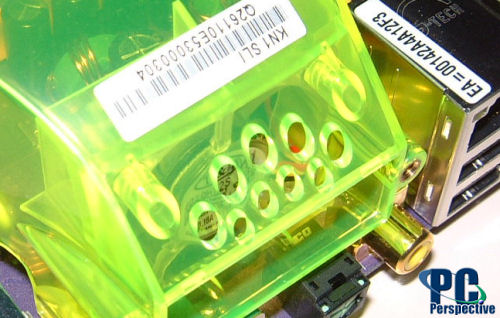 A bizarre consequence of this duct is that it causes wind noise when a high CFM fan is used over the socket area. This noise can be reduced by covering the holes or remove the duct all together.

Unlike most other SLI motherboards on the market, the KN1 SLI Extreme does not have require any jumper card be flipped in order to enable SLI. All you need to do is install your cards, connect the bridge, and the system automatically turns on SLI. Very convenient. 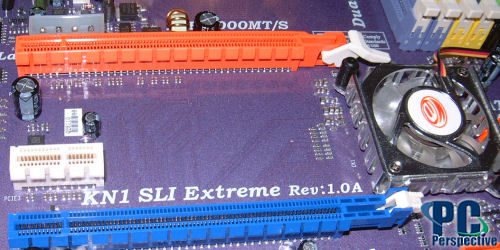 Looking at the design of the x16 PCIe area, we see that the SLI slots can be powered by an auxiliary molex connector for increased stability. On the MCP, the KN1 SLI unfortunately does not have a nice beefy MCP fan like the one on the KN1 – there just isn’t enough room for a large fan between the x16 slots. The board’s single x1 slot is sandwiched between the x16 slots which is unusuable if you’re going with SLI.

A bit of an oddity and an annoyance is the retention clip on the SLI / second 16x channel. For some reason, ECS uses a different clip on it which is very short. This makes removing your second PCIe vidcard a pain if your card’s heatsink ends up blocking it. 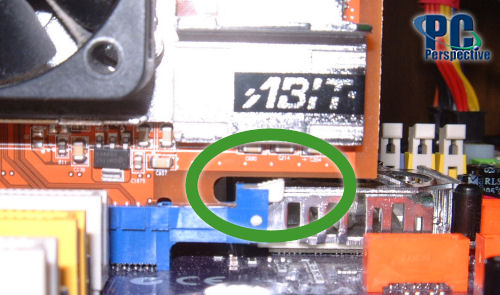 Removing video cards from the second 16x slot difficult
because of the short clip.

Neatly running along the bottom edge of the board are all the connections for external ports: IEEE1394, USB 2.0, CD audio, front panel connections, and the parallel port. Though I really like how it’s all nicely laid out, the Firewire pins are near the back corner of the board which may make routing connections a little difficult.

The ATX power connectors are thoughtfully placed in easily accessible spots. The 12V is next to the duct near the rear, and the 24-pin connector is right next to the floppy. Since most of us don’t use floppies these days, it’s not a big deal to have the power cable crammed up next to it.

I had some reader comments after posting the KN1 Extreme review that the board is ugly. Well, it is a bit garish. There are two shades of orange and yellow. There is purple, blue, florescent green, and white. All the colours don’t really match with each other. Some of us have to show this off in a case, at least ECS should make it look a bit nicer. 😉