Today NVIDIA unveils a new GPU, the 7800 GT. A younger brother of the latest GTX model, the GT offers a great mix of performance and a lower price. The XFX model we used in our review also comes pre-overclocked to top off the whole deal; and you can buy it now!

On June 22nd, NVIDIA brought out of hiding the long awaited G70 graphics architecture that has been in development for some time.  This time it came in the form of the NVIDIA GeForce 7800 GTX GPU but it also came to light that this technology will be found in the upcoming Sony Playstation 3 console.

Also surprisingly, NVIDIA did something no one has been able to do for some time now, and that is actually having hardware available on launch day for purchase.  This is a complete change from the patterns we have seen over the past three years in the graphics and processor markets where paper launches were becoming the norm.

Today at Quakecon 2005, NVIDIA is unveiling another GPU based on this same G70 technology, aimed at a lower price point but still screaming fast performance.

NVIDIA’s new GeForce 7800 GT GPU is based on the same graphics core technology that powers the 7800 GTX, with a few minor changes such as number of processing pipelines accessible and clock speeds.  Here is a comparison table on the specs of both parts.

As you can see, these two parts are more alike than they are different.  What we basically have here is a slightly down-clocked and down-piped GTX core and a new name and price point.  To see this from another point of view, here is a look at the block diagram taken from our 7800 GTX review with the units removed on the 7800 GT model ghosted out.

As far as I can tell, the 7800 GT is composed of the same amount of transistors based on die size and this might lead some hardcore hardware enthusiasts to think about the possibility of ‘unlocking’ the hidden pipes on the GT cards.  While nothing is out of the realm of possibility yet, NVIDIA has surely learned a thing or two about hard locking a chip down to avoid ‘free upgrades’ since the fiasco with the nForce 4 Ultra/SLI chipsets a few months back.  I will likely keep an eye out for any potential methods to try on these cards and let you know.

With the new 7800 GT and an MSRP of $449, NVIDIA has rearranged some of their pricing schemes to help the cascade of cards fall into place. 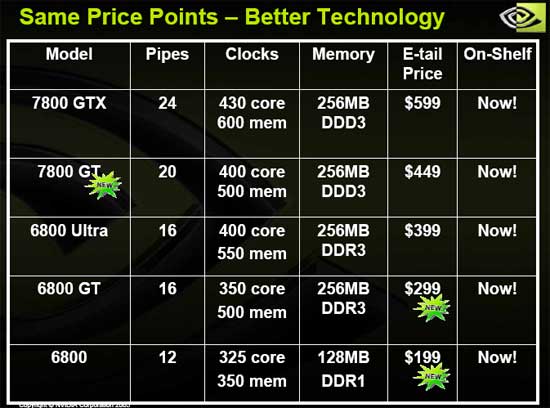