ATI has finally released CrossFire technology to the world in form of the X850 XT master card. Can it stand up to the best NVIDIA can throw at it? What about the second best? Does CrossFire bring the value ATI promised all those months ago?

On what seems that everyone knows is nearly the eve of the introduction of the long awaited ATI R520 core GPUs, we have this review for you instead.  The much anticipated and long delayed CrossFire platform is finally spreading roots in retail and e-tail vendors this week and thus ATI saw fit for reviews to sprout up as well.  Even though we first previewed this technology back in May, no one, including the press, had actually gotten their hands on it in final form until just a few weeks ago.  And do you want to know the reasoning?  ATI had to have the product available for sale when it was launched — since NVIDIA set that precedent with their 7800 products, there is really no getting around it anymore.  And that is in all ways a good thing.

ATI’s competitor to the now firmly planted SLI technology from NVIDIA now has even further to run to catch up — and now it is uphill as well.  I have reproduced a quick refresher on the ATI CrossFire technology below, but be sure to check out my initial preview from May for more details.

Just in case the last three months haven’t been kind on your memory, let’s have a look at what makes the CrossFire cards tick.

In a similar, but different, way to what NVIDIA has been doing in SLI for some time, ATI does here too.  The two video cards attempt to split the workload of the graphics rendering, process their parts separately then share the data together to make a single image to output to a monitor.  The result should be a faster video subsystem and thus better overall game play; if it pans out that is.

How does ATI’s method differ?  For starters, a CrossFire system is required to have both a ‘Master’ card and another card to act as the “Slave”.  While you could use another Master card, we are assuming here that would take the less expensive way out.  Secondly, the ‘sharing’ of data that has to occur between these cards is done via an external dongle that connects the DVI connector of the slave card to the DM-59 connector on the master card.  NVIDIA’s solution uses an internal bus that connects via a small bridge card.  On ATI’s setup, a compositing engine that is an external chip on the card takes the incoming data from both the slave and master cards and combines them, outputting the result to the screen.  In reality there is no technical reason that either method is better than the other save for the fact of personal preference.  We’ll cover the much debated ’60 Hz’ flaw in our detailed section coming up.

First up, we have Alternate Frame Rendering.  It does exactly what it says it does: it gives the even frames to the master card and the odd frames to the slave card.  Because this method allows both cards the full power of their vertex shading units, AFR has the highest potential for performance improvement but has a theoretical flaw that keeps it from working with all games.

Next we have ATI’s exclusive SuperTiling render mode that breaks the image up into 32×32 pixel squares and divides them in alternating fashion towards the two cards.  This division is done in the hardware for free, meaning there is no software overhead in the delegation of the tiling.  Though SuperTiling has the advantage of being completely functional with any 3D application that exists, it often runs slower when doing so. 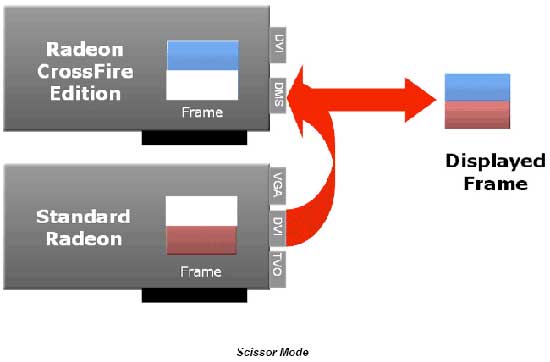 Scissor Mode is ATI’s way of saying split frame rendering where the screen is divided either horizontally or vertically and each card renders one section of the screen.  The division does not have to be half, but instead can run at 60/40, 70/30 or anything else, though ATI’s version does not dynamically modify the split while playing a game.  The drivers select the optimal mode (by internal testing at ATI) and split.  In general, the Scissor mode is the least efficient method of breaking up the work. Sometimes you do what you can to get some performance benefit, right?

As of now, the ATI cards that are capable of running in a CrossFire configuration are any PCI Express X800 or X850 family video card.  If you already have one of these cards you will be able to purchase a master card and a CrossFire motherboard and be on your way to multi-GPU bliss in no time.  Read our detailed sections for more info on how this might not be your best option yet though.