NVIDIA has readied its first integrated chipset since the nForce2 and is going to try and take the AMD market by storm by offering HD output for the first time on a motherboard.

Rumors have been abound for months now about the upcoming NVIDIA chipset dubbed the C51 — we even saw pictures of manufacturer’s boards at NVIDIA’s booth this past Computex in June.  But up until now, the product based on this chipset technology was a mystery, finally revealed by an announcement yesterday.

The product has been officially named the NVIDIA GeForce 6100 chipset; at least in one of its iterations.  A new product category has been created by NVIDIA called the ‘GPU Motherboard Solution’ that is really just a chipset with integrated graphics.  NVIDIA wanted to leverage the power of their GeForce name in the market so they are calling the north bridge a GeForce while the south bridge retains the nForce moniker.

There are two north and two south bridge chips that were announced, able to pair together in any fashion an OEM might desire.  The chipsets have different features, and of course, different prices to go along with them.

The GeForce 6150 and 6100 are very similar chips in most respects, but the 6150 has a more powerful video engine and a faster 3D core as well.  The GeForce 6150 and 6100 will have a two pixel pipe and one vertex pipe core that runs at either 475 MHz or 425 MHz, depending on the flavor.  This of course does not seem like a fast GPU by any stretch of the imagination, but should be capable of delivering to the intended market.  Both of the 6100 series chips get the benefits of having SM3.0 support, DX9.0c and PureVideo technology.

You can also see that the 6150 adds HD video support, TV encoder and dual head output capabilities over the 6100 north bridge as well as one additional x1 PCIe slot.

The nForce MCP south bridge will also come in two flavors: the 430 and 410.  The 430 offers Gigabit Ethernet, Firewall, two SATA channels and RAID 5 over the 410.  Interestingly, the supplied NVIDIA docs don’t mention it, but we do know that this MCP supports Intel’s Azalia HD audio codec.

The two north bridge chips can be paired with any of the two south bridge chips to complete a unique motherboard solution that is suited towards varying needs.  Since the chips are pin compatible with each other, vendors can easily migrate their designs between these chipsets when necessary. 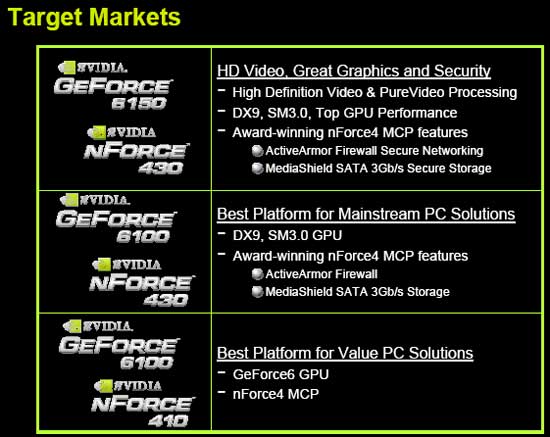 This chipset is going to be an AMD exclusive for the time being and expect to see both 754-pin and 939-pin implementations from different vendors like Gigabyte, Asus and MSI. 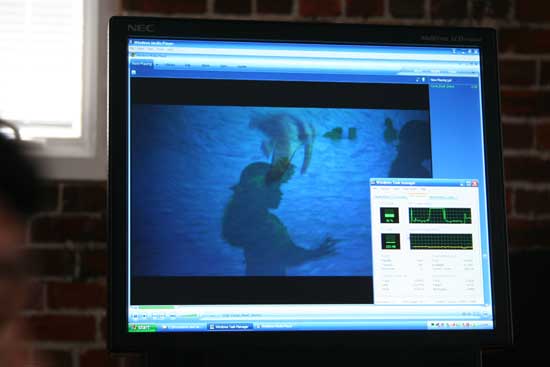 The system was running on a Biostar motherboard with a 3700+ Athlon 64 processor with a GeForce 6150 and nForce 430 combination chipset.

While the GeForce 6150 isn’t going to be breaking any speed barriers on the graphics performance front, it does position NVIDIA is a spot it has been absent in for some time: that of integrated graphics on a chipset.  I can for see many users turning to a solution based on this platform for a home media center PC or an HTPC as well too.  I am expecting to receive a test system based on just that concept and we will surely report our results back to you as soon as we have them.