I knew going into this review that overclocking on this card was going to be quite a hassle and probably wouldn’t go very far.  I had seen as much on the 6-series of dual GPU video cards around the web and from what I know the problem lies more in engineering than in cooling.  But of course I gave it a whirl anyway. 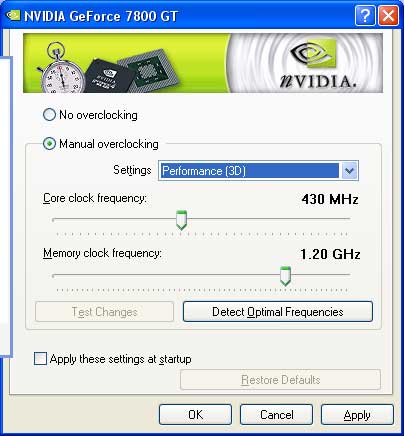 Here are the stock speeds of the Asus N7800GT DUAL; both cores running at 430 MHz and both memory controllers running at 1.2 GHz. 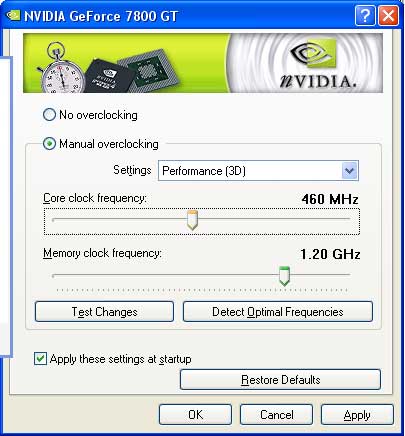 And this is the highest overclock I could get out of the card and still remain 100% stable.  460 MHz is a reasonable jump over the reference clocks and no one can really complain about a free 30 MHz bump in the GPUs speed.  It is no where near the higher overclocks we have seen on 7800 GTs, some around 490+ MHz.  The memory speeds are disappointing though as I was unable to get them above their 1.2 GHz speed without on-screen corruption or instability.

The additional core clock speed gives us a minor gain in our 1600×1200 3DMark05 test that is able to push us up over 8000 points!  That is well above even the 5587 points a single X1800 XT produced making the Asus N7800GT DUAL hands down the fastest single graphics card on the market.

The engineering complexities involved in having two 7800 GT GPUs on a single PCB as well as having 512 MB of memory going to two different memory controllers is surely the reasoning behind this apparent lack of headroom on the N7800GT.  As we saw in our benchmarks though, it doesn’t seem that running at 430/1.2 is really holding the performance of the N7800GT DUAL back at all as it was able to outpace the performance of the dual 7800 GTs in SLI mode that ran at 450 MHz core.

This is something I was very interested in when I first got the N7800GT DUAL in.  With that external power supply feeding the card, what kind of power consumption were we going to see: improved or worsened?

Here you see our results.  Note that for the results on the Asus card we actually had to take two readings: one from the power supply feeding the entire system and one from just the power adaptor feeding the video card.  I added them up to get the total wattage results you see above.

At idle the Asus N7800GT DUAL configuration is right on par with the XFX SLI setup, using just 7 watts more power at the Windows desktop.  Once we turn up the juice and bog down the card though, the Asus card uses 37 more watts of power over the XFX SLI cards.

For those interested, here are the break downs of the power usage by system and by external power adaptor.