While Asus wasn’t the first to come up with the plan and release a dual-GPU video card (in recent times), they are the first to do so with the NVIDIA GeForce 7-series GPUs.  The N7800GT DUAL takes two of the most powerful GPUs available on the market today, and combines them on a single card and gets outstanding results.  Their inclusions of the external power supply dedicated to the video card is also a first (again, in recent times) and addresses the issue that both ATI and NVIDIA have been shying away from; graphics cards and power requirements.  While the power supply solution might not be pretty, it is effective. 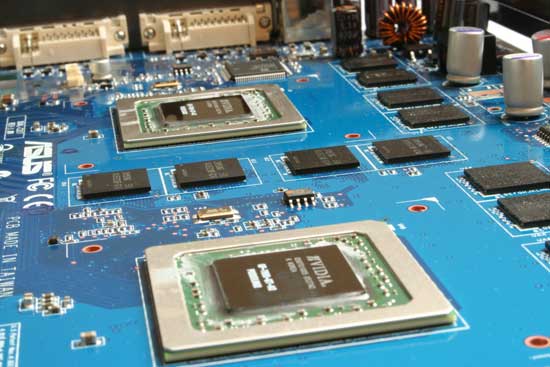 The Asus N7800GT DUAL performs at nearly identical levels to a standard 7800 GT SLI setup.  As there is no performance penalty for putting both GPUs on a single card, users who were planning on getting two 7800 GT cards can now get the same level of performance on a single card, saving space in their system for additional components.

And while this might be stretching the rules just a bit, Asus can now lay claim to having the absolute fastest single video card on the market today!  Sure it happens to have two GPUs on it, but who cares?  It wastes the 7800 GTX and the X1800 XT/XL cards in terms of performance in nearly all cases.

One area of disappointment, the Asus N7800GT DUAL did not prove to be the potent overclocker that most of the Asus line up of graphics cards have.  It did reach 460 MHz core clock, which is far from slouching, but didn’t come close to our records we have set with single GPU card configurations.

For now, the Asus N7800GT DUAL has a limited range of flexibility when it comes to which motherboards it can be installed in.  Besides five Asus SLI motherboards, the Gigabyte K8NXP-SLI and the DFI nF4 SLI-DR are the only other boards currently officially supported by Asus.

What about unofficially?  Well I can tell you that I will be plugging the card into several more motherboards this week and will make sure to get the results up in here and on the PC Perspective front page ASAP.  I am hoping to find out if the card will run in non-SLI chipset motherboards as well.

Update (10/13/05 @ 1:25pm EST): New information was given to us this morning that shines a much better light on the motherboard compatibility issue.  I suggest you re-read our page discussing that for a detailed description of the PCI Express bus issue at hand.

One other aspect we didn’t touch on yet was that there is a chance the Asus N7800GT DUAL won’t fit in your case!  Yes, that additional size on the card height that was required may mean that if your case is teenie, weenie; you may be SOL.  Make sure you take a gander inside your case to double check.

This area is still in the air a bit since we haven’t found the N7800GT DUAL for sale yet and probably won’t for at least another two weeks.  So we have to go by the information provided to us by Asus for these matters.

First, this particular card is a limited edition run of 2000 units (I have number 36).  So that in and of itself means that this card may be harder to find than we are used to.  As for pricing, you can expect to find this card to sell for around the price of two standard 7800 GT cards.  Currently you can find the Asus 7800 GT for sale around $400.  Do the math and that means this N7800GT DUAL is going to cost you somewhere in the neighborhood of $850 to own.  Gasp.

Is that price worth it?  If you were planning on getting two 7800 GTs and running in SLI mode anyway, I’d say yes.  If you were just getting a single card and thinking about getting a second oneâ€¦hold off on that unless the price for this card turns out to be much lower than expected.

If you want the absolute fastest graphics card on the market, then you must get the Asus N7800GT DUAL — no questions asked.  You are going to pay for that privilege with a video card purchase of over $800, but if you can afford SLI then you can afford this on nearly all accounts.  This is definitely a card for only the most extreme and hardcore enthusiast that wants not only the highest performing parts they can find, but also some bragging rights to take with them to the school yard.

Be sure to use our price checking engine to find the best prices on the standard Asus 7800 GT and anything else you may want to buy!