Like most graphics card vendors, Asus has been struggling with the idea of including extras in the box with their cards.  What do users want and what will make a user choose their card over a competitor’s?  Well, the Asus N7800GT DUAL won’t really have the problem but Asus still has a decent mix inside the box.

The most exciting information (though not included in MY box, damnit!) was that Asus is going to start bundling Call of Duty 2 in with the N7800GT DUAL starting on 10/25, when the game is released to the world.  A $50 game that most enthusiasts will probably end up picking up makes the price of the card a bit more appealing, no matter the cost. 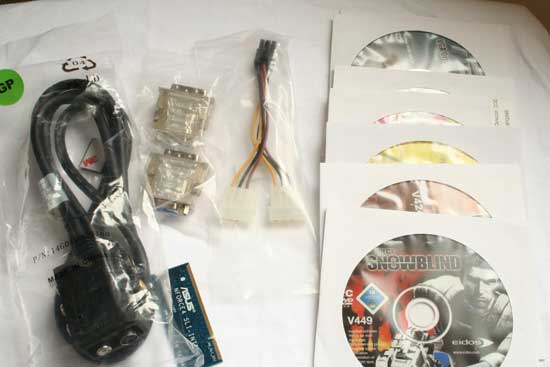 Other than that, Asus has included their normal mixture of parts including two DVI-to-VGA adaptors, a power adaptor, a video output dongle that supports HDTV, and an Asus SLI paddle for Asus’ own Intel-based SLI boards needed to support this video card.  The software mix includes SnowBlind and some other applications for watching and creating DVDs and digital content.

This is something of an issue with this card, and has been since Gigabyte released their first dual-GPU video card a while back.  In fact, Gigabyte went as far as to bundle that 3D1 video card with their own motherboard as it was the only supported combination at first.

The reasons behind the compatibility issues are still not perfectly clear to me, though I do know it has to do with the motherboard manufacturers implementation of the SLI paddle switch responsible for setting either x16 or x8 PCIe lanes to a PCI Express slot.

Your best bet might be to wait until someone tests your particular motherboard with the card to see if it functions, or to continually check out Asus’ website for updates, though I wouldn’t place my hopes on super-timely updates.

Here is the latest list of supported motherboards from Asus as of today:

The reason behind the seemingly random compatibility issue is in fact the implementation of the PCI Express paddle card that most SLI motherboard utilize to switch between x8 and x16 lanes of PCI Express.  Asus is saying not that this video card should work on most AMD-based SLI motherboards from other vendors, but that the Intel-based SLI chipset uses a different method to support SLI so most C19 motherboards will not support it.  It depends greatly on the implementation of the vendors switch card.

Even more detailed information on the issue at hand.

This is a standard PCI Express graphics card connection diagram.  All x16 cards are setup so that lane 0 of the PCI Express bus (going from 0 to 15) starts at the left hand side of the and continues across to the right up to the 15th lane.  For SLI to function on a motherboard, the paddle card between the two PCI Express slots has to take a physical x16 connection and split it up between two slots, giving each 8 lanes of PCI Express bandwidth.

What does that mean in relation to the Asus N7800GT DUAL?

This is a diagram of the PCIe connections on the N7800GT DUAL card.  The lines going up from the left half of the connection go to GPU1 and the traces heading off in the right direction go to GPU2.  PCIe connections 0-7 go to the first GPU and connections 8-15 go the second GPU.  Since we know that the AMD-based A8N-SLI divides the PCIe lanes up identically with the switch board, the video card has no problems working with that configuraiton.  However, the Intel-based P5ND2-SLI alternates between connection lanes to the north and south bridge, and therefor the N7800GT DUAL can not make the connections properly.

Asus has included a new paddle board that corrects the issue on their P5ND2-SLI series of motherboards but they claim that the card is not compatible with competitors motherboards.

Now, if we can get the details of how each SLI motherboard implemented their SLI paddle card we can know for sure whether or not it is going to function with this Asus graphics card.

I have already been asked whether or not this card requires special drivers from Asus in order to work correctly.  The answer is no, as we used the standard 77.77 reference drivers from NVIDIA’s website for this review.  In Windows, the N7800GT DUAL actually shows up as two separate devices, each a 7800 GT card.  The NVIDIA drivers install as normal and you can enable and disable SLI just as you would normally.  All the driver features are available and usable.