The biggest problem against the Presario V2410 is the poor battery life. With just over 2 hours of continuous usage (with or without WiFi), it doesn’t bode too well for a business traveller on a long trip. For general users it’s not too bad since an electrical outlet is usually nearby. Students should plug in their V2410 after 2 classes.

However, despite the battery there are some really nice aspects to the V2410. First the CPU is 64-bit which means the V2410 is ready for Windows Vista when it is released next year. Currently Intel does not have a 64-bit mobile CPU, so if this is something that concerns you the Turion 64 on the V2410 is a good solution. Secondly the graphics are great. The 14″ WXGA screen is very vivid when viewed at a slight tilt and extremely sharp. The ATI Xpress 200M chipset with the X300 graphics gives some nice features like dual-video output (triple if you use S-Video). 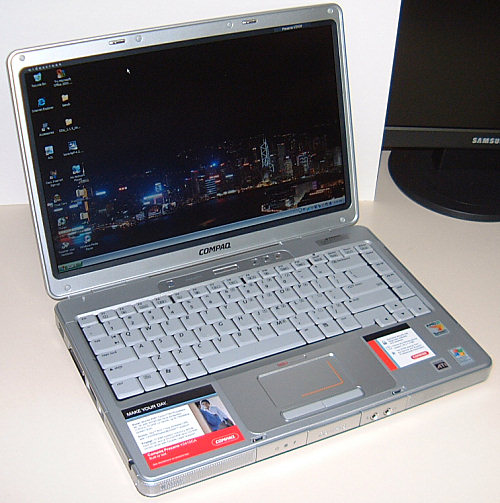 Bring on Windows Vista!
To take full advantage of the next version of Windows there are two big requirements: a 64-bit processor, and a compatible video card. The Presario V2410 has both! The Turion 64 ML-30 CPU is 64-bit so you’re all set for the processor, and the Radeon X300 onboard is reported to run the Vista Aero Glass interface perfectly fine (according to users with access to the beta). So if you need a laptop now and want to run Vista in the future with full support, then the V2410 is a great choice.

The Battery Trade-off
The Compaq Presario V2410 is a strong 14″ laptop with many convincing features. The screen is sharp, there’s a 64-bit CPU, it looks great, and best of all it’s priced cheaper than similarly equipped Centrino laptops with the Pentium M 735. The big problem however is the battery. With just over 2 hours of general continuous usage, you may find yourself wishing for a better battery. You can buy the extended battery for a little more, but it will add to the total weight of the laptop.

Final Impressions
Overall I was very impressed with the Presario V2410. It’s reasonably light, looks sharp is every aspect (aesthetics and video quality), has 64-bits, WXGA, WiFi and more. The battery life is a bit of a disappointment and I think for most of you the battery will kill the deal. However, you have to consider that the laptop is designed for home/general usage and intended to be light and portable. You can always go with a competing Intel solution to gain better battery life, but you will lack 64-bit processing.

As far as 14″ Turion laptops are concerned, the V2410 is the only game in town in the budget price range – there’s no competition currently. If you’re looking for a 64-bit laptop with 14″ WXGA and keep within a budget then the V2410 is a clear choice for you. However, the battery life is weak and should be seriously considered before making your purchase.

Feel free to use our Pricegrabber service to help you locate the best deal on this well-rounded laptop! 64-bits and 14″? Look no further!

Ready for 16TB SDXC cards? Intel has you covered, even if you’re not!