This beefy board sports a ton of features, the most impressive of which is not one, not two, but four PCIe x16 slots! Quad-SLI might not be something that will work out but I bet SLI plus running multiple monitors with additional GPUs might entice some.

Though we have seen information on this board before, there was always the lingering thought that it might never see the light of day in a retail form.  Gigabyte has gotten past that stage now and has officially announced the product as the Gigabyte GA-8N-SLI Quad Royal.  This beefy board sports a ton of features, the most impressive of which is not one, not two, but four PCIe x16 slots!

As you can see, the board is loaded with four x16 PCIe slots, two x1 PCIe slots and a single legacy PCI slot.  Now, many questions have come up as to what you might use these four PEG (PCI Express Graphics) slots for.  Of course you can use them for just about any PCIe accessory, but since we have only one option currently available (network cards) then that leaves us with graphics cards.

Before we get into it, no NVIDIA does not officially support SLI on more than two cards, but might it work?  Its very possible with the correct driver.

This slide shows us what configurations the PCIe slots actually come in: 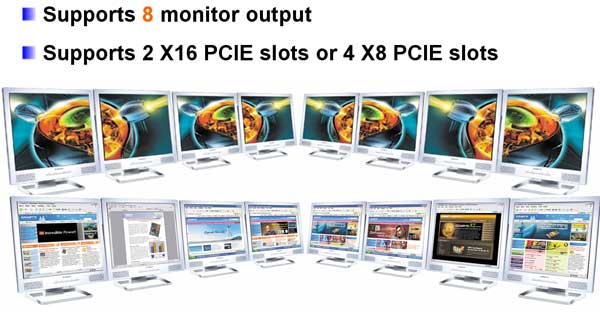 With four GPUs you can support up to eight monitors!  But, some people have been thinking that all four PCIe slots would run at a full x16 speed, and as we can see here, that isn’t the case.  The options are to have two full x16 PCIe slots for four x8 PCIe slots, which should be enough bandwidth for the forseeable future.

This comparison table looks at the Quad Royal and the Asus P5N32-SLI motherboard.  From it we can learn that Gigabyte has essentially used the same chipset as the other X16 motherboards but is giving the option of breaking down their x16 PCIe connections into seperate x8 connections, much like the original NF4 SLI chipset did.  Also, you can see no retail price has been set yet…ouch.

This final table breaks down the settings for the Gigabyte Quad Royal motherboard depending on your desired GPU configuration.  If you plan on having two ATI and two NVIDIA cards, Gigabyte recommends setting the north bridge paddle in SLI mode and putting the ATI cards in the first and second PEG slots.  If you look at the options you can now effectively have NVIDIA SLI running on your system and still use another ATI graphics card for multi-monitor support and thereby get around the annoyance of disabling a monitor whenever you want to play a game.

This board also supports Gigabyte’s 3D1 series of dual-GPU video cards, and hence I am nearly 100% sure that it will also support the latest Asus N7800GT DUAL card that I reviewed recently that uses two 7800 GT cores on a single card in SLI mode. 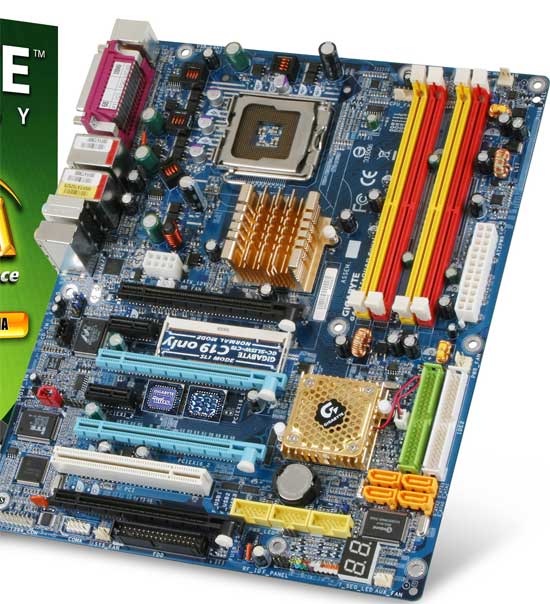 Though I don’t have the board in my possesion yet, you can be sure we are getting one for a review.  It may end up being one of those niche items that is too expensive or has too many quirks to be big in the market, but it sure is the most interesting motherboard we have seen in a very long time.

I am curious to hear your thoughts, so please let me know in the thread I started in our graphics forum!  Also, if you want to see an AMD X16 SLI motherboard in action, check out my A8N32-SLI review posted earlier today.

Though it isn’t for sale yet, you may want to look at prices on other SLI motherboards: