ATI readies their CrossFire card for the recently released X1800 XT and X1800 XL cards. Are you ready to pony up the money for these and will the performance gains be worth it?

It has been just about ten weeks since the release of the X1000 series of graphics cards from ATI that featured a new card for every category — from the low end to the high end.  The X1800 XT was a very formidable card and gave the original 256MB 7800 GTX a run for its money in just about every benchmark.  What ATI was missing from the X1000 launch was really the one thing the industry had been looking forward to and analyzing for nearly a year — a real CrossFire implementation that would take on NVIDIA’s SLI technology for the battle of dual-graphics cards.

We originally reviewed the CrossFire technology with the X850 XT CrossFire card back in September, so if you need a refresher on the technology behind it all, be sure to give that article a look first.  ATI promised us we would see the X1800 CrossFire cards by Christmas time — and they succeeded, if only by the hairs on their chin.  Less than a week before the holiday buying season is over, we bring to you the X1800 XT CrossFire card.

On its outward appearance, the X1800 XT CrossFire (abbreviated as either XF or CF from now on) looks no different than the original, standard X1800 XT video card we reviewed in October.  It uses the same dual-slot GPU cooloer and weighs about the same as well. 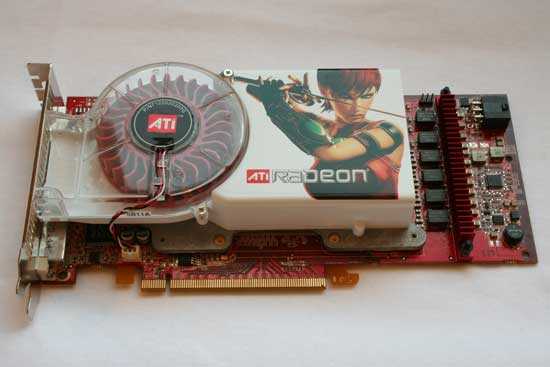 The card itself has specs nearly identical to that of the original X1800 XT as well, sporting a blazing fast 625 MHz core clock and 512 MB of 720 MHz (1.44 GHz DDR) DDR3 memory.  And yes, the original X1800 XT did have its memory clocked at 750 MHz and we are not quite sure why the CrossFire card does not as well.  My guess is that the 1.5 GHz DDR3 memory was causing supply and pricing issues that ATI decided to do away with and try to keep the XF Edition card at as low a price as possible. 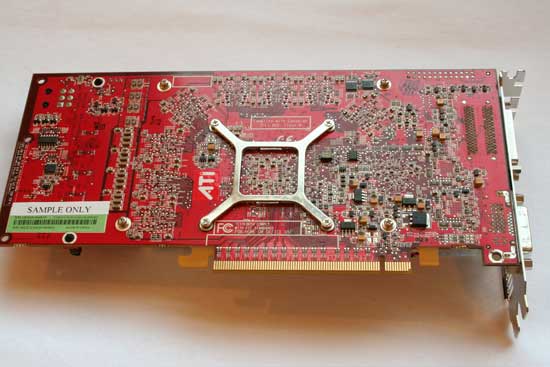 Rear of the X1800 XT CrossFire 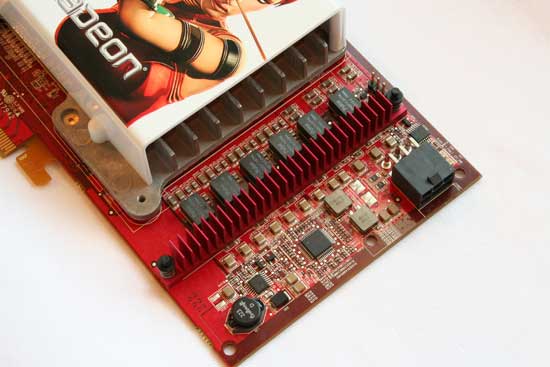 The power connections on the CrossFire card remain unchanged 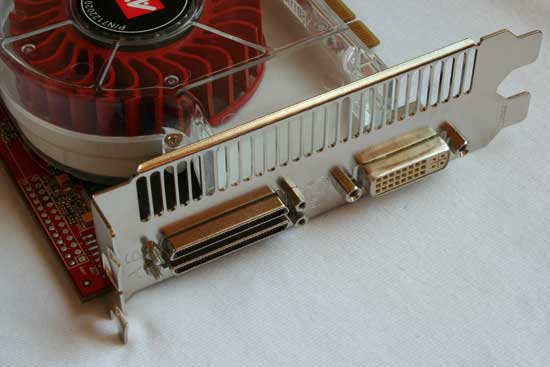 That odd connector on the left is for CrossFire support

By looking at the connectors on the card we can see there is a single DVI connector and an odd-looking fella’ that is used for CrossFire connectivity.  Resembling a sort of SCSI-type connector, it is keyed so that the dongle cable only fits on in one direction to avoid some confusion.

By the looks of it, it would seem that CrossFire cards are not going to be compatible with any type of TV-output or input or even All-In-Wonder support based on the amount of space the the CrossFire connector and logic takes up.  We’ll let you know when we know for sure. 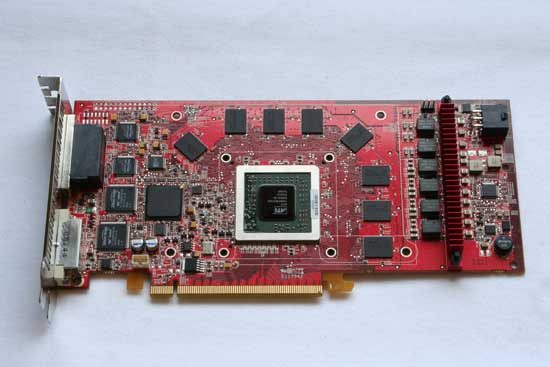 The card it all its naked glory!

Another interesting point is this is the ONLY CrossFire Edition card being announced today.  There are no corresponding X1800 XL, X1600 or X1300 CrossFire cards in our labs, and I don’t think anyone else has them either.  In fact, the X1800 XL looks like it will have to be paired with this very X1800 XT CrossFire card in order to operate in CrossFire mode.  Unfortunately, the X1800 XL only runs at 500 MHz core and uses only 256 MB of 500 MHz memory meaning that half of the memory and a lot of the clock speeds on this CrossFire card are going to be wasted when paired with an XL.

It seems to defeat the benefit of having a value card under the flagship if in order to take advantage of multi-GPU rendering you need the ultra-expensive CrossFire card anyway. 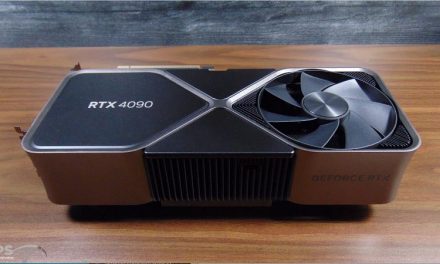