Our power consumption numbers still astound me as I see nearly 400 watts of electricity being used in a single computer, not counting any monitor.  The X1800 XT CrossFire setup comes in a close second behind the NVIDIA 7800 GTX 512s in SLI mode although the CrossFire config has the new highest idle power usage.  Congrats!

There is a lot of information to parse through here in our first look at the X1800 series of CrossFire configurations.  We’ll break it up into multiple sections for easy digestion.

The X1800 XT is an incredibly powerful graphics card in a single GPU configuration and we had high expections for the combination of two of them in a CrossFire setup.  In most of the games we tested we weren’t let down and the X1800 XT CrossFire card proved to be a great performer.  In a couple of instances the X1800 XTs came out as the leader of the pack, but more often we saw the NVIDIA 7800 GTX 512 cards in SLI mode taking the win from ATI.  There is little doubt that NVIDIA made a smart move with the 512MB model release timing – where ATI should have had a performance lead they are now coming up second.  The X1800 XT was powerful enough to scale well with an XT master card in most titles.

The X1800 XL GPU was one of the highs of the X1000 series launch as it offered good gaming performance at a much lower price point than the XT counterpart did.  However, the CrossFire usage model of the X1800 XL is in dire need of a boost.  The performance of the X1800 XL in CrossFire mode was not impressive and more often than not fell behind both a pair of 7800 GTX cards and a pair 7800 GT cards.  For some reason, be it the half-sized memory buffer or the 25% slower core clock speeds, the XL card just didn’t scale with the same finesse as the XT card did in CrossFire mode.  And even in those cases that it did, the NVIDIA competition was more than adequate to steal the thunder. 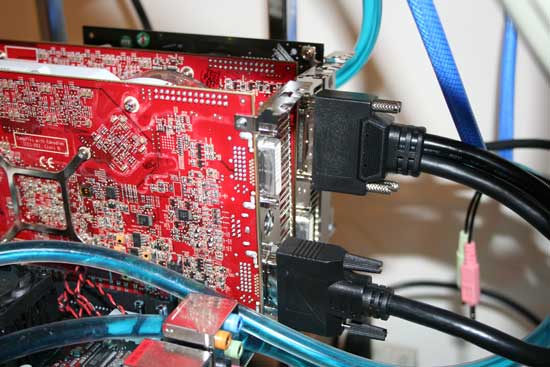 The X1800 XL is a different story completely as you are forced to couple your $350 XL card with a CrossFire master card that is nearly double the cost of your previous purchase.  That makes the XL CrossFire combo total to $950 when it should be something closer to $700.  At $950, you could get that same pair of 7800 GTX 256s that out performs it in every instance, and sometimes by a whole lot.  Even worse, a pair of 7800 GTs will set you back only $620 (roughly) making them the “budget” SLI performance king; and they out run the XLs in nearly all cases as well, for $320 less!  And the nail in the coffin is that the $600 you do buy is only able to use HALF the memory it comes installed with and though it won’t underclock to match the X1800 XL, it might as well as it can render frames as quickly as the XL can anyway.

If you have an XL card now — just hold on to it, and don’t worry about CrossFire unless ATI releases a card with half as much memory and lower speeds and lower price.

The original NDA on this review was the 12th of December but after a logistics bug that apparently kept the dongle cables from reaching ATI in time, the NDA was pushed back to the 20th so that ATI could have availability on the day of release.  Yeah, yeah, we have heard this before right?  If any of you have your doubts, I won’t blame you, but there is something to be said for pushing back the release when they finally found out they weren’t going to make the release schedule they originally had.

I’ll post updates to availability here as I see them for sale.

An interesting side story here is that rumors are persisting that both the X1300 and X1600 series of cards will be able to run in CrossFire mode without the need for a seperate master card and without the need for an external dongle.  If this holds up, and with the recent price drops in the X1600 line up, this could turn out to be a great competitor against the 6600 series that is out living its life span at NVIDIA.

Again, more as we get it!

The X1800 XT CrossFire master card is finally here and all the issues and problems (well most) with the original CrossFire release have been addressed.  It’s not as elegant as SLI yet, but CrossFire gets the job done, bringing multi-GPU rendering to ATI’s constituents as promised.  The XT combo looks like it might just be a worth while investment in graphics technology though the XL combo is definitely a bust for now.

Next stop for ATI is R580 and maybe even integrated CrossFire…?  The world might just be standing on its head!

Be sure to use our price checking engine to find the best prices on the ATI X1800 XT CrossFire Edition, and anything else you may want to buy!