Just as with the original CrossFire implementation on the X850 XT GPU, the logic to handle the feature is NOT built into the GPU itself and instead is built onto the card using third-party components. 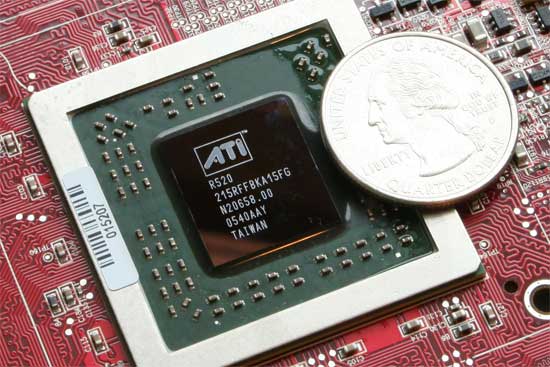 The R520 GPU and George Washington – No CrossFire logic in either

If you remember last time, ATI used a Silicon Image chip to handle the incoming data from the slave card to this X1800 XT CrossFire master card.  This caused one of the major issues with the X850 XT CrossFire setup: the limitation of resolution to 1600×1200 with a max frame rate of 60.  That is not the case with the new X1800 XT CrossFire implementation. 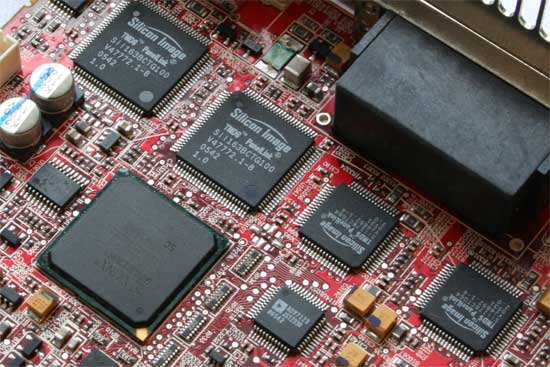 Thanks to the addition of dual-link DVI connections as well as a more capable compositing engine, X1800 XT CrossFire’s maximum resolution has been raised to 2560×1600 (the same resolution as those Apple 30″ Cinema displays).  The two larger Silicon Image chips (seen above) are responsible for receiving the data from the slave card; each chip getting half of the dual-link DVI bandwidth.  The smaller set of Silicon Image chips output the composited image over the dongle cable to your monitor. 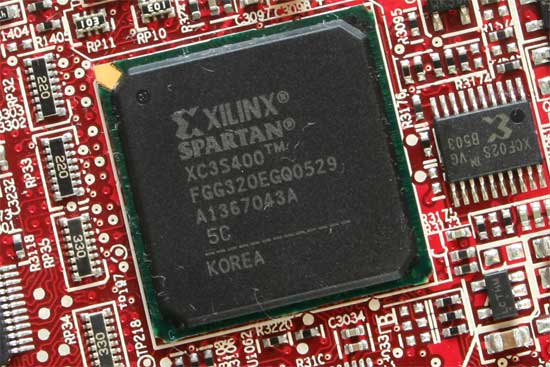 The compositing engine is actually held in here, a Xilinx programmable chip that ATI has programmed for the specific task of taking two images from two cards and mashing them together to form CrossFire.

Not even ATI will tell you that adding these five additional chips to their X1800 XT CrossFire card is the best way to achieve their multi-GPU goals.  But as NVIDIA knows, implementing this kind of technology on the GPU silicon is not a simple task and ATI’s engineers have been trying to play catch up since SLI was released again with the 6800 cards a while back.  When will we see CrossFire on-chip?  It’s quite possible that R580 will be the magic number.

Another requirement of CrossFire solutions is an external dongle cable to move the data from the slave card to the master card as ATI’s implementation does not have a way to transmit data between the cards internally.  The PCI Express bus COULD be used, and looks like it will be used on the X1300 and probably X1600 implemenations of CrossFire, but with a much higher amount of data flowing that the X1800 XTs can support, a seperate bus is required for best performance. 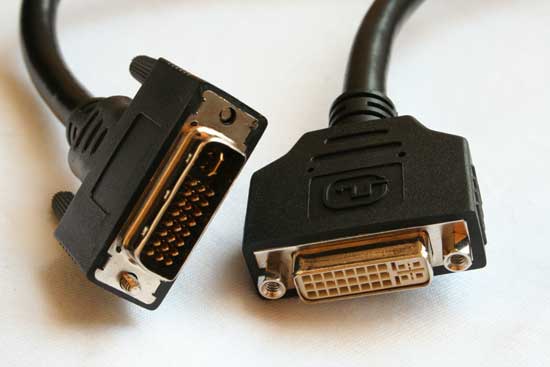 The DVI connectors on the dongle — one for slave card, one for your monitor 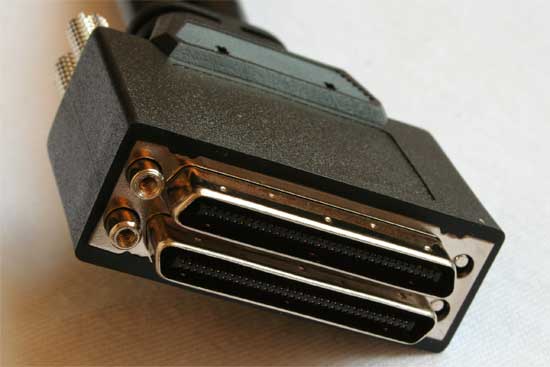 As you can see, the dongle cable on the X1800 XT XF model differs from that of the X850 series.  Both DVI connectors are now dual link and the connection to the CrossFire card uses custom connection as it needed enough bandwidth to receive a full dual-link DVI connection and output one as well to your monitor. 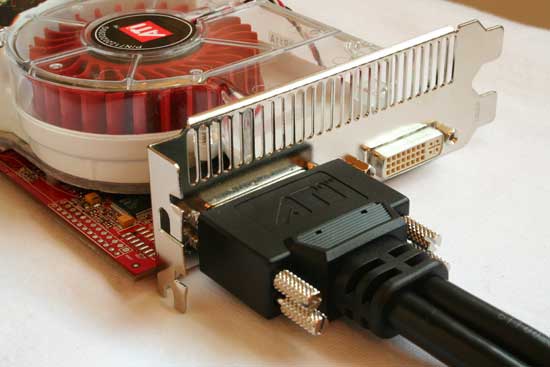 When installed, the dongle cable is a hefty beast to screw into place properly. 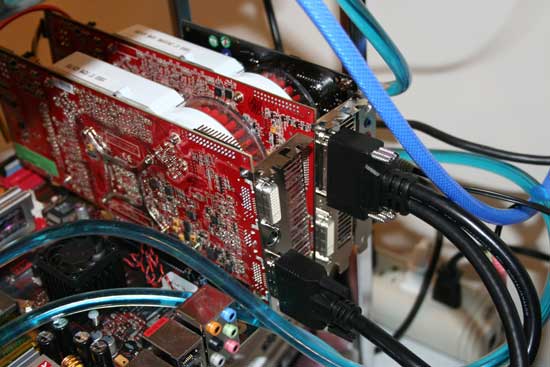 You can see on our test bed how it works — one end of the cable connects to one of the DVI outputs on the X1800 XT slave card and then the monitor is connected to the remaining DVI output section of the dongle.

Though this installation process isn’t really difficult, it is much more cumbersome than that of the easy NVIDIA SLI connection requirement of a PCB bridge between the cards internally.