Intel is announcing a new processor today that packs 4 MB of L2 cache and a 1066 MHz FSB into a 65nm core.

If you ask nearly any PC enthusiast today, you’d probably get the impression that Intel is pretty far behind AMD in terms of performance levels that they, the end user, care about.  And while we are not going to argue the fact that up until today AMD did have the advantage, the point is that this issue is usually exaggerated.  AMD has the advantage on gaming benchmarks and Intel has traditionally been better at media and content creation, but with more powerful GPUs the differences in gaming are getting narrower.  Intel should never be counted out. 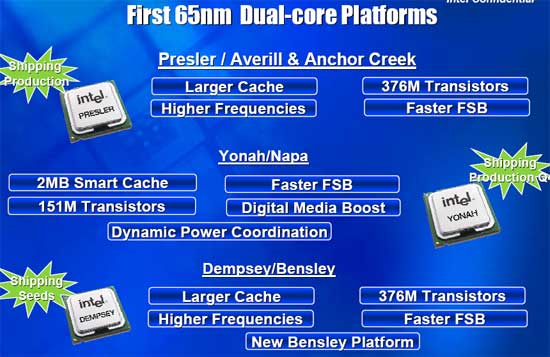 Some slight changes do exist other than the process technology change, the most important of which is the increase of L2 cache from 1MB per to 2MB per core.  The larger caches push the transistor count up to 376 million transistors which is nearly 150 million more than the Smithfield core Pentium D processors.

This table gives us an easy glance at the features on the new Pentium Extreme Edition 955 processor.  The previous Intel Pentium Extreme Edition 840 processor (which was the king of the hill for Intel’s dual-core parts) lacked the 2MB L2 cache and the 1066 MHz FSB that the new 955 processor has which should give the new processor a pretty good performance boost.  The 955 still sports Hyper-Threading on both cores for a total of four logical processors total on this single die.

376M transistors in there…count them all!