As is typical with Intel and new processor technologies, the Extreme Edition 955 processor is coupled not with the Intel 955 chipset but instead with a new core logic chipset in the form of the Intel 975X.  This chipset brings several new features and performance options that might help it actually be of interest to enthusiasts and gamers. 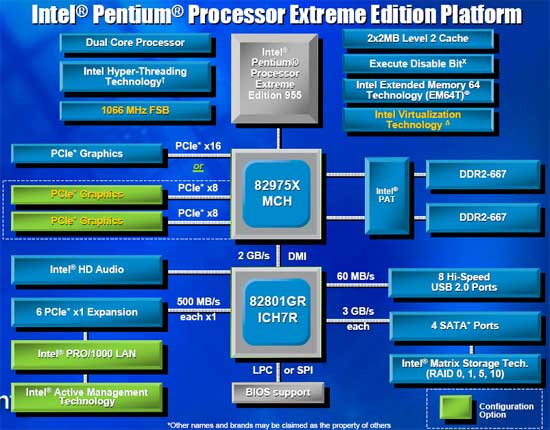 The general chipset diagram gives us a lot of hints on the features of the north and south bridges (the ICH7R is still being used on the 975 as it was on the 955).  The highlighted changes include support for the 1066 MHz FSB (which the 955 chipset actually did have) and support for Intel’s Virtualization Technology.  The ability to split the primary graphics card connection into two x8 PCIe slots MAY allow for SLI and CrossFire support if future drivers from NVIDIA and ATI support it.

This table provided by Intel summarizes the features of the 975 chipset — not much has changed from the 955 family. 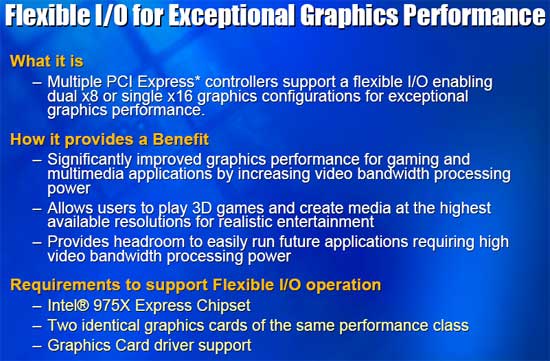 This slide outlines Intel’s tentative support for SLI and CrossFire — pending on “graphics card driver support” as noted at the bottom.  Intel is basically repeating the mantra of NVIDIA and ATI with their multi-GPU platforms here by telling us how much better gaming performance can be on a multi-GPU configuration.  As of this time though, Intel doesn’t have official support from either player, but that is very likely to change in the new year.

Sample benchmarks from Intel place the new Intel XE 955 processor on top of the entire suite of tests run here that include Sysmark, 3DMark05 and PCMark05 along with the scientific computing SPEC tests.

And finally, Intel provided sample numbers of the same configurations and adding one with dual graphics support.  In the 3DMark05 test Intel saw a 35% increase in performance and moderate changes in PCMark05.