AMD finally puts dual cores in their FX line of processors but sacrifice 200 MHz to the previous FX flagship CPU. Does the FX-60 have it what takes to be the new top CPU in the land?

The AMD Athlon FX line of processors was first introduced WAY back in September of 2003 with the release of the 940-pin FX-51 processor running at 2.2 GHz.  At the time, it was the only desktop processor to NOT run on the 754-pin socket.  My, how times have changed.

AMD released their dual core processor line up in May of 2005, just over 7 months ago.  At that time, the flagship processor brand, the Athlon 64 FX, remained a single core processor, with AMD stating that single core CPUs were still the best for gaming.  Most reviews found that indeed the FX-55 running at 2.6 GHz was faster than the X2 4800+ processor running at 2.4 GHz in nearly all gaming applications.  The FX-57 released earlier this year increased that gap a bit more.

With today’s release of the Athlon 64 FX-60 processor, AMD is saying to the world, “we are ready for dual-core gaming.”

The Athlon 64 FX-60 processor is pretty much a speed bump of the already existing X2 line up of dual core processors from AMD.  The specifications of the latest AMD processors is seen in this table:

As you can see, the Athlon 64 FX-60 takes the top frequency of all the dual core processors in AMD’s lineup, but is still 200 MHz slower than the top single core processor, the FX-57. 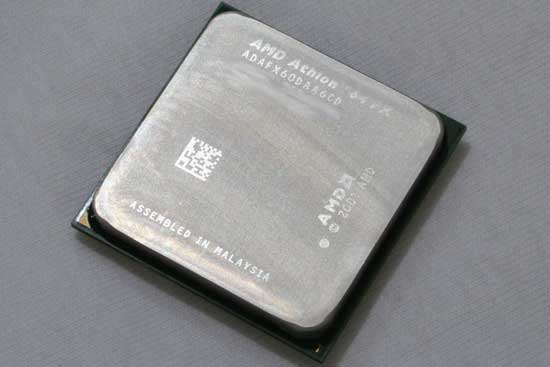 The FX-60 remains a 939-pin CPU and will run on a voltage ranging from 1.35-1.40v.  It is still manufactured on the 90nm process as all of AMD’s dual core processors are.  No other specific information was provided to us from AMD prior to launch.  We’ll update this page with more information as we get it.

What can we expect from the FX-60?  With a higher frequency than the 4800+, we should have the fastest available dual core processor in our hands and we will probably see gaming performance at least on par with the FX-55 processor.  Let’s start with the benchmarks.