The initial Athlon X2 line of processors were very impressive from a power consumption viewpoint; they added an entire other core to the CPU die yet still maintained a similar power usage model than the previous FX and 64 processors.

And with the FX-60 processor, we see that trend continue.  It uses just 8 more watts of power under a full load than the 4000+ does yet it has a tremendous performance advantage in nearly all instances.  AMD still has this ace up their sleeve that Intel won’t be able to match until at least the middle of 2006.

The Athlon FX-60 processor launch is really only a slight bump in frequency over what is already available in the market, but the implications of having AMD finally move their FX line to dual cores might mean more than that.

The performance of the new FX-60 processor is where I had expected it would fall; with a 200 MHz speed bump over the Athlon X2 4800+, modest performance gains were all we were really going to see.  Having said that, it doesn’t make the numbers and results we have shown here any less impressive.  The X2 4800+ processor was the dominant force in nearly all of our benchmarks before this release (with the exception of gaming where the FX line had dominated) and any head room the Intel Pentium XE 955 gained last week is pretty much already out the window with the FX-60.

The gaming performance of the FX-60, however, wasn’t a jump over the previous FX-57 or even the FX-55 in most cases.  Gamers that are going to put a $1,000+ CPU in their systems are going to have top level GPUs as well, and there currently is NOT a big jump in gaming performance with dual cores in most cases quite yet.  We are getting there however as we have seen SMP patches released for both the Quake 4 and Call of Duty 2 engines in the past couple of weeks. 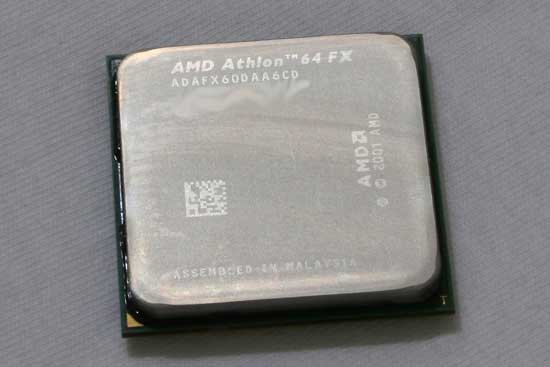 The multitasking tests we ran showed that the FX-60 is more than capable of handling any kind of situation you throw at it; and this one place where the FX-60 can really shine when compared to the FX-57 and FX-55 processors.  The latest Pentium XE 955 processor still has the performance lead with its four total threading capability and heavy multitasking users should take that into consideration.

The current top FX processor, the FX-57, is selling for over $1000 as of the 9th of January.  We traditionally see the flagship CPUs from BOTH Intel and AMD launch at the $1000 or price level, and I would expect to see the same here.  However, seeing as the FX-57 price has yet to drop since its initial launch, its very probable that the FX-60 will stay at this high price level for the immediate future.

A thousand bucks for a CPU is a lot for anyone to shell out.  But if you have the dough, this is where to look.

The AMD Athon 64 FX-60 processor brings a new level of performance to AMD’s desktop processor line up.  Nothing from Intel’s current arsenal can really compete with it with any regularity and it will probably remain that way until at least Q3 of 2006.

Be sure to use our price checking engine to find the best prices on the Athlon 64 FX-60, and anything else you may want to buy!