Whenever you are going to run a brand new flagship video card, you need to check out your power supply to see if it is up to snuff.  If you are running two of them, well, just plan on buying a new one!

The R580 is the real deal, there is no denying that anymore.  Many of us may have thought that the results we saw on the R520 were going to be indicative of the R580, but ATI kept assuring us they had a winner with the X1900.  Turns out they were right.

Without a doubt, the Radeon X1900 XTX is the fastest graphics processor to grace the PC Perspective test bench.  While it didn’t win all the tests we threw at it against the likes of NVIDIA 7800 GTX 512, it came awfully close.  In several cases, the wins were big.  Look back at Far Cry, the Canals09 level of Half-Life 2, FEAR and Call of Duty 2; the wins there aren’t the work of any driver hacks or fancy work-arounds.  The 48 pixel pipes in the X1900 architecture are hard at work in those tests and ATI’s decision to beef them up in such a considerable way really is paying off. 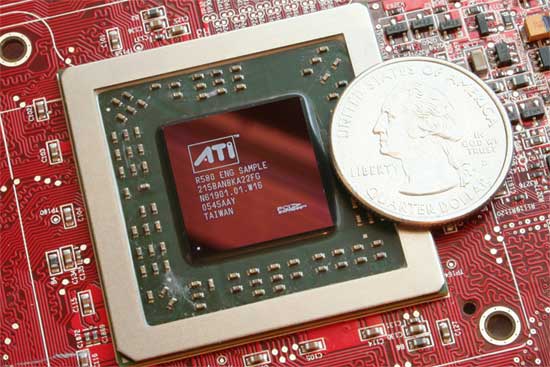 Having CrossFire availability at the initial X1900 release is a big step forward for ATI’s CrossFire program and shows that they are serious about getting their technology out there to compete with NVIDIA’s SLI.  However, I can’t help but be a little dissappointed about the CrossFire implementation in this case.  The X1900 CrossFire Edition is based off of the X1900 XT, not the XTX, and as such the amount of performance scaling going from one single X1900 XTX to running that same card on a CrossFire motherboard isn’t as impressive as it should be.  In many of our tests where the single XTX trampled over the 7800 GTX 512, the CrossFire X1900 XTs fell behind the 7800 GTX 512s in SLI mode by a small margin; a margin that the extra 25 MHz core and 100 MHz memory clocks probably would have overcome.

Had ATI put their XTX at the helm with the CrossFire Edition running at the same speeds, chances are good we would have seen a complete benchmark run through by ATI.

This begs the question as to why ATI didn’t do that?  After all, that’s what they did with the X1800 CrossFire card — it was based on the X1800 XT flagship.  Maybe they got too much flack for forcing buyers of the cheaper X1800 XL to put out additional money for frequency and memory they couldn’t utilize?  Or maybe they don’t plan on selling as many CrossFire cards as we might expect and thus they didn’t want to waste X1900 XTX GPU inventory (that will be at a lower yield) on them?  But as confident as ATI is about their availability issues for today’s launch, I can’t see that being the case either.  I guess we’ll wait to get some comments back from ATI on this later today.

The MSRP of the X1900 XTX is set at $649 from ATI and if the resellers, with the cards in stock today, keep things sane at around that price, then ATI will have a big win on their hands.  With the 7800 GTX 512s selling out across their initial inventory at more than $750 in many cases, a card that performs better and is cheaper will be a no brainer for most gamers that are already willing to spend that kind of money.

In reality though, I think the slightly slower X1900 XT is going to be the most popular model.  AT $100 less in price, you lose out on 25 MHz of core speed and 100 MHz of memory speed, but chances are good you should be able to squeeze that out of an XT card with a little overclocking finesse.  The XT models will also probably be easier to find.

The $599 price tag on the X1900 CrossFire Edition is a reasonable premium over the $549 price of the same spec’ed X1900 XT card.  The additional logic and dongle on the CrossFire card do cost a bit of extra money to produce and add on the card, and users planning on spending a grand on GPUs will find the X1900 CrossFire to be a much better deal than a pair of 7800 GTX 512s.

Finally, though we couldn’t test its performance here today, the X1900 All-in-Wonder might turn out to be a surprise winner as well.  Its clocked significantly lower, but we’ll have to see how that affects overall gaming scores once we get a hold of one.  And the advantage of great video support, single slot cooling design and a $499 price tag make it even more appealing.

As of this writing, parts are starting to show up in our Pricegrabber engine for the Radeon X1900 XTX, the Radeon X1900 XT and even the Radeon X1900 CrossFire Edition.  The only one missing from e-tailers today is the X1900 All-in-Wonder, which I was told yesterday would be for sale on ATI.com today and would be in stores within a couple of weeks.

ATI has assured the media this time around that there will be no “phantom editions” of any X1900 parts.  They say they have “tens of thousands” of parts already shipped out and warehouses and e-tailers have “thousands” already.  We were even sent this show of a Newegg warehouse prepping some X1900s for today’s release last night: 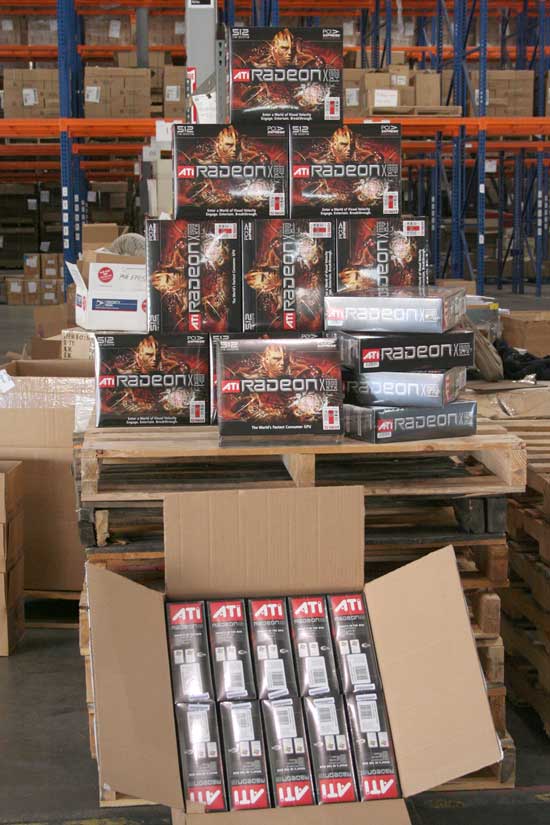 If things stay on track for ATI, NVIDIA is going to be sitting with their hands to their heads wondering what went wrong.  After a series of strong hard product launches, the 7800 GTX 512 has been missing since only a week or so after its release last year.  NVIDIA claims to have more on the way, starting this week, but let’s see if the supply channel can stay open this time.

ATI’s R580 architecture was built up to be the company’s saving grace, and it turns out to have been correct.  The X1900 XTX is the fastest GPU we have ever tested and is going to give NVIDIA some headaches until they can get their 90nm G70-based parts on the market with higher clocks and/or more pipes. The immediate availability of four X1900-based cards, the XTX, XT, CrossFire and All-in-Wonder, really shows that ATI has tweaked their 90nm technology and has things rolling in the right direction once again.

For now, ATI can enjoy the lead in performance, a lead in stock on flagship products and a first step in regaining the trust of the gaming and enthusiast community.

Be sure to use our price checking engine to find the best prices on the ATI X1900 XTX, and anything else you may want to buy!