Intel had a big week at the show with several important announcements coming out that will definitely define the future of the company.  The Centrino Duo announcement finally brought dual core Yonah core processors to the Napa mobile platform that we have all been hearing about for quite some time.  The VIIV announcement brought Intel’s platform-based marketing and engineering forces to the desktop market in a similar way as they did with the mobile-based Centrino name. 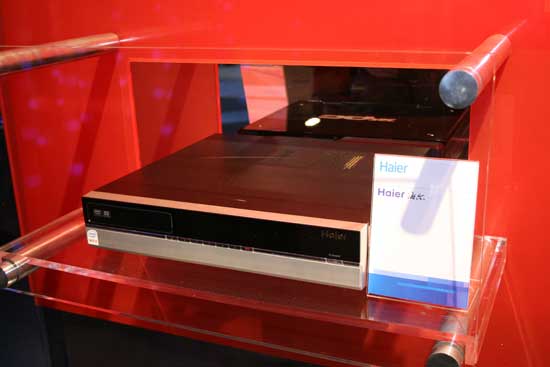 VIIV (rhymes with “live” and “five”) is a platform solution that Intel is introducing to institute standards for home entertainment based PCs.  VIIV requires certain hardware and software specifications to be met including a dual core processor, an Intel core logic chipset and a certified wireless solution as well.  Systems must meet those and other requirements to gain VIIV qualification. 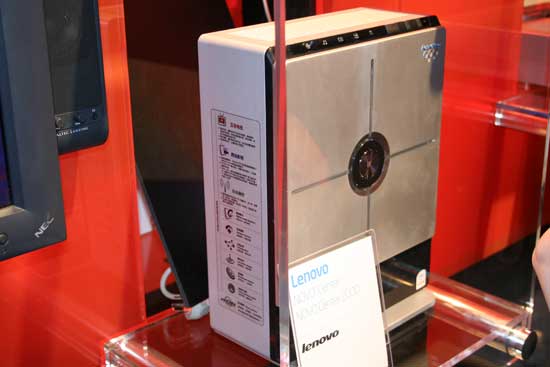 PCs based on VIIV technology are aimed mainly at the home theater / home entertainment markets and are basically a way of guaranteeing that all computers using the Microsoft Windows Media Center Edition meet a lowest-common-denominator of hardware support as well.  This should greatly help the MCE market grow as hardware compatibility has been an issue in that field since the beginning. 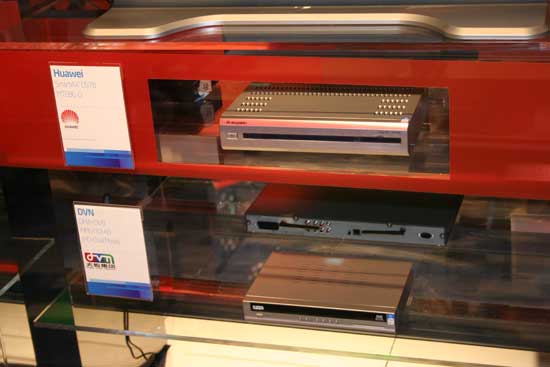 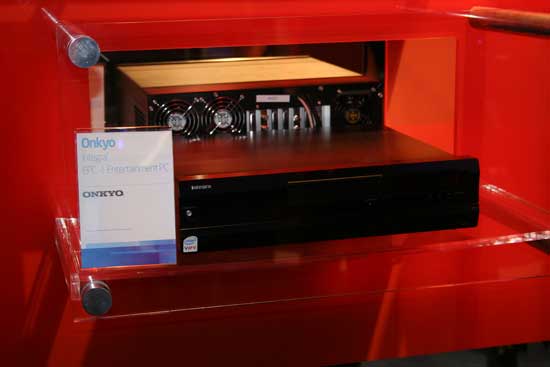 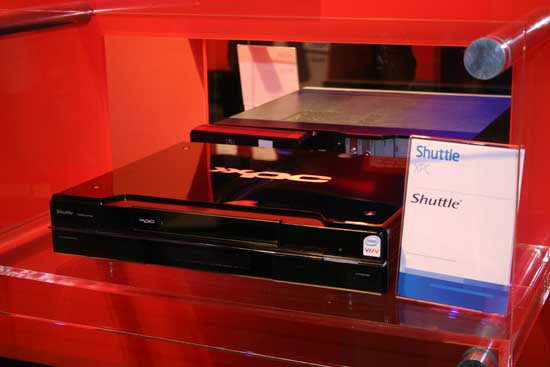 As you can see there are lots of form factors and sizes on display for VIIV technology, and this Shuttle XPC based system above is probably my favorite from the show.  It looks very slick and could fit in well with most home theater configurations. 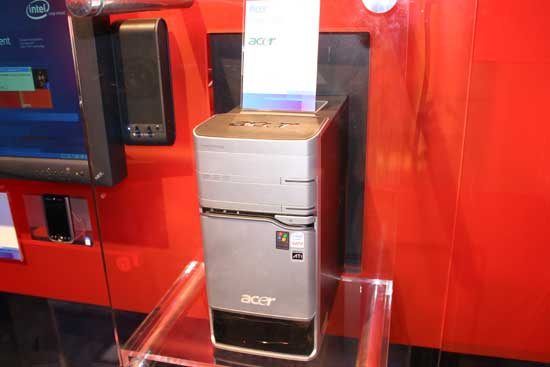 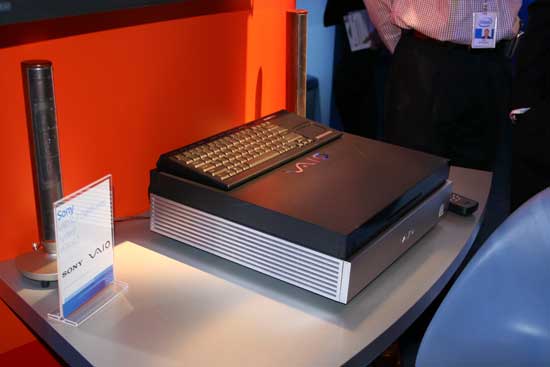 This Sony system is the first to bring HDMI to the HTPC market as well. 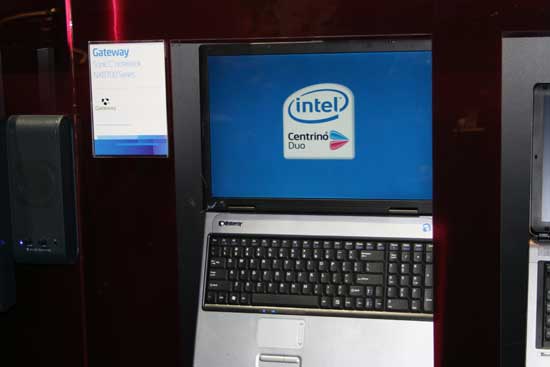 The other major announcement was the new Centrino Duo platform, based on a dual-core Yonah processor and Napa platform.  The upgraded processor, bus and memory and a pretty significant performance gain to the mobile systems, without an increase in overall power consumption. 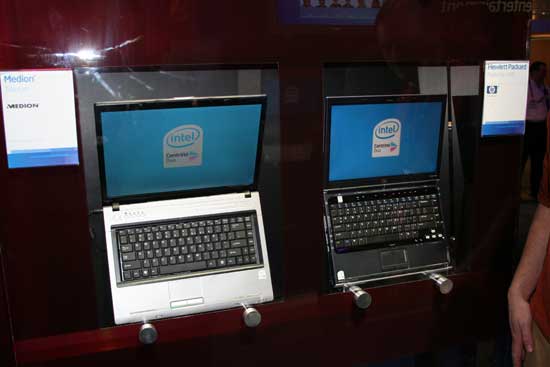 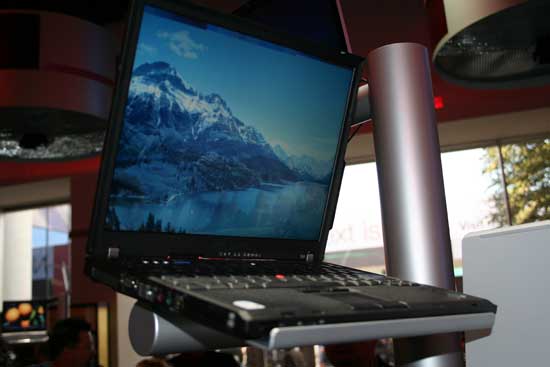 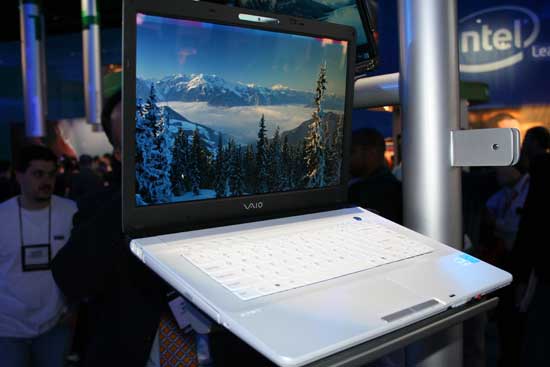 There were dozens of Centrino Duo notebooks on display from all the major notebook vendors including Dell and Sony.  I smell an upgrade for my personal laptop coming!

The above links to our video coverage of the Intel booth and shows various VIIV PCs and Centrino notebooks in action.

Scene-by-scene: odd dangly-thingy decorations, VIIV PCs in various form factors, the people playing the racing game are on Pentium XE 955 systems that were overclocked by Gateway to over 4 GHz, the Centrino Duo notebooks are playing Call of Duty 2, lots and lots of Centrino Duo wins on display.

AMD tried to counter the VIIV announcement at CES with its own AMD Live! announcement.  While definitely not a creative or innovative name for their program, AMD touts open sources and open choice for hardware vendors versus the need to commit to mostly Intel-based chips in the VIIV solution. Obviously this is a requirement from AMD to survive in the desktop / home entertainment market and we definitely hope they have some success so Intel simply doesn’t walk away in the segment as they seem to be doing on the notebook side of things. 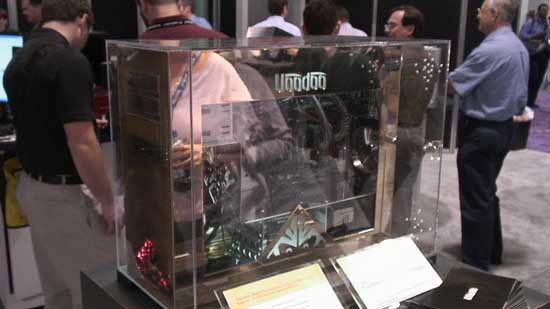 AMD didn’t have much at their small-ish booth at CES, but they were sporting a couple of cool Voodoo PC systems like this 24k gold computer.  The case is actually covered inside and out with 24k gold and sells for around $15,000.  Um, yeah. 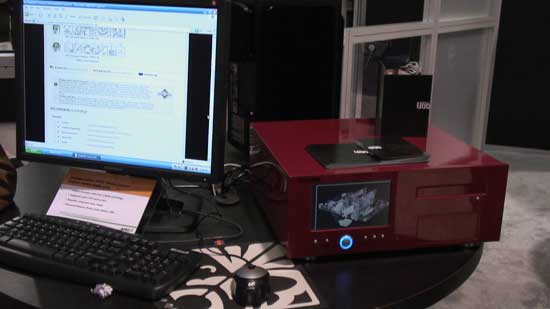 This is Voodoo’s foray into the home theater based PC market and looks damn nice and comes with a front panel display.  Hopefully we see that well integrated and used intuitively. 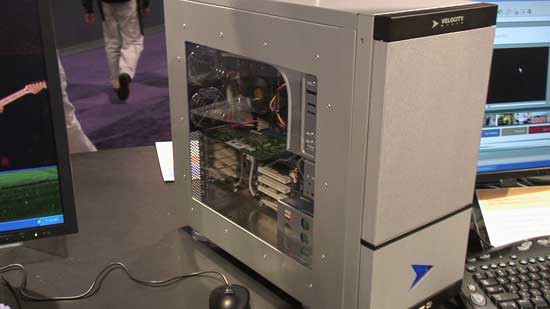 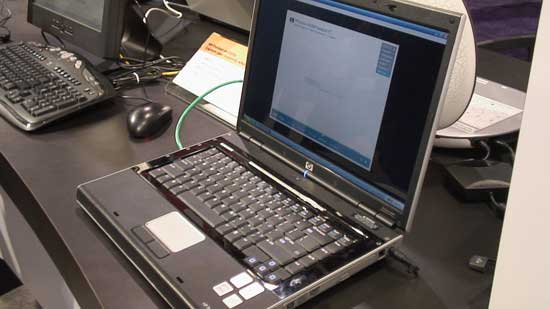 Several other system builders were on display including this Velocity Micro system and a few Turion-based notebooks as well.  It was nothing close to the dominance that Intel displayed in the Centrino section of their booth, however.

The above links to our video coverage of the AMD booth and the two Voodoo PCs and other systems on display.