Yes you read that right

Update (01/11/05): I have posted the rest of my CES 2006 coverage today and anyone interested in this article might also find my NVIDIA and Dell pages interesting as well, as I have more photos and information on the Quad SLI product including videos of the system in action!

Today at the Consumer Electronics Show, Michael Dell unveiled a new project that he and the gang at NVIDIA have teamed up on that until right this minute, no one had heard a peep about in the industry.

NVIDIA is introducing a new video card with TWO 7800 GTX 512 GPUs on it with two PCBs.  Oh, and these new cards will sport 1 GB of total memory as well. 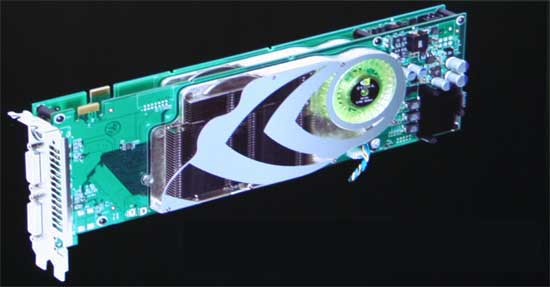 What you are looking at is a picture of a slide of the new flagship video card.  I was able to get some quick technical information on the new card and the technology behind it from NVIDIA just a couple hours ago.  First, you’ll notice there are two physical PCBs on this one, dual slot video card.  Each PCB sports a single 7800 GTX 512 GPU and 512 MB of GDDR3 memory.  The cards are longer to support the added logic involved in these cards and to allow the cooling device to be bigger as well.

There is a new chip on the card that NVIDIA developed that acts as a physical PCI Express bus splitter.  It takes the single physical X16 PCIe slot that is fed to the card and splits it into two full X16 PCIe connections; one to each GPU.  This logic is then responsible for the merging of the data back into a single X16 PCIe connection when it goes back across the bus.  The two PCBs are connected under the SLI bridge connections with a custom interconnect that allows the two GPUs to function in SLI mode.

Also you’ll see there are TWO SLI bridge connectors on this single card — each of those will be in use when your pair up two of these bad boys. 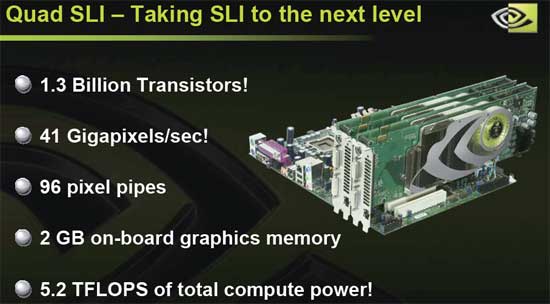 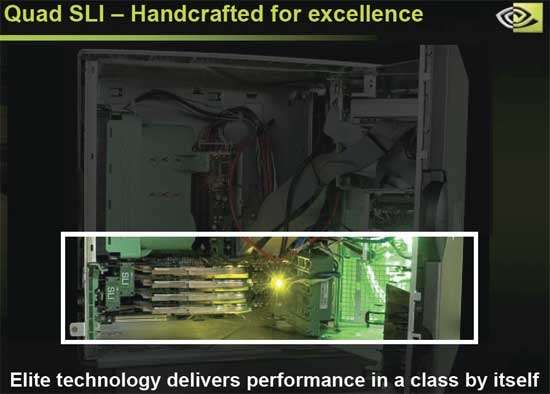 This is a shot of the new Dell system sporting two of these cards and four total 7800 GTX 512 GPUs!  You can see that it really looks like four slim cards lined up in a row, and here you can see the two SLI bridge connections necessary for SLI to run.

This is a zoomed up version of the previous photo. 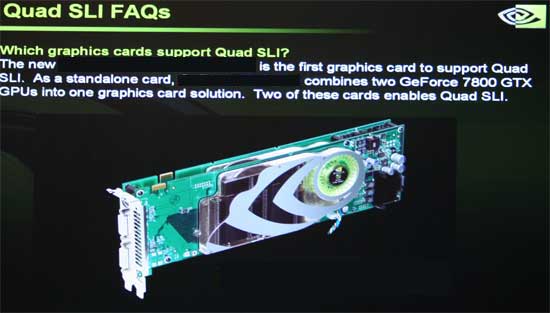 You can read in the slide that this is the first and only card to officially support quad SLI modes.  While Gigabyte and Asus did beat NVIDIA to the punch with putting two GPUs on a single card, NVIDIA looks to have perfected it. 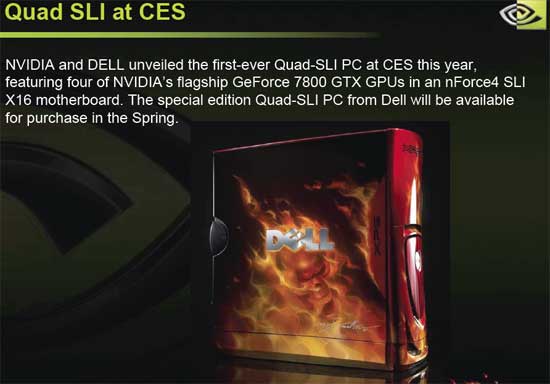 The Dell system based on these new graphics cards will be as shown and should ship in spring of 2006, not the late Q1 mentioned in the slide. 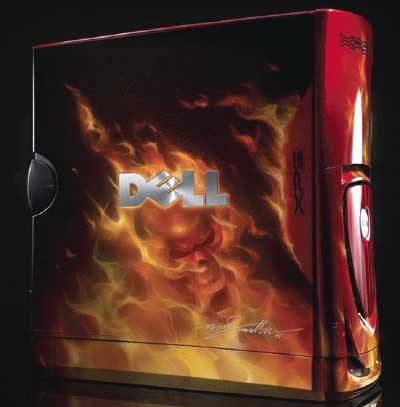 Damn that is a nice looking case!

What other information about this card do I have to share?  First, this configuration is designed to work with NVIDIA’s own X16 chipsets only as they provide a full X16 of bandwidth to both PCIe slots in the SLI mode and is necessary for the amount of graphics horsepower we have here.  Second, there is no word on the cost of these cards or if/when they will be available to the end user market — chances are they will be eventually, but it won’t be until near E3 if it happens is my guess.  Before they are in the channel though I expect we will see Alienware, Falcon and those guys selling systems after Dell gets a healthy head start.

Consider the standard Dell SLI system costs around $3-4,000 you can expect this custom designed PC to cost at least double that.  So start saving those pennies!  But hey, if you have to get the best…

I’ll have lots more information on this system tomorrow as the demo system becomes available for poking and proding.  I’ll be sure to bring that video camera as well!  Keep checking PC Perspective for more CES updates!

Update: NVIDIA asked us to remove the images/text that included any naming for the new video card as they are not yet finalized on branding.

Be sure to use our price checking engine to find the best prices on the other NVIDIA GPUs, and anything else you may want to buy!

RV770 could be ready by June