nForce for the Whole Family

NVIDIA is announcing two new chipsets for the Intel platform, aimed mainly at the mainstream and budget markets. You won’t find quad SLI systems in here, though maybe you’ll find a new system for mom?

NVIDIA’s forray into the Intel chipset market began near the middle of last year with the release of the nForce4 SLI Intel Edition chipset.  This product was aimed at the high end of Intel customers including those with gaming purposes in mind.  In August, NVIDIA and their partner Dell announced another Intel platform chipset, the nForce4 SLI X16, shooting for an even higher-end motherboard market.

While getting these high performance chipsets out into the market was important to NVIDIA, in reality, the big rewards aren’t in the high end chipsets.  Though they may bring in high margin, they are low volume.  The real meat and potatoes is in the mainstream chipset market, where all the $600-$1500 PCs are sold at to everyone from the college grad to grandma.  There is no doubt that with ATI’s continued partnership and success in the Intel chipset market, NVIDIA was a bit angry and wanted some of that action.  Of course no one will admit anything, and that’s what we expect now.  In either event, NVIDIA has prepped some new offerings being announced today.

Today NVIDIA is announcing a pair of chipsets for the Intel platform: the nForce4 SLI XE and the nForce4 Ultra.  The first one is a replacement of the original SLI chipset and the latter is a new chipset for the budget-minded motherboard market.

This Intel line up looks pretty similar now to what NVIDIA has on the AMD side of things, minus an integrated graphics chipset solution.  What has changed on these new chipsets?  Let’s take a look at each.

As I mentioned above, the nForce4 SLI XE chipset for the Intel platforms is a replacement of the original nForce4 SLI Intel chipset that was released last year and has been selling in systems and boards since then.

There were very few changes made to the logic on this chipset; one is that it now officially supports the Pentium D 820 processor, where as before the nForce4 SLI chipset did not — it was a mistake on NVIDIA’s part from the beginning.  Other changes include the SLI XE chipset no longer having the NVIDIA secure networking engine, there is only support for 8 USB channels instead of 10, and support for the HD audio Azalia codec is now included.

This NVIDIA chart attempts to show their advantages over the similarly priced Intel 945P chipset, though it is obviously a bit biased.  What does “storage features you can actually use” mean anyway?

This table shows the relative performance between the two new NF4 chipsets and the Intel 945P chipset.  You’ll probably have to look at the larger version to see which benchmarks are compared.  Scaled to 100% based on the 945P performance, the NVIDIA chipset shows the most gain in memory intense applications and gaming applications.  Small to moderate gains are seen during the system tests including PCMark and Winstone tests.

The second chipset being announced is the nForce4 Ultra for the Intel platform.  As you might be able to deduce, there is no SLI support on the chipset and that is pretty much what differentiates it from the rest of the group.

The block diagram shows very similar features to the SLI XE chipset above, though the Ultra does have an additional PCIe slot available on the SPP northbridge.

This table confirms that the only difference between the two new chipsets lies in the SLI XE’s ability to support two graphics cards in the same system.

With a total of four chipsets available for the Intel platform, NVIDIA has a wide range of prices they can now hit for system builders and enthusiasts.  Boards ranging from $250 down to < $70 are expected to be hitting e-tailers in the next month or so.

NVIDIA told us they have been shipping the chipsets to motherboard manufacturers for several weeks already, they are already selling in the Asian markets, and they should be over in the US withing a couple of weeks.  Of course, its in the hands of the board vendors now. 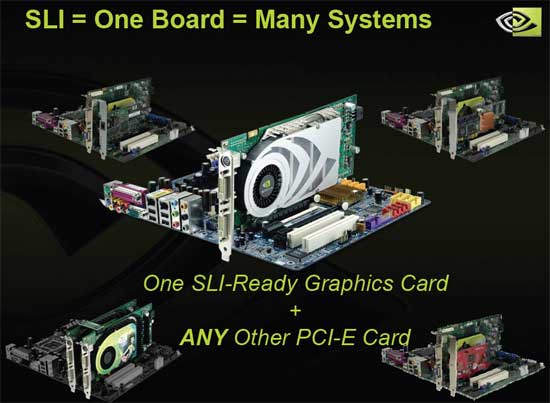 Many of our more astute readers will wonder why NVIDIA would be marketing an SLI motherboard, especially on the Intel platform, to budget minded builders and buyers.  The answer lies in this slide; they want people to know that an SLI PCIe slot is really just another expansion slot as you would find on an nForce4 Ultra motherboard, except that on this board, a user can go to SLI mode later if they choose.  NF4 Ultra buyers can not.

This final table summarizes where each chipset has its strengths and weaknesses.  The new SLI XE and Ultra chipsets have the advantage of HD audio support with Azalia but fail to implement the secure networking engine that was seen in the SLI and SLI X16 chipsets.  A drop to eight USB 2.0 ports shouldn’t be a big deal for most users.

NVIDIA’s release of two new chipsets for the Intel market that aim at mid-range and budget level of consumers is a necessary move if they want to make any headway into the Intel platform market share that Intel’s own chipsets dominate.  ATI already has a clean grasp on the Intel leftovers thanks to their growing relationship and Intel’s usage of ATI chips on their motherboard designs.  End-users looking for a budget box upgrade may find the SLI XE and Ultra core logic sets intriguing, if not overly exciting.  The enthusiast market is going to be waiting for Intel’s next new processor line-up before thinking of moving from the green guys to the blue, and neither of these chipsets are aimed at that market.

As we alluded to in the beginning, there is nothing terribly exciting in this announcement today, except that you might be seeing NVIDIA’s chips in more and more white boxes and Dell systems than you ever imagined.

Be sure to use our price checking engine to find the best prices on the NF4 SLI X16 Intel Edition, and anything else you may want to buy!