The EPoX EP-5NVA+ SLI uses the NVIDIA SLI chipset which means it will perform similarly to other motherboards based on the same chipset. To get a sense of the 5NVA’s relative performance, please see our review of the Intel SLI chipset.

The nice thing about the EP-5NVA+ SLI is that the BIOS allows you to adjust the memory and bus frequencies to whatever you want. This ultimately allows you to achieve the best frequency settings for your hardware through experimentation.

Using these settings in the BIOS, I adjusted the memory frequency down to 100MHz, the CPU multiplier to 14x (down from 18x) and used ClockGen in Windows to slowly bump up the bus frequency. 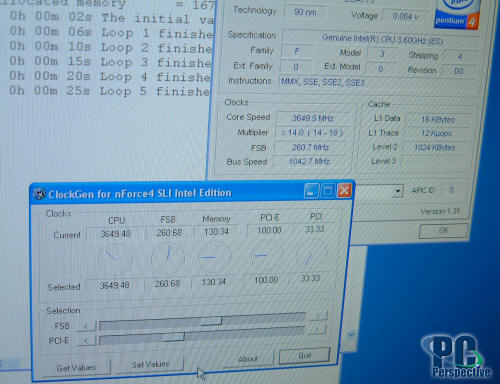 At default voltages and 4x LDT, I was able to get an impressive 1043 MHz bus frequency on the EP-5NVA+ SLI. I played a few rounds of Quake 4 and it seemed perfectly stable. Anything higher I started to get freezing and stuttering in games, and SuperPi was reporting rounding errors.

The hardware I am testing with has been able to get over 1100MHz before, so there’s no other explanation for this except that the 5NVA is holding me back.

In trying to solve some issues with this system (see the next page) I was informed by Corsair that the C19 chipset on nForce 4 SLI Intel boards have limitations that prevent them from going above 1000MHz bus and my results here seem to support that theory. Despite this, a 1043 MHz bus is a great overclocking result.

New VIA Thin Server Board for Eco-Friendly Small Business Storage