Of course, we couldn’t visit AGEIA without seeing some new demonstrations of the hardware in action.  Unfortunately, the list of software that supports its is still pretty low, as the only game out now that will support the PhysX PPU when its released today is Bet on Soldier.  More are coming soon, with a City of Villains patch due in April and Ghost Recon coming out in May. 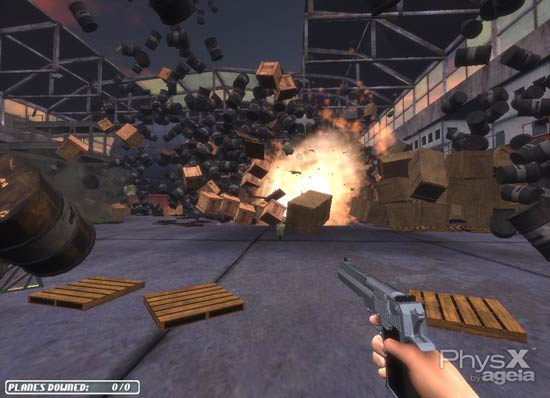 This demo is one we have seen before, but the video shows both with and without PPU versions of the scene with frame rate differences that are pretty dramatic, of course. 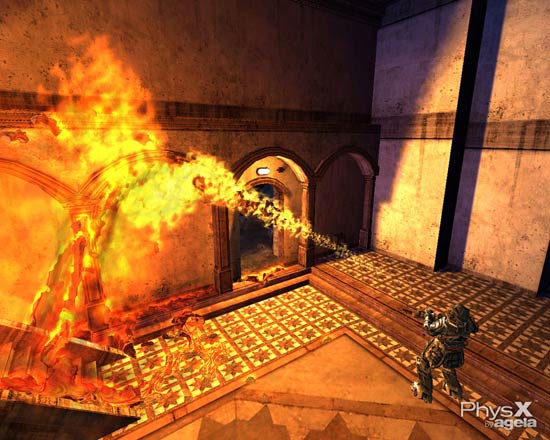 This game is actually available for sale now, and if you buy one of the systems with a PhysX PPU in it starting today, you can see some benefits of this technology right away.  The video shows the new weapon that is added to the game with the AGEIA patch; a plasma/flame thrower of some kind.  The weapon uses fluid dynamics that are run in real time on the PPU and I was told that this kind of physics is something that could simply not be done on just the processor. 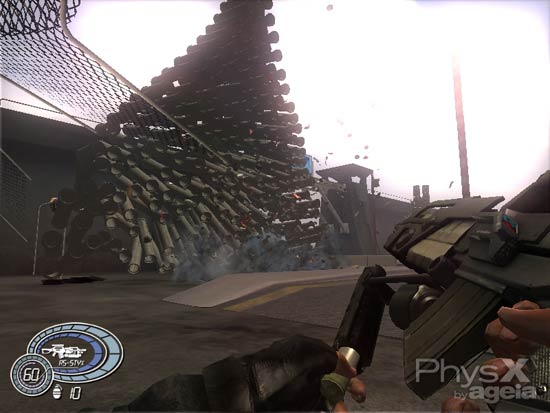 By far the most impressive of the demos, this game is pretty far out in development, but the physics work in it is very impressive.  This first person shooter has a fully interactive world that of course has some unique weapons to demonstrate the power of a separate physics processor.  Every interaction you see with the environment is being done in real time on the PhysX PPU and I played the game a bit myself during the demonstration period and it is a lot of fun.  The idea that users won’t be able to hide behind a pile of crates since you can blow the crates up is just one example of what makes me so interested in this kind of technology.  This is a title that will require a PPU to function, as is pretty obvious once you watch the demo.

So, besides just looking at the technology and demos, we were also shown the first working system with an AGEIA PhysX PPU in it from Alienware.  Starting on the 22nd, these systems will be available for sale, with a standard build time of 7 days according to on-site reps at the AGEIA meeting.  And while it is true that there is only one game that can even utilize the PPU currently if you brought one home next week, the idea is that you will now have a future proofed gaming system for the foreseeable games down the line. 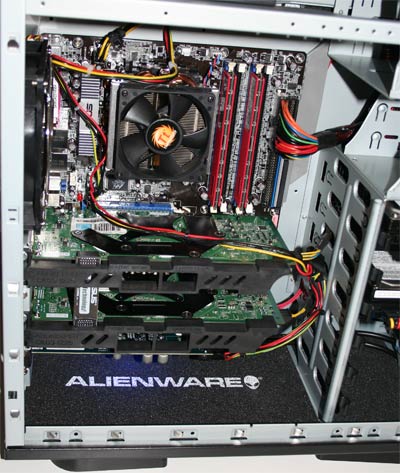 Inside the Alienware with the PhysX card at the bottom

Other system builders are set to announce availability as well today, so keep your ears open.

If you were wondering about retail card availability, don’t hold your breath quite yet.  BFG Technologies has told us they aren’t going to have retail cards ready until probably May, but only because the software isn’t there to drive demand for the cards.  However, a very prominent title (hint hint) will be hitting shelves in early May that might increase the interest for these PPUs quite a bit. 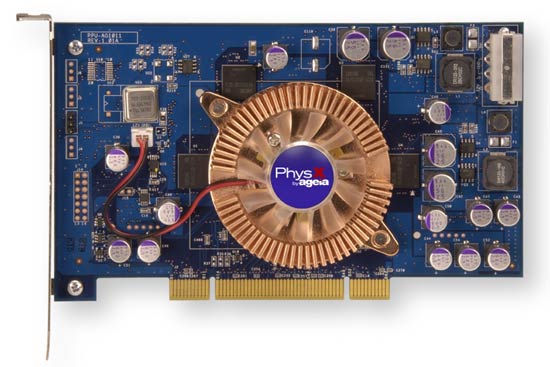 I won’t bother getting into the pricing argument that always comes up when talking about AGEIA’s PPU: are you going to shell out $250 for a separate, add-in physics card?  The answer more than likely rests in the software and game developer’s hands.

Thought I was expecting to hear more details from AGEIA’s staff about the technology inside the world’s for physics processing unit, the information we did get out of them was helpful in understanding the benefits of their technology over other physics offerings.  I will be eager to see what NVIDIA’s and Havok’s response will be to these claims, but it is obvious that their partnership is well behind AGEIA’s in the development stage with software and hardware.

While Bet on Soldier wasn’t as wildly exciting as we would have hoped the first PhysX PPU supported game would be, demos like Cell Factor are keeping hopes alive.  And the word on the street is we’ll see some more action during GDC starting tomorrow.  Stay tuned and check PC Perspective often!