Introduction to the Radeon XPress 3200

ATI is announcing the new Radeon XPress 3200 chipset today and we have all the details including 40 lanes of PCI Express on the north bridge and extreme overclocking potentional.

When ATI’s first iteration of CrossFire was released, there were many in the industry that called both the video cards and motherboards supporting it a hack job, which really wasn’t far from the truth. However some credit has to be given to ATI for making a response to NVIDIA’s SLI attack at all, albeit with some modest success.  The initial release of the Radeon XPress 200 chipset showed that the chipset had several issues and inefficiencies that kept it from running completely on par with the NVIDIA nForce chipset.  Because of these shortcomings, ATI’s chipsets never gained any foothold in the enthusiast crowd as CrossFire wasn’t attractive enough for users to overlook the spastic behavior of the XPress 200.

With the RD580, now officially dubbed the Radeon XPress 3200, ATI set out to build an enthusiast level north bridge with all the speed and power those kinds of users demand.  The XPress 3200 was designed from the ground up as a new product, only taking the successful ideas from the 200 chipset, not the logic itself.

And there has never been a better time for ATI to make such a move.  With their X1900 series of GPUs currently holding the top performance crown and with plenty of stock in the channels going for almost bearable prices, the fruit of an enthusiast platform is ripe for the picking.  Any buyer looking to explore their options for CrossFire had previously been stuck with either the aging XPress 200 chipset or the Intel 975X chipset which meant being pushed onto an Intel platform.  The XPress 3200 looks to keep such users in ATI’s camp as well as offering a top performing platform, at last.

Our Chipset Preview and A8R32-MVP Review

Since ATI is doing a hard launch with their chipset and the Asus A8R32-MVP motherboard, it just made sense to combine the technology preview and the motherboard review into a single article.  You’ll find all the technical details on the chipset here in the first two pages of the article and starting on page three you’ll find our new motherboard review program hard at work.  Enjoy!

ATI’s new XPress 3200 chipset is essentially a new northbridge and not much else.  There is no associated south bridge with the product or the launch and we won’t be seeing an upgrade from the SB450 option that has been plagued with issues until the SB600’s release in a few months.  ATI has already stated that they are holding back on that until the AM2 platform releases in the summer.

So what does a northbridge chip have to offer us on the AMD platform where the memory controller is located on the processor die?  The answer turns out to be PCI Express, and quite a bit of it.  The XPress 3200 features a full 40 lanes of PCI Express broken down into seven PCIe controllers.  The bulk of the PCIe lanes end up with the graphics cards as each of the two support x16 slots and gets a full x16 lanes of bandwidth, twice as much as the XPress 200 CrossFire.

Four of the remaining eight PCIe lanes are used to connect the XPress 3200 north bridge to a south bridge, whether it be an ATI SB450 or the more popular ULi M1575.  Finally there are four more lanes for four more controllers, allowing the board designers to choose between a single x4 PCIe slot or several x1 PCIe connections and peripherals.

The only other feature that ATI is pushing with the XPress 3200 is an innate ability for overclocking to extremely high speeds.  Since it was built from the ground up with overclocking in mind, they built quite a lot of headroom for those looking to push their systems past the limits.

That pretty much rounds up the features of the chipset; short and sweet.

Even more impressive might be that ATI was able to do this with the smallest northbridge die in the market at only 39mm^2 and with only 22 million transistors in total.  As you can see from the shot above, the die itself is miniscule compared to anything else we have tested.  Did I mention that the chip also has a max thermal dissipation of only 8 watts!  This definitely opens the door for a lot of small form factor and mobile applications for this chipset design. 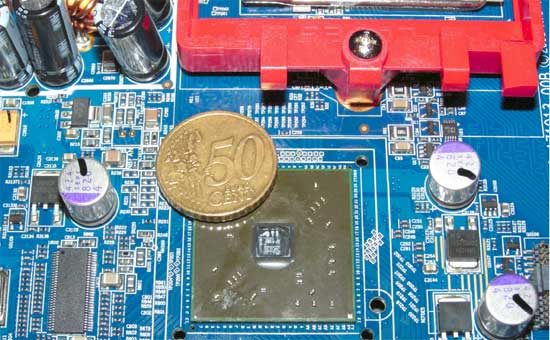