The Asus A8R32-MVP – Layout and Features

Let’s take a look at the layout and features that Asus has included on the new A8R32-MVP motherboard to see if the board can live up to the name that ATI’s chipset has created for it. 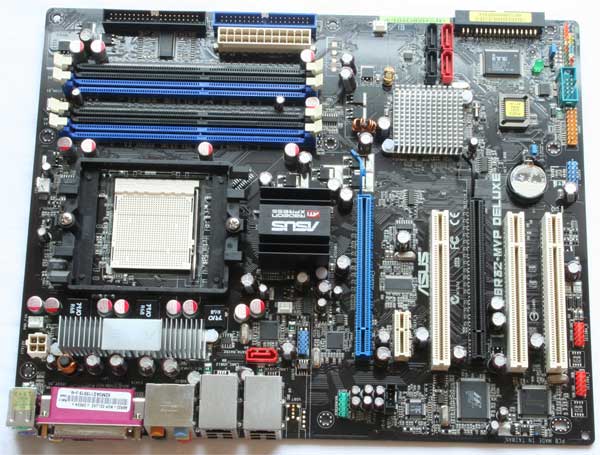 The first thing we noticed when compared to the original A8R-MVP motherboard is the removal of the plain-Jane brown PCB color with a new black PCB with black and blue connectors.  In reality the color doesn’t matter in terms of stability, performance or features, but enthusiasts are a testy bunch! 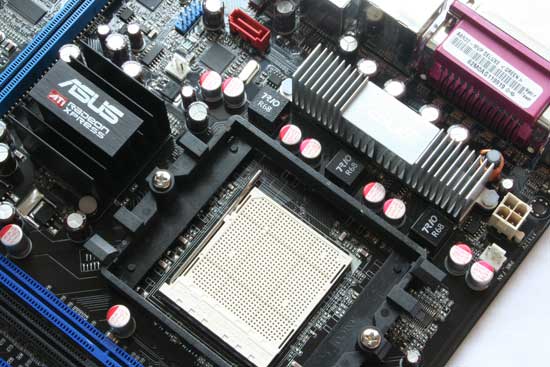 The CPU socket on the board is just like every other 939-pin motherboard we have seen in the last year or so.  It is located towards the top of the motherboard at a right angle where the heatsink retention clip will be going vertical.  This makes some water cooling setups easier as well as the tubing isn’t directed at either the DIMMs or MOSFET coolers.  The surrounding capacitors are kept at a low enough level to not interfere with the heatsink installations in our testing. 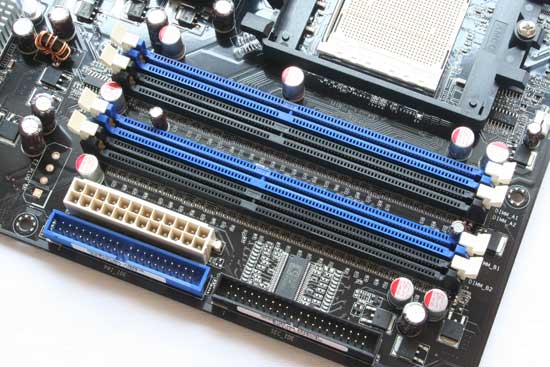 The four DIMM slots on the board are color coded for easy memory installation.  Users with the standard two matching modules will install them in the two blue slots; if you have more than that start with the black slot closest to the processor.  The DIMM slots were spaced far enough apart that installing even our Corsair PRO modules (with the wider heat spreaders) didn’t cause any bowing issues (where the modules bow out for being to close together at the base).

You can also see the main 24-pin ATX power connector in this shot, located just between the primary IDE connection and the left most DIMM slot.  The power connector has a lip the entire length of the connector allowing users with older 20-pin power supplies the ability to lock the connection in.  If you have a fourth DIMM module installed you will have a tight fitting getting your finger between it and the power supply connector if you need to remove it.  In our CPU socket image (the second image on this page) you can see the 4-pin power supply connection just behind the MOSFET heatsink.  Oddly, Asus has the clip pointing towards the fan’s power connector, and you may have to disconnect the fan cable in order to uninstall the power cable. 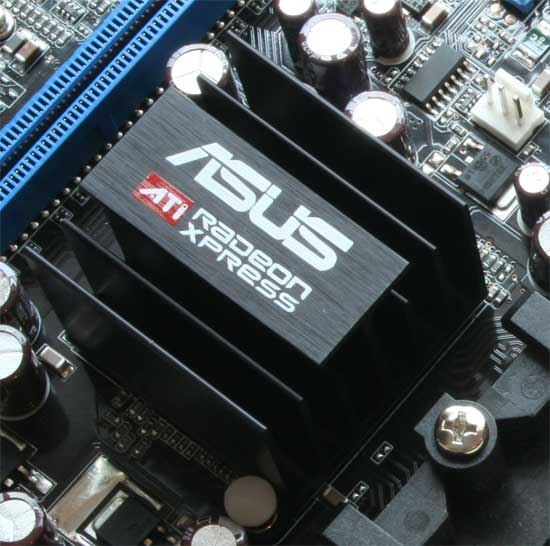 The heatsink on the north bridge on the A8R32-MVP is very small and only has passive cooling.  With a TDP of only 8 watts, the Radeon XPRess 3200 chipset will still be able to run very cool and still overclock well even this modest heatsink.  The only issue I see with this heatsink is that it is very loosely attached to the motherboard and wobbles a bit. 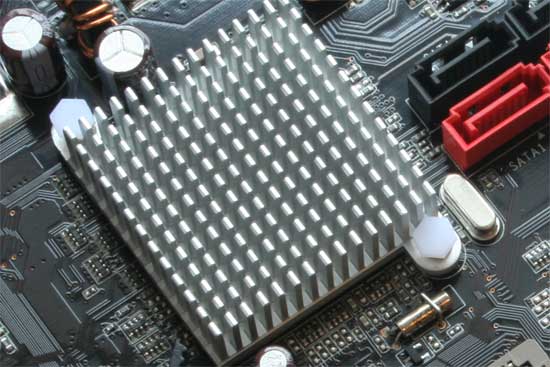 The ULi M1575 south bridge chip is also covered by a passive cooler and it is attached much tighter for a stable chip connection.  Ironically, on this board, it seems the south bridge is actually getting hotter than the northbridge! 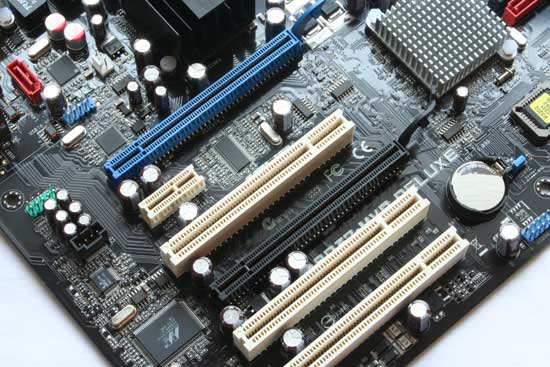 The expansion configuration on the A8R32-MVP has two full x16 PCI Express connections for CrossFire support as well as a single PCIe x4 connection for another peripheral.  Legacy PCI slots are represented with a total of three slots.  The x16 PCIe graphics slots have a rear-facing retention clip that makes taking the card out of the motherboard much easier since you won’t have to fight with the heatsinks on the video cards.  If you are going to be using a double-wide video card then your only other PCIe slot is going to be the remaining x16 connection as the 4x slot will be blocked.  If you choose to not go for CrossFire, you can of course still use the remaining 16x slot for any size PCIe device.  Want two PCIe graphics cards in your system?  Then you get MAYBE two PCI slots, but we’ll show you more on that in our installation page. 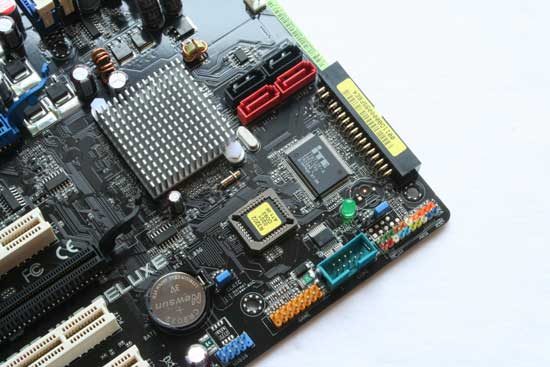 The bottom of the motherboard is relegated to the south bridge and most of the storage connections.  Here we see the four SATA connections that the ULi M1575 south bridge provides, supporting RAID 0, 1 and 0+1. The floppy connector is here as well, at a 90 degree angle with the PCB making installation a bit more difficult in some cases but out of the way once its on there.

The front panel connectors at the very bottom-right hand side of the board are clearly marked as to their purpose and even the positive pins are marked with a white ‘+’ through them.  The BIOS clear jumper is just to the left and is usually convenient to get to even if you have two GPUs installed, though a longer PCI card on either of the bottom slots will make it much harder.

The dongle connections come in the form of two more USB slots at the bottom of the PCB (blue connector) and one above the main PEG slot next to the northbridge heatsink.  There are also two FireWire dongle connections below the last PCI slot on the board in red. 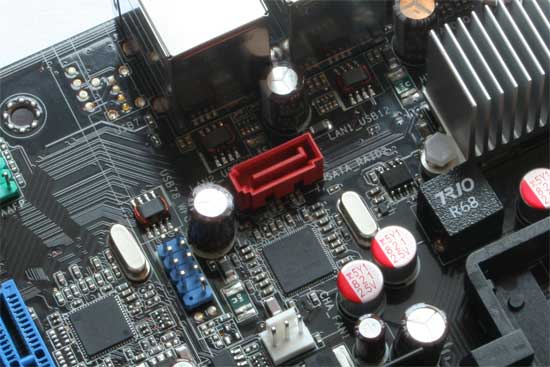 This Serial ATA connection pictured above is courtesy of the Silicon Image 3132 chip sitting next to it, and is used for external SATA connections. 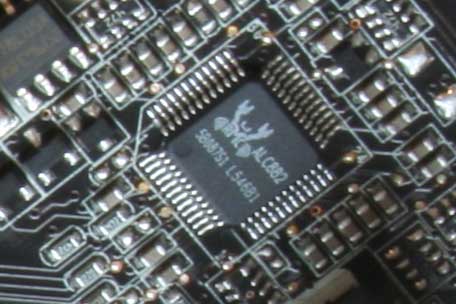 This Realtek ALC882 codec chip powers the Azalia compatible HD audio on the A8R32-MVP.  CPU Utilization and audio quality were pretty good as you will see in our benchmarks pages. 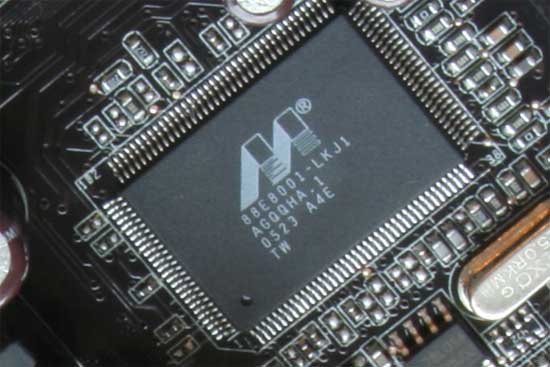 Asus decided to include two Gigabit Ethernet ports on the A8R32-MVP Deluxe; one powered by the Marvell 88E8001 PCI network interface and the other by the Marvell 88E8053 PCI Express network interface.  While the ULi M1575 doesn’t have Gigabit Ethernet integrated like the nForce4 MCP, Asus included the next best thing with two external chip connections.