GDC 2006 was full of even more discussion about gaming physics and we have some videos of the demonstrations from both ATI and NVIDIA. Read this summary of the show for all latest information.

The Game Developers Conference (GDC) differs from other shows that you might have heard of in that nearly all of the attendees are active gaming industry personnel.  There is still a good amount of sales and marketing in full force at GDC, but without giving the public access, the show floor is easier to navigate and the industry insiders are more willing to discuss their technologies.  This was my first trip out to San Jose for GDC and I found the expo to be fairly informative even in a time when it seems like I have seen everything before.

We stopped by booths and showcases from AGEIA, Havok, NVIDIA, ATI and Intel to see what we could find out about the future of the gaming world that we are all so entrenched with in the enthusiast community.

There was no shortage of news and announcements from AGEIA during the last week or so as our email in box can no doubt vouch for.  As both a software and hardware company, AGEIA has been hard at work giving away their PhysX API in hopes of building a large software base with which to market and sell their hardware PPU.

These software announcements have varying implications depending on the amount of integration that each game developer plans for their title.  Using just the software API, but not integrating the hardware hooks to improve physics performance won’t sell physics cards.  Games such as Unreal Tournament 2007, Rise of Nations, Vanguard and Ghost Recon round up the announcements made this week at GDC.

The AGIEA PhysX API has been integrated into many engine tools and platform tools as well that will open up the hardware for further opportunities.  First and most importantly, the Unreal Engine 3 uses and supports PhysX API and so will all games that license the engine.  Also noteworthy, the Playstation 3 developing kit integrates both Havok and PhysX APIs so game developers will decide which is the better option.

Along with these software announcements, there were some hardware based announcements as well including initial availability of the hardware cards through high end system builders.  The first to offer systems with the cards will be Alienware, Falcon Northwest and Dell.  The idea here is that these systems will offer buyers as future-proof a platform as possible as the titles to show off the PPU aren’t ready quite yet.

If you are looking for a retail card with a PPU on it, you’ll have to wait until May as both AGEIA and their retail partner BFG Technologies have admitted.  The reason for that delay is to match the hardware release with that of the first major software title, Ghost Recon.  If you haven’t seen the sample video from this PC title, you should head over to AGEIA’s micro-site and take a look. 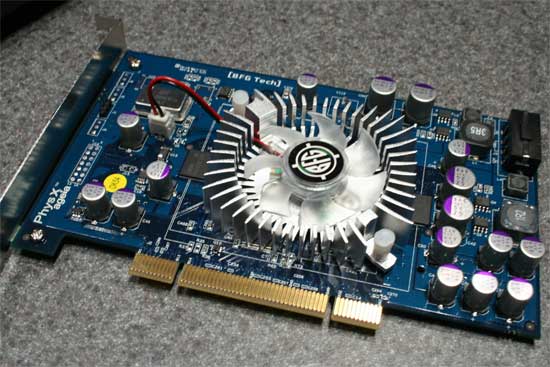 If you are looking for some more technical background on the AGEIA physics processor including a high-level look at their architecture and other key development points, I just recently posted an article that will answer a lot of your questions on the subject.  Please give it a read when you have a chance.

Next Page – NVIDIA and Havok FX