The big feature of the GA-G1975X is the enthusiast focus – nearly every square inch of this motherboard has a special feature that is designed to deliver geek rapture. All those little extras really makes it stand out from the crowd, so let’s go over it all. 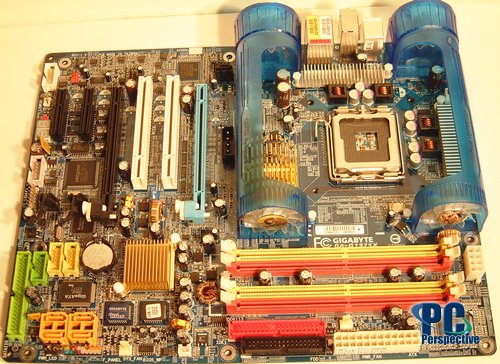 The most obvious enthusiast feature is the “Turbojet” fan and heatsinks that frame the socket area. The Turbojet consists of four 40mm fans ducted from front to the rear I/O helping exhaust heat from the North Bridge, MOSFETs, and the socket. Each fan pair shares an onboard 2-pin fan connector, so if you want to run just one of the two fans in a given pair, you will have to do some rewiring. 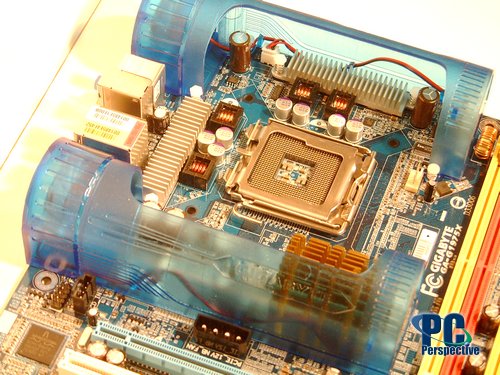 The TurboJet cooling scheme looks good, but takes up too much
real estate on the back I/O and cramps the board.

When turned on, the four 40mm fans are loud but not annoying like 60mm Delta fans. Users who like it quiet should definitely disconnect some or all of the TurboJet fans as the blowing sound may get on your nerves. For what it’s worth, you can not control the RPM of these fans… it’s all or nothing.

Along with the TurboJet, there is ample use of heatsinks on the motherboard for the MOSFETs, South Bridge, and North Bridge.

In case you mess up your BIOS, there is a 2nd BIOS onboard so that you can be back up and running without having to send your motherboard for service. 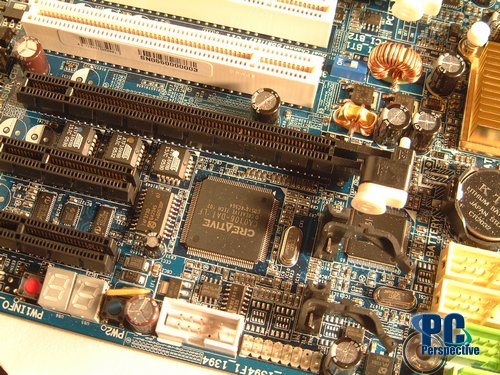 What may be the most handy feature for overclockers … a jumperless BIOS reset switch! The switch is a god-send for those of you with less-than-nimble fingers since you can now use a pen or screwdriver to reset the BIOS. It’s about time someone did this!

You want better stability while overclocking? You got it! The GA-G1975X has a 8-pin 12V power connection, a 4-pin molex for your PCI-Express video card, and a 24-pin ATX. Of course, your older 4-pin 12V and 20-pin ATX will work fine.

While the Intel 975X chipset only comes with a single ATA133 channel, Gigabyte has added one of their own so you can have a total of 4 PATA drives. There are four SATA 300GB/s connections using the Intel ICH7R which supports RAID 0, 1, 5, and 10. For those of you looking for SATA-II, you will have to wait for a new chipset from Intel as the ICH7R does not have it.

Most other motherboards place a single slot (PCI or PCI-E) to seperate the x16 slots. Thanks to the two PCI slots between the x16, larger video coolers are not crammed up against each other. The disadvantage to this is that your PCI devices (like sound cards) will be sandwiched your graphics cards which can get pretty hot. 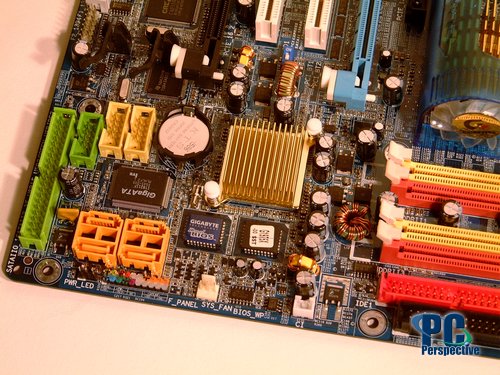 The retention mechanism on the 16x slots uses a pin-latch style which I find a bit easier to use because you don’t have to dig your finger underneath the video card to press a lever.

The 4x slots have retention clips to help keep your PCI-E cards in place; this is something not many motherboards have.

The GA-G1975X is unique in going with the Creative SoundBlaster Live! integrated audio. As far as software-based audio is concerned, the CA0106-DAT chip is a step above traditional AC’97 codecs and is the same one that is used on Creative Labs Audigy LS sound cards. The included bracket offers 7.1 analog audio, and SPDIF output via optical and coaxial cables. We will review the performance of the audio later in this article.

Because of the TurboJet cooling system, the back I/O of the GA-G1975X is minimal: legacy keyboard and mouse PS/2 ports, 3 audio jacks, 2 USB 2.0 and your gigabit LAN (on a Broadcom BCM5789KFB chip). The rest of the ports are located on break-out brackets included in the box.

To round out all the features are a series of small touches like six fan headers (one 4-pin PWM, two 3-pin molex, two 2-pin used by TurboJet, and one 2-pin), onboard power and reset switches, reusable ATX pin covers (for the 20-24pin ATX and 4-8pin 12V), and a debug LED.