Most people only install a motherboard once, so some minor inconveniences are tolerable. So ignoring these small details, how do we judge a good motherboard design? The test is to install the motherboard into my trusty old full-size Antec SX840 ATX case. In addition to the motherboard, the following components were also installed.

Putting the GA-G1975X into an Antec SX840 case (the same style chassis as many Chieftec cases) started as an easy task.

However once you start to install brackets the case gets cramped quickly. I had a power cable draped over my video cards to power the SATA bracket, and a USB cable wrapped around the front edge of the same video cards. Having two graphics cards installed definitely limits your options for a neat and tidy layout. The two 6600GT cards are smaller than 6800GTs or 7800GTs, so good luck to those of you with bigger cards! 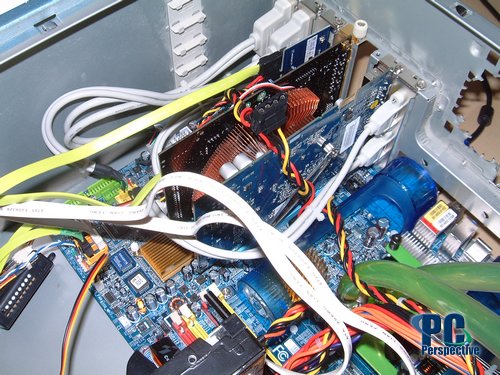 Not very pretty, but everything is installed except a USB bracket.
A PCI card can go between the two video cards – it’s a really tight fit! 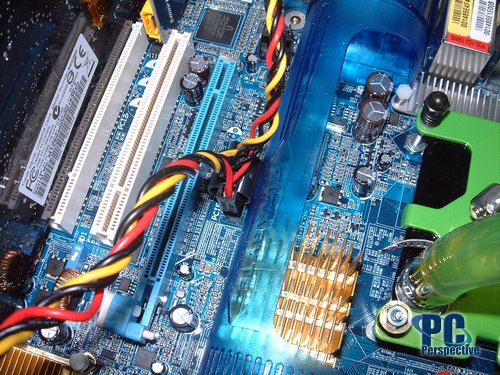 The PEG power was hard to remove due to the TurboJet duct.

With two graphics cards installed, I found that I had to compromise on the functionality of the GA-G1975X. The free slot between the two 6600GT video cards was not large enough to install any of the I/O brackets including the USB and SATA ports. This meant that I only had 3 more usable expansion slots. So with five brackets and three usable slots, which feature of the GA-G1975X was going to get the axe? Was it the onboard audio? Can I live with just 4 USB ports instead of 6? If I leave the SATA bracket out, what should I do if I decide on using it in the future? 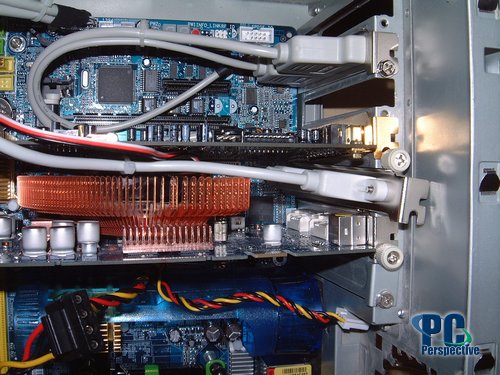 The USB bracket won’t fit when a double-slot video cooler is installed.

I find it Some other installation notes: 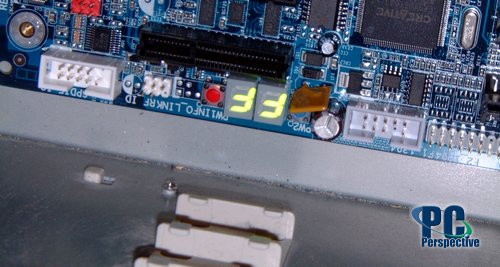 CMOS and Power switches are hard to access once installed.
“PW2” is obstructed by passive components.

All in all, the layout of the GA-G1975X is difficult to work with and with much of the blame can be pegged on the TurboJet cooling fans. By taking up a valuable space on the backpanel I/O for the fans, Gigabyte puts the user into a mess of I/O brackets, cables, and installation issues. I find it disappointing that Gigabyte’s board design forces the user into cutting back on features if the user decides to install their own expansion cards (i.e. RAID, audio, etc.).