Our first benchmark tested was the retail version of FEAR, one our more popular gaming tests for both the GPU and CPU performance.  Intel’s configuration of the game was setup to put as much emphasis on the processor as possible.  The resolution was set at 640×480, the CPU settings were put at the maximum and the GPU settings were set at the minimum.  The resulting image on the screen wasn’t much fun to look at, but I also ran the test at the same settings that I use in our testing as well.  With a 1280×960 resolution, CPU settings and maximum and GPU settings near their maximum, with just soft shadows turned off.

At the 640×80 resolution, the frame rates are exceptionally high, and the Intel Conroe processor has a big lead.  The minimum frame rate on the Conroe is 44% higher than the overclocked AMD FX-60.  The average frame rate is 55% higher as well, even more impressively.

At the more reasonable resolution, that gamers might actually play at, the minimum frame rate is 23% faster and the average frame rate is 11% faster in the favor of Conroe once again.  These are much more modest performance gains, but are still very impressive as we have never seen a simple processor change result in this much of a performance gain in an application that normally is a beast on current systems.

The second gaming test I ran was the HDR capable Lost Coast technology demo that Valve created last year.  We used a timedemo that Intel provided on the system that walked through several indoor and outdoor areas and ended wit the final helicopter fight on the balcony.  The Intel provided test configuration was run at 1024×768, with HDR turned off, reflect set to none and filtering set at bilinear.  Again this was intended to push the gaming performance onto the processor and as much as possible off of the GPUs.  My own personal settings ran at 1280×960 with HDR enabled, reflect set to all and filtering set to trilinear. 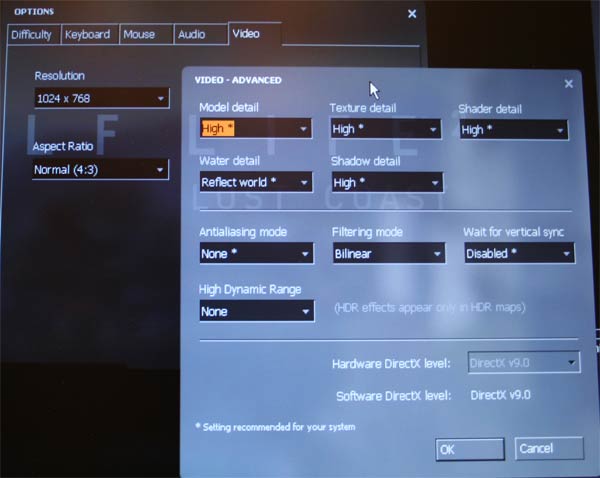 At the lower image quality settings the Conroe again has a performance advantage of about 19% on Intel’s settings and a somewhat smaller 18% lead in the 1280×960 resolution.  Both of these results are simply outstanding and if they hold true for when Conroe is released AMD is going to have a big problem on their hands.