In our stress testing results we ran the same 3DMark06 configuration with the Gigabit network, SATA and Firewire connection being maxed out in the background.  This will obviously affect CPU performance at the least and thus will change our 3DMark06 final score, but with a break down of each of the 3DMark06 results well see if any changes occur in the GPU side of testing as well. 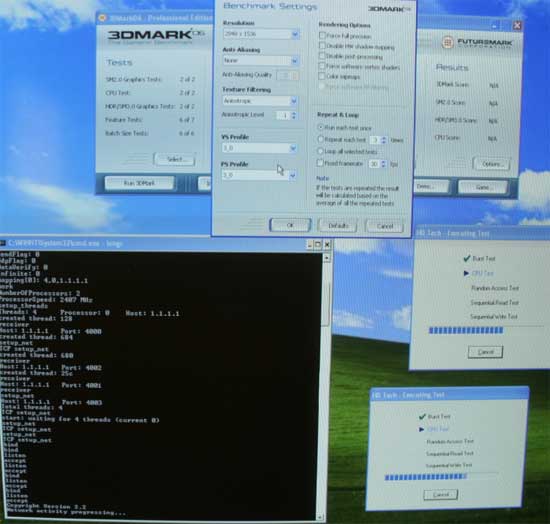 Again, our testing first included testing both slots with a full 5x HT multiplier and a 16-bit wide bus with the below BIOS settings for verification.

Our overall 3DMark06 scores are about 400 or so points lower than our initial run, but we expected that with so much additional CPU processing going on in the background.  Our results show that as we decrease the bus width and link multiplier between the north and south bridges, we again do not see any noteworthy negative performance changes.  The benchmark results remain just as static during the bandwidth changes as they did before, only this time we are pumping a lot more information through the NB to SB link.

The performance delta on the overall 3DMar06 score is about 8.8% compared to the first run of tests without the background applications.  The individual gaming tests have a 2.8% average change compared to the previous runs while the CPU tests differ by up to 44% so we can obviously tell where the majority of the overall 3DMark06 score delta is attributed.

What kind of conclusions can we draw from my own testing data here?  First, everyone needs to realize that you should never take any company on their word about performance, features, etc as you are likely to get burned eventually.  This holds especially true when one company is quoting numbers about their competition.  We don’t take the benchmarks that NVIDIA provides us with and regurgitate them here on PC Perspective and we don’t for ATI or any other company either.  We will sometimes present them to you all, but always with the disclaimer on them.  The fact is that facts can be twisted into pretty much anything someone wants with enough time and effort.  To quote from one of my favorite movies, ‘it was true, from a certain point of view.’  How distorted that view is though varies from case to case.

Back to the technology aspect of it all, we can see that ATI’s claims of bandwidth levels on the NF4 SLI X16 chipset are simply not valid.  Our real world testing shown here obviously demonstrates that even with ATI’s cards involved to eliminate chipset/GPU tweaks, the secondary x16 PCIe slot has no noticeable performance deficit compared to the primary x16 PCIe slot.

Even more indicative of invalidity of ATI’s data is the fact that even when we desperately TRIED to make the NF4 X16 secondary GPU slot slower by bogging down the system with almost a full Gigabit of networking data, a maxed out SATA connection and a maxed out USB/Firewire connection, it didn’t work.  The secondary GPU slot performed nearly the same as the primary slot with only very small performance differences under 3%.

The truth of the matter is that both the NVIDIA NF4 SLI X16 chipset and the ATI XPress 3200 chipset provided enough bandwidth for today’s SLI and CrossFire generations, at the least.  ATI’s attempt to promote their RD580 chipset by showing poor performance numbers on inter-GPU communications didn’t add up in our testing.

Now get to our review sections and read real reviews with real tests about the hardware and its performance.

Be sure to use our price checking engine to find the best prices on the NVIDIA 7900 GTX, and anything else you may want to buy!