The front door and bezel of the Eclipse DV are plastic with a brushed finish on the outside of the door and an extremely high gloss finish on the bezel, just look at the reflection! 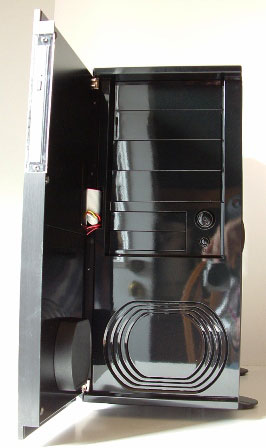 At the top of the open door you can see the DVD combo drive which also explains the thickness of the door. At mid-case you can just about make out the drives ribbon cable, it is also the area where the rest of the wiring for the drive and LED’s used to give the beautiful blue effect when the system is fully operational.

In the lower part of the door is a volume indicator with the inner circle lit up to signify your volume setting. As far as this writer is concerned, its pure gimmick with little or no real value as it connects to your sound card with a jumper going from an expansion plate to a sound card or on-board sound, now if it recorded the overall volume level of your system (noise generated by interior motors and fans), then it would have value. 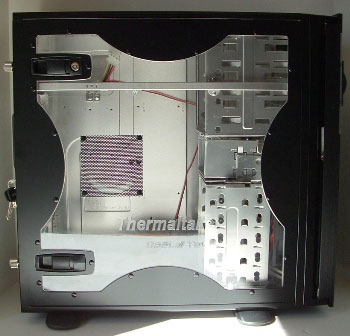 This version of the Eclipse DV is the windowed model with an 80 mm fan serving as additional air intake and it’s really needed as the front 120 mm fan intakes very little air due to poor intake outlets as can be seen in two photos above with the door opened. The top latch contains a lock that allows the user to lock the side panel, but this is not the only security offered by the Eclipse DV.

In addition to having the external front access ports on the side (right panel) ThermalTake in their wisdom has included a lock so that you can limit access to your goodies through the front bezel.

Two different locks are used requiring two separate keys which are supplied by ThermalTake; both sets of keys are attached to the rear panel as we’ll see later.

Our next to last exterior photo is of the rear panel, with nothing out of the ordinary to be seen, other than the 120 mm rear fan placement and the two sets of keys hanging there.

I have no idea why ThermalTake placed the keys here rather than the box of parts included with the case, all I can think of, is that they use many different sets of locks and this is the best way to make sure that the right keys are shipped with each case. But, who knows?? 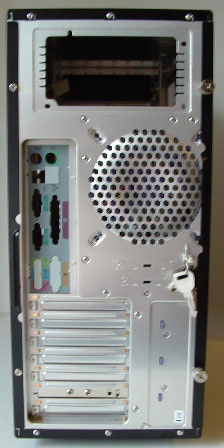 Before moving on it is important that we look at the retractable feet that ThermalTake outfitted the Eclipse DV with, because they are important. We found when the feet were retracted under the case (where you can’t see them) we had occasion to knock the case over once or twice, but not when the feet were extended like in the photo below. We strongly suggest you always have the feet extended to help protect your investment. 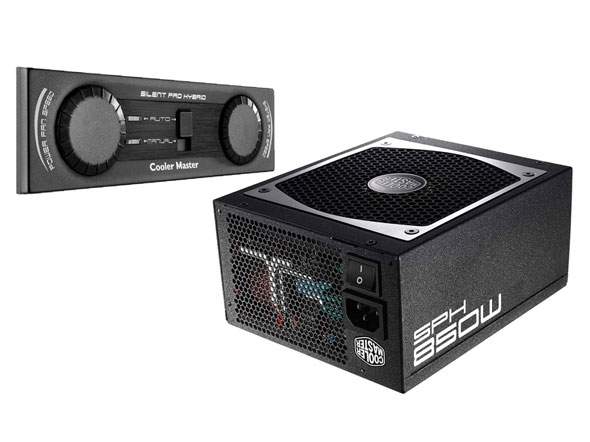