We will now test the hard drive performance of the Asus W5F which uses a Fujitsu MHV21000AH 100GB 5400RPM drive. To compare, we are also testing the Fujitsu 4200 RPM drive in the Compaq V2410. This will give you a good sense of what you will gain by paying a little extra for a faster performing HDD. 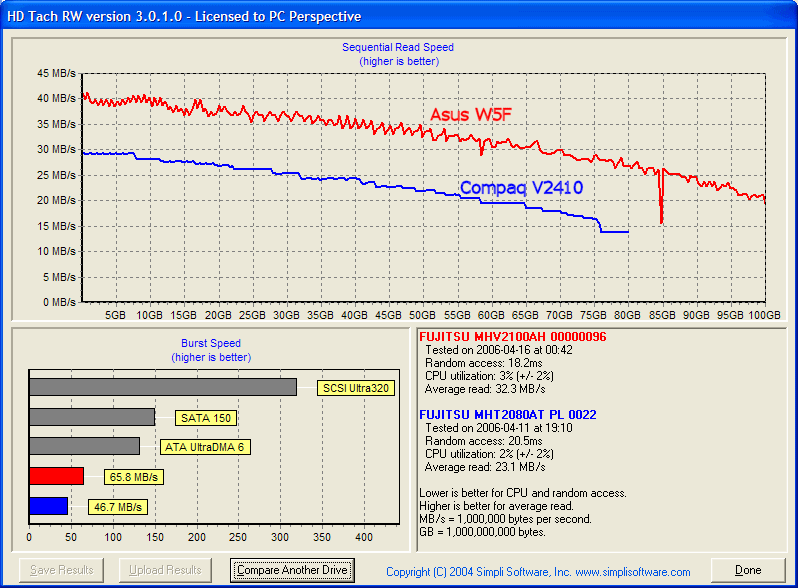 There really isn’t any comparison between these two hard drives in the two laptops we are comparing – the faster RPM Fujitsu HDD in the Asus W5F gives better performance all around with an extra 20 MB/s in burst reads, 10 MB/s in sequential reads, and 2ms quicker random access.

For many of us, the only way to add functionality not built into a laptop package is by using one of the expansion ports. With so many USB and Firewire devices on the market these days, tests like the one we are about to perform are even more critical. Using a Bytecc ME-740 U2F external ATA133 enclosure, we will test the performance of the USB and Firewire ports on the Asus W5F. 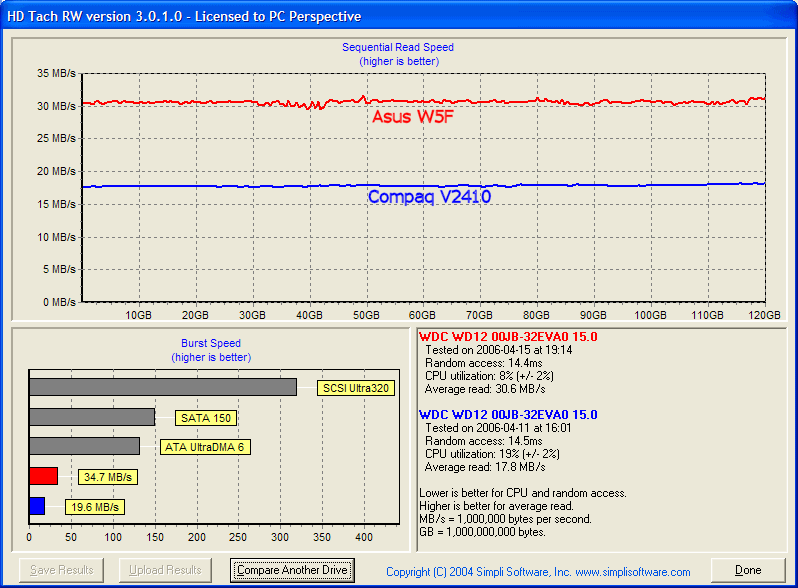 The result above really surprises me. Initially I was thinking that the Compaq V2410 was stuck in Full-speed USB 2.0 transfer mode (120 MB/s) instead of High-Speed mode (480 MB/s). But after some fruitless BIOS and driver updates, I finally figured out that ATI’s Xpress 200 chipset has extremely poor USB 2.0 performance thanks to the reports by many users and reviewers around the Internet.

At any rate, the USB 2.0 on the Asus W5F performs nearly on par with the nForce 4 SLI so you can feel comfortable knowing that the W5F is nearly as good as a desktop in USB ability. 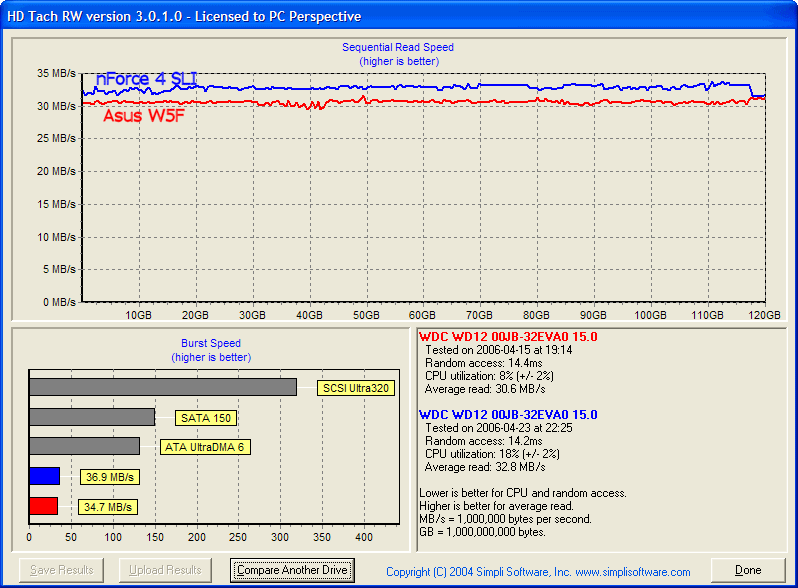 For most laptop users, the Firewire port goes relatively unusued. Most use it for an iPod or a hard drive, even less use it for a video camera. However, the few tests will show you that Firewire is great for long sustained transfers that beats USB 2.0. 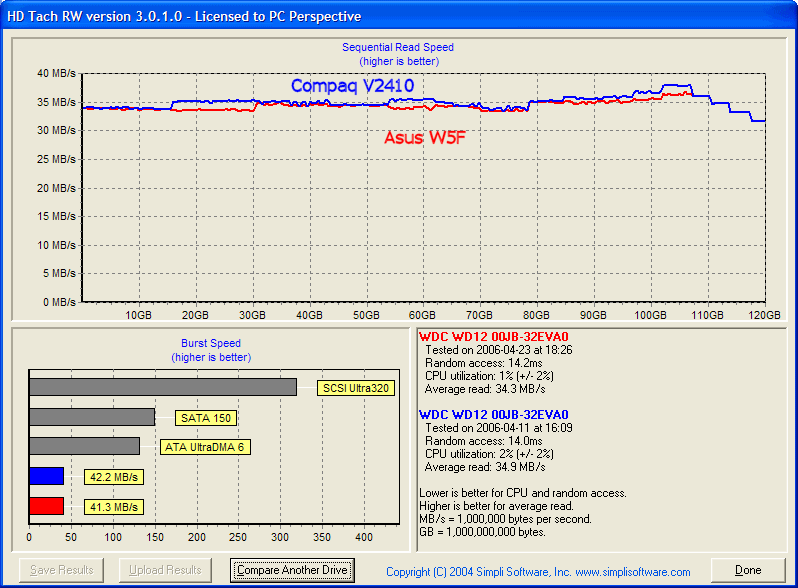 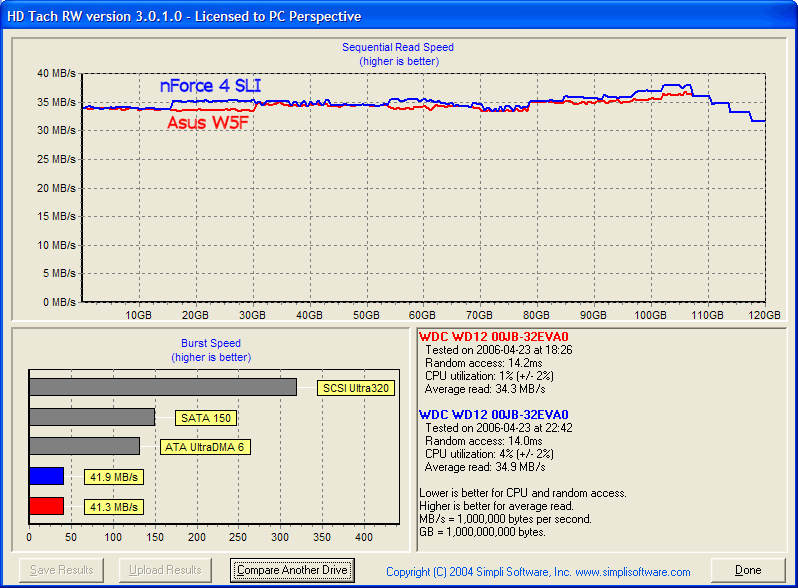 Nothing really too exceptional to report here. All three systems use Firewire well and we do not see any severe performance issues like the Compaq V2410 did with USB 2.0. 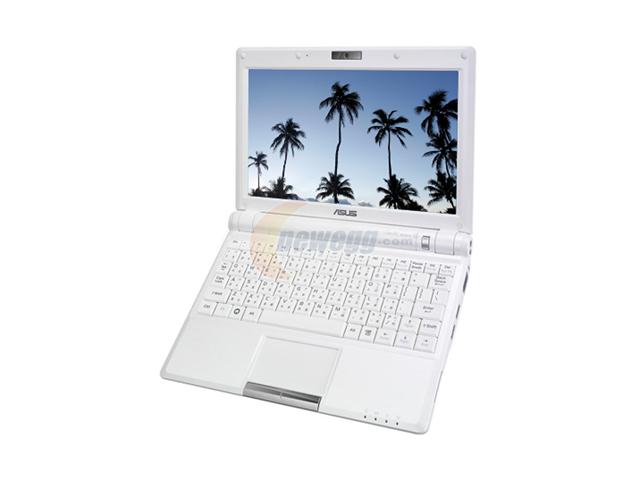