Ultra portable laptops with 12.1″ screens or smaller should be durable and well constructed, afterall what’s the purpose of a super portable computer if it’s too delicate to bring with you when you leave the office or your home?

The Asus W5F looks like a delicate laptop with its pearly white exterior and cool blue LEDs, but don’t like the nice looks deceive you! The build quality on the W5F is very solid and I could not identify any major aspect of the design that may become a future structural liability. The lid was very sturdy and easily opened without any undue flexing or straining of the body. The body doesn’t creak or bend when moved around either. Doing the one-handed pick-up test, the W5F was strong and didn’t feel like it was going to snap in half under its own weight. 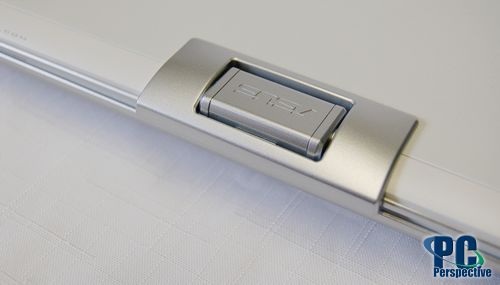 There is no latch holding the lid down.

Unlike other laptops the Asus W5F does not have a latch to hold the screen in a closed position, instead the laptop relies on the hinges to keep the screen in whatever position you choose, including having it closed completely.

The optical tray causes some concern as the tray is wobbly and feels very fragile when opened. Since a significant amount of force is required to properly place a CD onto the drive’s axle, you should probably be careful not to break the tray and support it on a hard surface like a desk or the arm of a chair. 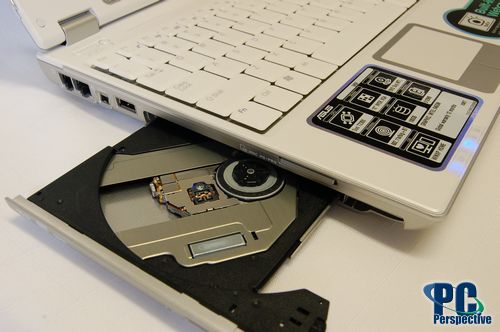 Another potential problem is the integrated web camera. Since you can swivel the camera 180 degrees, you may risk damaging if you rotate it the wrong way or if you transport the laptop with lens facing outwards. However all of this can be avoided by being careful and knowing how to operate the camera properly.

Even during moderate use, the W5F generates a good amount of heat and most of it localized along the right-hand side toward the rear of the laptop. The intake fan that cools the CPU and North Bridge is located on the bottom of the laptop so it’s important to not have it blocked especially when you’re using it on your lap (which the manual advises not to do).

The location of the exhaust fan on the W5F blows over your right hand if you are using a mouse making sweat an unfortunate issue. Nothing quite impresses a business client or friend like a nice sweaty handshake. I would have preferred the exhaust to have been somewhere else (like moved to the rear of the laptop) but the small body size makes such designs hard to implement.

To be more empirical in our examination of thermal properties of the W5F, we run two instances of SuperPi to sufficiently heat up the unit and then use a thermal probe to record the maximum temperature across different areas of the laptop. To measure the heat being exhausted from unit, the probe was placed inside the exhaust grill like this: 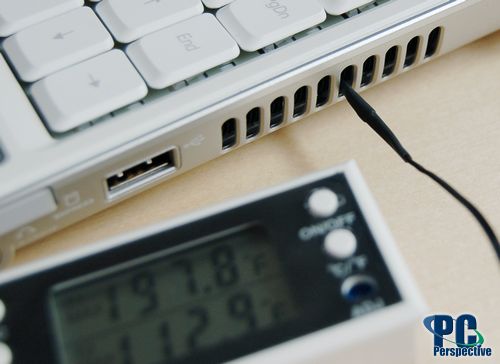 A CompuNurse Advance was used to read the temperature
of various parts of the laptop.

Here are the results compared to the Compaq Presario V2410 Turion ML-30 laptop we reviewed back in October.

Even though the heat generated from the CPU is very warm, Asus has managed to keep the body of the laptop reasonably cool. The right side of the laptop does get a bit warmer than the rest so if you perspire easily, best to find a surface to put the W5F instead of on your lap.

The two big heat generators on a laptop are the hard drive and CPU, and how well the laptop keeps these components cool is critical to the longevity of your computer. To test the laptop’s CPU cooling we load up the system with two instances of SuperPi and record the highest CPU temperature after 20 minutes. For HDD cooling, we perform a FULL HDTach test and record the hottest temperature after 20 minutes. All temperatures taken using internal sensors.

Cooling on the Asus W5F is significantly better than the Compaq V2410 in every respect. The hard drive idles at a lower temperature despite having a higher RPM than the 4200 RPM in the Compaq. Loaded HDD temperatures are very reasonable and close to temperatures you would see on a typical desktop HDD. The loaded hard drive temperature of 52 C on the V2410 is just plain scary.

CPU temperatures are fairly reasonable as well on the W5F with 55C loaded and 52C idle… just a 3C delta!

This Droid is Amazing!! 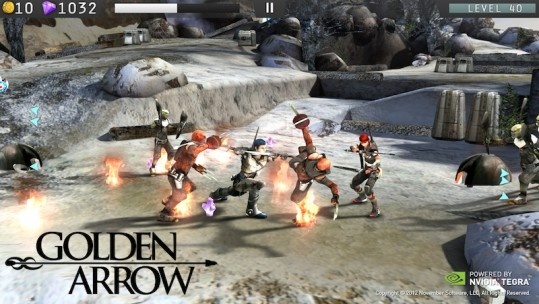