As is common place with modern GPU and video card designs, the physical layout of the PCB and the cooling solution on the cards are mostly determined by NVIDIA’s reference designs.  This allows the add-in card vendors to quickly replace the external markings on the card and get the product on store and e-tail shelves quickly.  Occasionally we do see some variations from the reference design, but those boards are later to market and will more often come from large scale vendors like Asus. 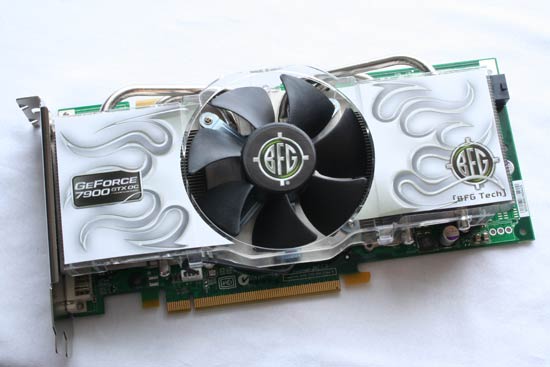 The BFG 7900 GTX OC seen here looks just like our reference sample did, but with a change in sticker configuration.  The card still features a dual-slot cooling solution and a single PCIe power connection on the back side of it for connetion to your PSU.  These heatsinks made their first debut on the 7800 GTX 512 MB cards and they are actually pretty decent in terms of both cooling power and noise levels.  The larger heatsink area has heat transferred to the fins via the heatpipes that run along the top of it to quickly disperse the heat these GPUs generate.  The large fan is able to move a lot of air without an incredibly faster spin rate so NVIDIA and BFG are able to keep the noise levels low.

These cards do get hot though — damn hot!  In our testing, I attached a thermal probe to one of the heatpipes using some electrical tape and found temperatures in the 65 degrees Celcius range were quite normal.  That is hot enough to really cause some pain when pushing my finger on it. 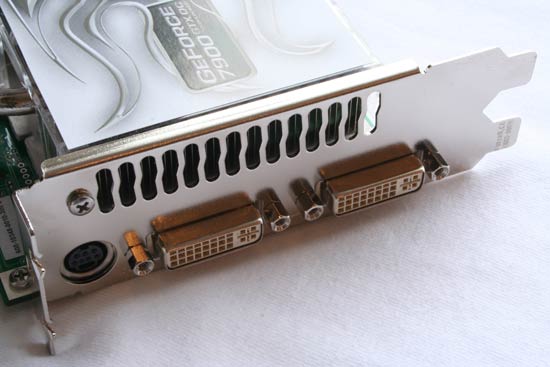 You can see the two slot cooling system here as well as the dual dual-link DVI connections that support all modern monitors even up to the 30″ Dell and Apple screens at 2560×1600 resolutions.

The other video output is for TV and HDTV output capabilities using the external dongles shown below.

All vendors try to add some value to their video card by including some things in the box that users will either want or need in their gaming or computing experience.  This task is pretty difficult though as AICs are always looking to get a lower price as well as better value for the customer. 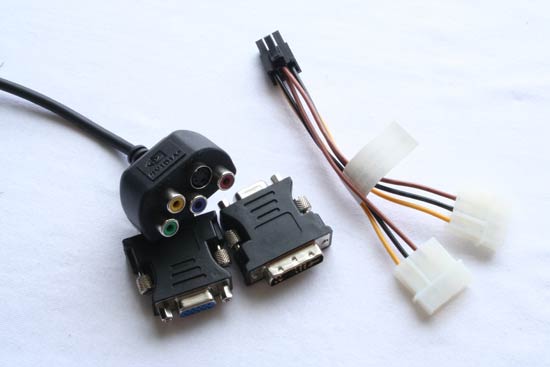 BFG has included two DVI to VGA adaptors for those using older monitors as well as a power adaptor for power supplies that don’t yet have the dedicated PCIe power connection.  It is recommended that you attach each of the Molex power connectors to a different line out of the PSU for the best power distribution across the system to the power hungry 7900 GTX. 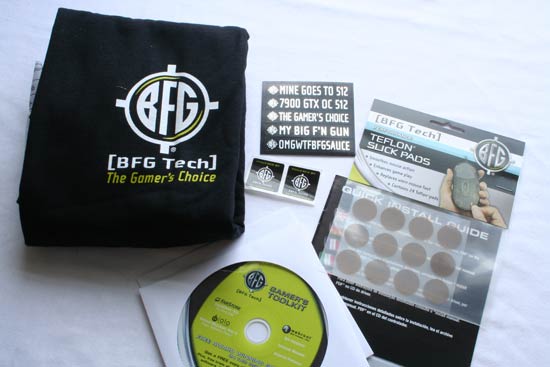 For your hard earned cash, BFG also has some fun extras in their 7900 GTX OC retail packaging.  First, you get a BFG T-Shirt that is actually of very high quality.  You also get some stickers for your case and some for your card, should you wish to enblazen it with “Mine goes to 512” or one of the other included labels.  The BFG teflon slick pads are for your mouse and attach to the feet of them to make mouse movement even easier than before on nearly any surface.