The pure beauty and elegant stature of the Stacker 830 is visible from every conceivable angle you may look at it from. In this section, we’ll attempt to show you as many functional external area’s as possible.

I know it’s a little strange to start with the top of the case, but the Stacker 830’s top is not like ordinary cases. 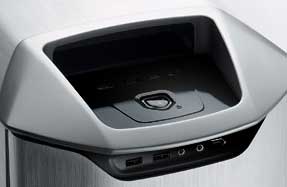 I know it’s difficult to see, but there are actually two sets of front access ports, the first being located just under the lip of the door and the other, just beyond the black power button in the recess. The recess itself, serves as the front handle with a similar one in the back, which we’ll see later.

Dead center in the middle of the top is a very large, black, wire-mesh covered exhaust cavity seen below. 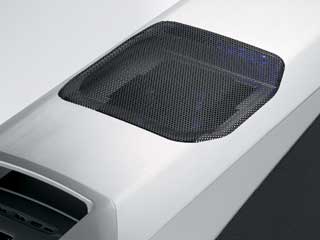 I believe you can see why I referred to it as a cavity; you can see aluminum frame work under the mesh which supports the bracket that can hold a 120 mm exhaust fan, if you so desire. In the lower left corner, just under the darker gray plastic is the indentation that serves as the rear handle, we’ll see this clearer when we show you the back of the case. 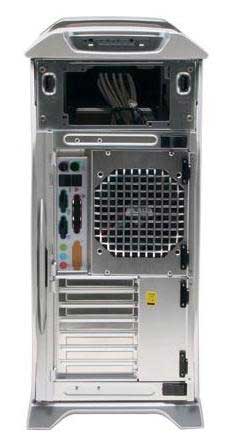 The back is pretty standard for ATX type cases, at least in this configuration, but Cooler Master supplies everything you’ll need to convert the case to any of the BTX layouts, that is, if BTX ever flies, but we’ll be using it strictly in ATX mode.

The big difference in the back  is two black latches for the left side panel and one for the right side panel,  that when opened allow you to remove the side panels and another one to slide-out the motherboard tray, the only screws used are to hold the power supply and its supporting face plate. 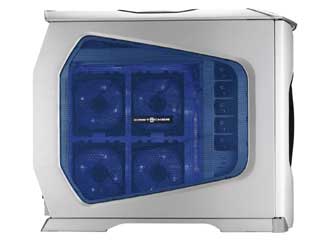 Both side panels, just as the top exhaust area and the front of the door, are covered by black metal mesh, in a rather interesting design I might add! This is an area we’ll be modifying, which you’ll see a little latter.

The photos above show the Stacker 830 with the door closed and with the door open. I know its hard to see due to the black mesh bezels, but believe me when I tell you that there are nine total bays, but you’ll see the breakdown in the specs which we showed earlier.

The door is something you’ll only see on Cooler Master Cases. The door can open from whichever side you want it too, that’s right, just remove the hinge pin and spring from the top and bottom, then place them in the channel on the opposite side, connect the door and that’s that (a more detailed description can be found in the owners manual).

If you were planning on building a Spider platform …