Our tests attempt to determine the following three overclocking limits: motherboard, memory, and ideal.
To figure out the maximum overclock for the motherboard, we drop memory timings, frequencies, and the CPU multiplier, and throttle up the system bus until it can no longer run our suite of tests (the same tests used throughout this article, takes about 2 hours).
For memory overclocking, we set the memory multiplier to a 1:1 ratio with the system bus, set the CPU multiplier lower, and then bump the system bus until the memory can not maintain a stable system.
Finally, the ideal overclock test attempts to find a good combination of bus frequency, CPU and memory overclock settings.
Overclocking Configuration

With a CPU multiplier of 6x, 800MHz HTT, and lax memory timings, we proceeded to pump up the system bus. I started at 230 MHz, and incremented by 10 MHz doing a 8MB SuperPi calculation to determine stability before proceeding.


Once past 290 MHz, I started to get a little nervous – high bus frequencies can sometimes have unpredictable effects if overclocking fails. Pushing forward… 300 … 310 … 315 …. 357 MHz!!!
At 357 MHz, the system successfully ran all our benchmarks without an issue. While 2 hours of testing isn’t enough to really confirm if it’s 100% stable at that frequency, it does give a good ballpark number.

Increasing the CPU multiplier to 8x, the overclock drops to 320 MHz. At 10x, it’s 265 MHz.
All these numbers are very impressive.
Memory Overclock

Overclocking the memory on the EP-9U1697 fell short of expectations. In past reviews, we have seen this pair of Corsair XMS RAM capable of 230 – 235 MHz at 2.5 CAS settings. So we should expect similar on the EP-9U1697 right? I was only able to get roughly 214 – 215 MHz before SuperPi gave errors. 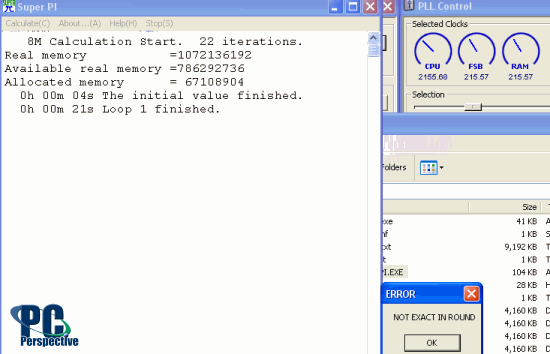 A modest RAM overclock of 215 MHz or higher gave the EP-9U1697 problems.
This RAM is capable of 230MHz and higher.

Changing the HTT, CPU, and memory multipliers didn’t change anything – 215 MHz was the absolute max. A bit of a let-down after the extraordinary overclocking of the motherboard. At bus speeds higher than 215 MHz, SuperPi would give errors.

At 600 MHz HT, the results were the same: memory overclock was limited to 215 MHz.
Other reviewers of the EP-9U1697 did not have problems with memory overclocking, so I’m left thinking it’s a problem with my configuration.
Ideal Overclock

The “ideal” overclock is a bit subjective. For me, the ideal overclock is the highest attainable CPU frequency with the RAM in a 1:1 ratio if possible. From the memory overclock results above, I knew that getting the system to overclock above 215 MHz was going to be a challenge.

The highest overclock at 12x was 215 MHz (as predicted) for a resulting CPU speed of 2580 MHz, and the memory at 215MHz. Anything higher and I would get errors while running SuperPi. Dropping the HT to 800MHz did not help achieve a higher overclock.

Here are some results of the benchmarks I ran during this test:


Clearly the best results were achieved when the CPU was using a 12x multiplier and the memory and bus were synchronous. A 10 FPS boost in Call of Duty when in SLI mode at 12×215 compared to 12×200 is definitely worth attempting for an overclocker.