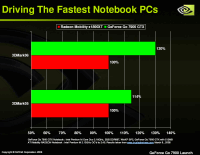 The unanswered question here is why NVIDIA did not provide any of their own tests. Instead they relied on 3rd party tests to illustrate their points, of which only one featured the Go 7900 GTX. Even though we don’t know exactly how the new Go 7900 GTX GPUs will perform, I suspect we can expect a 10% performance jump compared to the Go 7800 GTX similar to the jump from 7800 GTX to 7900 GTX on desktops. Personally, I was interested to see how the compromises on the Go 7900 GS affected performance, but we’re all going to have to wait for retail products it seems before we see any test results.
Final Thoughts
By improving their manufacturing process on mobile GPUs from 11 micron to 9 micron, NVIDIA was able to put higher clocks on the Go 7900 GTX without increasing power consumption. This should mean that NVIDIA has yet another top performing mobile GPU on their hands. Without a Radeon Mobility X1800 GPU on the market, NVIDIA currently has free roam in the high-end gamer laptop market.
I don’t have much of an impression of the Go 7900 GS since we have no indication how it will perform. It would be a real gem of a GPU though with lower power consumption and yet have good performance when needed.
We eagerly await test units so we can see how these new mobile GPUs really stack up.
Related Articles
Availability
As with the launch of the Go 7800 GTX a few months back, the Go 7900 GTX will be available immediately through DELL and Toshiba, with other vendors sometime after. Currently we do not have any pricing information, but expect to pay a premium for this new technology initially.
In the meantime you can use our PriceGrabber service to find the latest NVIDIA graphics cards, including laptops with NVIDIA Go GPUs.