First Hand with the PhysX Processor

We happened to play around with a PC equiped with an AGEIA PhysX processor and the new Ghost Recon demo and a demo copy of Cell Factor. Come see our videos!

Update (5/8/06): We now have a full review of the BFG AGEIA PhysX card online that features these same video, plus screenshots, performance benchmarks and more!  Be sure to check it out!

While sifting around some hardware we were shoved in front of recently, we noticed one system had a copy of the Ghost Recon: Advanced Warfighter demo on it as well as a copy of the Cell Factor demo.  And lo’ and behold, there appeared to be a driver for an AGEIA PhysX processor loaded as well!  Could this be our chance to see how the world’s first PPU performs in these two titles?  Yep!

If you need some background information on the AGEIA PhysX technology and where it all began, then you need only look towards our own two preview articles on this very subject.  The first was written right after E3 last year where the technology first made its debut and details a lot of the higher level views that AGEIA’s founders had for the technology.  More recently, in March of this year at the Game Developer’s Conference in San Jose, we received a lot of detail on the PhysX processor, the card that its going to be on in retail form, and how the technology works.  Those are the details in our second article.

We’ll have a full review of the BFG PhysX card once we get one in a retail form, but for now, we couldn’t pass up the chance to play with GRAW and a PPU now!

Ghost Recon: Advanced Warfighter is one of the most anticipated titles for the PC in some time.  Though it has been out on the Xbox 360 for a little while, the PC version is much more advanced in terms of gameplay and image quality as it was developed by a different team internally.  Of course, the PC version also has support for the AGEIA PhysX technology; both in software and hardware support. 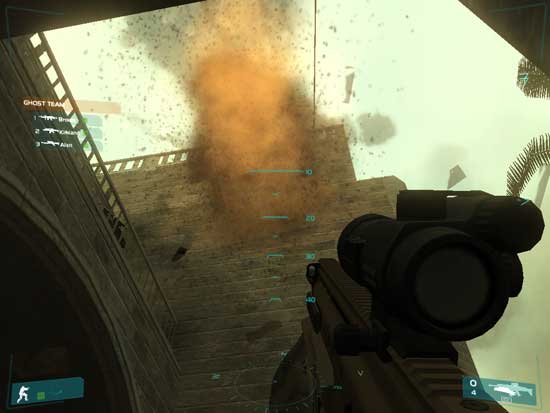 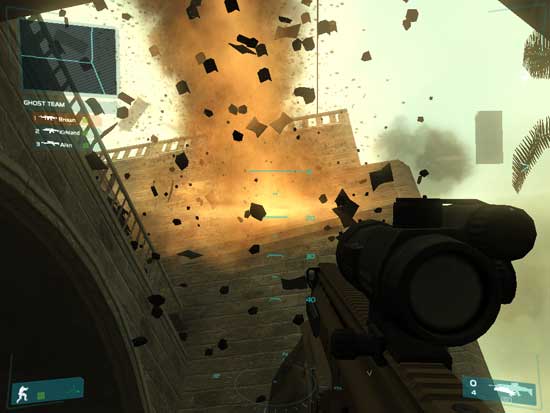 In our short time with the system, we were able to take a total of four videos of GRAW — two different sections and game play walk-thrus; each run once with the PhysX processor enabled and each once with it disabled.  This way, we were able to see how the game differed for a user who would purchase the add-in card later this month.

Cell Factor is really only a game I have heard of through the AGEIA grapevine; it is basically a showcase for the PhysX technology at this point.  That isn’t necessarily a bad thing though as it does take the moniker as the first title (at least so far) that requires the use of a PPU in order to run. 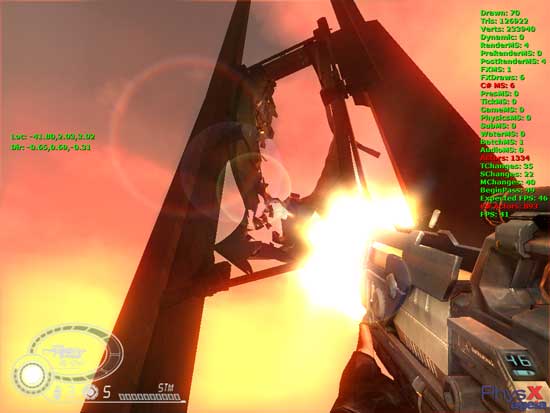 We have seen the game in action before and even had some video of it while AGEIA demoed it for us.

We only had a brief time with the AGEIA PhysX processor system for now, so we didn’t have enough time to “review” the card or technology completely, and it would be too early to finalize our opinions on anything based on this short look.

In Ghost Recon, the differences between having a PhysX card and not having one are not as dramatic as I had first hoped they would be.  Honestly, it would be a hard sell to most users to ask them to pay as much as $250 extra for a product that performs only what we saw here.  There is no doubt that in our videos we see a much more complex system of physics at work — the sparks and car destruction are more detailed, the amount of “rubble” from shooting the ground or buildings is definitely more complex and realistic and the various particle systems (dirt and smoke) are more impressive — but are they $250 more impressive?  Probably not, but with other titles such as Unreal 2007 coming out with even more advanced usage models on the PhysX PPU the market will eventually get there.

Our time with the Cell Factor demo showed what a true PhysX game could potentially look like, and it is impressive.  The amount of interactivity shown in our videos is unrivaled in any other title out now or that I have seen in development.  Unfortunately, this puts developers in a bind — do they create a unique title like this and require a PhysX card to play it, thus cutting out nearly all of their market initially, or do they stick to “effects physics” like we see in GRAW that don’t push the envelope?  It’s the same issue that AGEIA and company have been having to address with developers since the technology was first announced last year.

As 2006 progresses, I think we’ll see more and more usage of the PhysX PPU in games and more depth of physics processing because of it.  Hopefully it will be enough to “wow” us all.

Keep your eyes on PC Perspective for a full PhysX card review next week!

Update (5/8/06): We now have a full review of the BFG AGEIA PhysX card online that features these same video, plus screenshots, performance benchmarks and more!  Be sure to check it out!

Did you like this article and the content in it?  If so, please give it a digg so other readers can enjoy it as well!

Have comments or questions?  Post them in this thread in the forums and see what others have to say.  I’ll surely poke my head in too to add to any discussion.