Both NVIDIA and ATI have AM2 ready chipsets for us today, but the NVIDIA nForce 590 SLI chipset is brand-spanking new. What kind of performance and features can you expect on these new DDR2-based platforms?

Late last night AMD took the cover off of their latest processor iteration based on the new AM2 platform.  The major changes for the Athon 64 FX-62 and all other AM2 processors is a move to a new processor socket that features 940-pins (slightly different pin configuration from the 940 pins used for Opteron CPUs), as well as the introduction of processors with an integrated DDR2 memory controller.  For a full review of the new AM2 FX-62 processor and how it compares against previous AMD CPUs as well as the Intel lineup, you should definitely head over to my review of the platform posted last night.

Today we are focusing on the newly announced chipsets for the AM2 processor: the NVIDIA 500 series as well as the ATI XPress 3200.  While ATI’s chipset is identical to the previous iteration but with with a new socket, the NVIDIA 500 series includes several new products, new features and new motherboards that require a close investigation.

As if 15 new processors being released today wasn’t enough, NVIDIA decided to add to the mix four new chipsets as well.  Ranging from the ultra-enthusiast level down to the budget builder, the new NVIDIA nForce 500 series has something to offer everyone in the AM2 market.

Below is a quick introductory table that will point out the new names and segments.

While not quite the “nForce5” that most of us expected, the nForce 500 series makes the naming schemes much more intuitive and easy to understand.  The top dog of the chipsets being announced today is the nForce 590 SLI, followed by the 570 SLI, 570 Ultra and finally the nForce 550.  What differentiates these chipsets from one another? 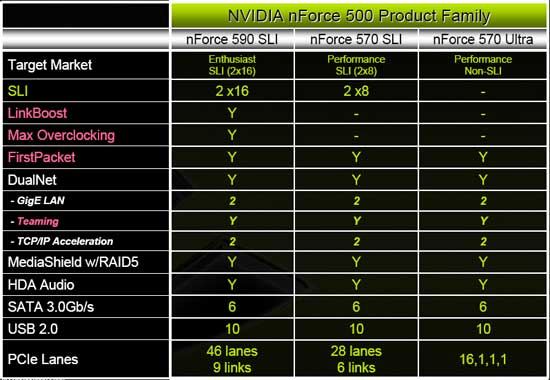 This table compares the various performance-oriented chipsets and gives us a very easy to read indication of what makes these parts so different.  The nForce 590 SLI is the enthusiast-class chipset that offers everything that NVIDIA brings to the table including dual X16 PCI Express lanes for the fastest SLI support, a new technology called LinkBoost that we will touch on later as well as enhanced overclocking capabilities.

All three chipsets share the same feature set down the line after that including FirstPacket and DualNet, two other new features we’ll look at in the coming pages.  Other new additions including support for 6 SATA 3.0 Gb/s devices over the previous 4 device support and HD audio support in the form of Azalia codecs.

The amount of PCI Express lane support is really the key point in here in these various performance-level chipsets.  The 590 SLI has 46 total lanes of PCIe support with 9 total PCIe links available to it.  The 570 SLI chipset still supports SLI obviously, but uses two x8 PCIe lanes intead of the x16 bandwidth the 590 SLI chipset uses.  Finally, the 570 Ultra chipset has a total of 19 PCIe lanes but can only offer a single x16 PCIe slot for single GPU support.

VIA Announces Adoption of K8T890 chipset