As I noted on the previous page, NVIDIA has several new features they are introducing with the 500 series of chipsets today.  First up we have something called “FirstPacket” which is an attempt by NVIDIA’s networking engineers to enhance the way your games (or other applicaitons) use your Internet connection for better gaming ping times or better VoIP support.

Basically, what FirstPacket does is intelligently decides which outgoing networking traffic is most important to you based on some rules you setup in the driver, and optimizes the outgoing networking queue to aid in enhancing the latency of those applications. 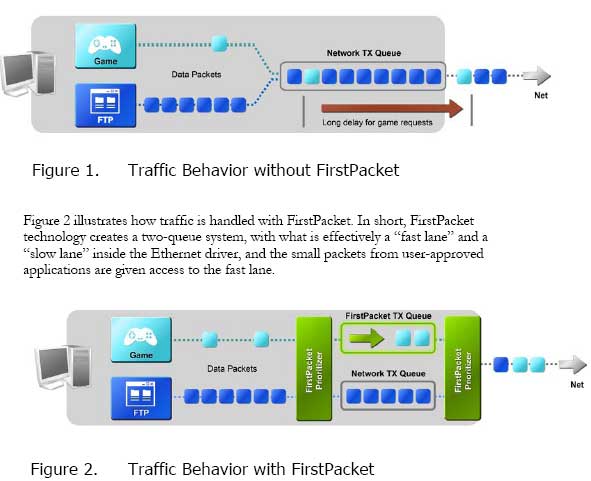 For example, as in the diagram above, if you are uploading a file or are running something file sharing application in the background while you are trying to play an online game, under normal circumstances your ping time would be affected by the amount of bandwidth being streamed out of your PC for the file transfer.  With FirstPacket enabled and set to monitor the traffic from that game, it will “queue” and hold back the file transfer to a slightly slower speed in order to make sure that your game traffic has priority on the way out of your system.

This graph above, provided by NVIDIA, shows a simple command prompt ping application running with FTP upload in the background.  When the FTP starts (where the big red line jumps up) the ping application is affected negatively, as the ping times jump up to around the 200 ms mark.  Once FirstPacket is enabled (where the line drops again) we see much more reasonable pings under 50ms.  This is of course a worst-case scenario, but it gets the point across.

It is important to note that this is only helpful for uploading information; either FTP’ing something or file sharing applications running in the background.  Incoming data (if you are downloading a file) will still affect your performance as the networking controller just can not decide when it will receive data from over the Internet.  FirstPacket seems useful if you are a frequent file sharer and gamer, but otherwise most users won’t see much benefit.

The new nForce 590 SLI chipset sports not one, but two full, on-chip Gigabit Ethernet connections.  Now, I know that most users don’t even have GigE networking set up in their house, so this mostly a “fluff” add-on that we can appreciate but not fully utilize.  NVIDIA is attempting to enhance the networking part of their chipsets this time around by making a few feature improvements on the previous generation. 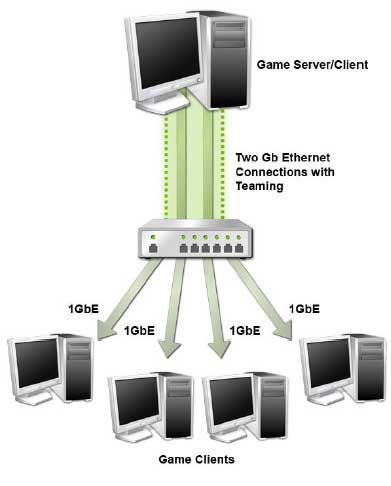 Not running Quakecon this year?  Well then perhaps you’ll want to share some VERY large video files with your roommates, all at once.  No?  Okay, then teaming might not be a feature readily used but it nice to have if the need arises.

When ATI released their XPress 3200 chipset on the first of March this year, they put a lot of emphasis on the ability for their chipset to overclock.  NVIDIA is doing the same thing with their 590 SLI chipset, but taking that to the next level by offering some Auto overclocking when using compatible system components. 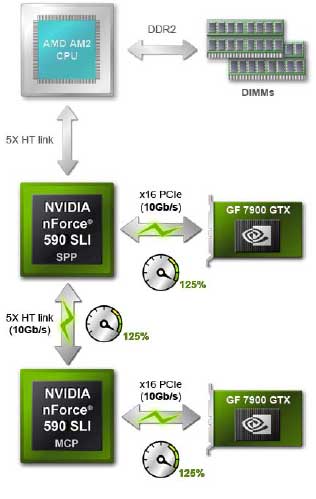 Basically, when you team up the nForce 590 SLI chipset with one or two GeForce 7900 GTX GPUs, the system will automatically bump up the system clocks 25% to improve performance.  Both PCIe lanes are increased from 1 GHz to 1.25 GHz and the connection between the north and south bridges is increased from 2.0 GHz to 2.5 GHz.  This is done in the BIOS, as long as the setting are set to “Auto” and without the need for any user intervention.  At first this would seem like a sweet addition to the 590 SLI feature list, but since this is currently limited to only the GeForce 7900 GTX GPU, the number of users who will get to utilize it is pretty low.

And honestly, the performance changes that it offers are very slim in our testing.  Even at resolutions as high as 2560×1600, the performance delta between a standard configuration and one that has been “LinkBoosted” was nearly zilch.  Hopefully we’ll see some real advantage to this feature once Quad SLI hits the streets next month.

VIA on the VIA / AMD Relationship