As we still were set to expect, the performance results from our testing show that both the NVIDIA and ATI AM2 chipsets perform very similarly when using the same FX-62 processor, Corsair memory and other components.  The good news for NVIDIA is that all of the new features and software didn’t slow their product down at all, allowing them to keep their high performance levels for the enthusiast motherboard segment.  For ATI, their USB and SATA performance is a bit faster thanks to the SB600 south bridge and we no longer have the automatic stigma of using an ATI-branded south bridge on a motherboard.

The AM2 processors using DDR2 memory didn’t see any large performance leaps over what we had seen previously in the S939 platform with processors up to the FX-60 released earlier this year.

ATI and NVIDIA appear to be taking very different approaches on how to address the subject of chipset features.  NVIDIA, ever since they first entered the chipset market, has taken on the motto “the more, the merrier” when it comes to integrating features into the chipset.  The nForce 590 SLI chipset offers a lot to the end user including 6 SATA II channels with RAID 5 support, dual Gigabit networking connections, HD audio as well as the more inventive features such as LinkBoost, DualNet and SLI Memory. 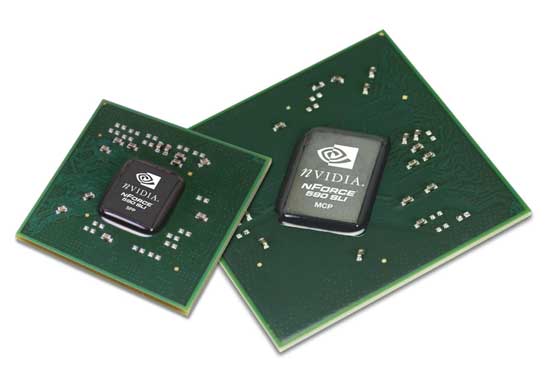 While you could reasonably question the benefits that LinkBoost and DualNet have to offer, the power of the SLI memory initiative is very intriguing and could become very useful if enough of the industry (and JEDEC) accept it.  The ability for memory vendors to support multiple SPD options on a single DIMM would help consolidate SKUs as well as allow enthusiats to buy one set of memory for both overclocking and low latency system configurations.

In contrast, ATI seems content to offer only the bare essentials in the feature set department.  This has the advantage of allowing ATI’s chipset to be very cool and use much less power than NVIDIA’s core logic, as well as keeping the price down, at least theoretically.  By not even having an integrated a Gigabit network connection, the ATI XPress 3200 chipset looks meager when compared in a side-by-side feature comparison, though the performance is still there for enthusiasts.

Both NVIDIA and ATI have started taking overclocking very seriously this year.  When the XPress 3200 launched we were told it was specifically built with overclocking in mind as the qualifications on the bus speeds and more were higher than necessary in order to guarantee at least some kind of overclocking potential.  NVIDIA took this one step futher by automatically overclocking the PCI Express buses and HyperTransport buses when the proper components are installed.  While the benefits of this automatic overclocking are minimal, NVIDIA still has left plenty of room and options for overclockers to play with in order to fine tune their new AM2 system to its limits.

One point that must be continually touched on when comparing NVIDIA and ATI chipsets is the platform.  I am not talking about Socket 939 or AM2 in this case, but the platform of chipset and multi-GPU graphics.  If you are seriously looking at using multiple video cards, then NVIDIA’s SLI platform is still the stronger of the two in my opinion.  NVIDIA is still hard at work adding to the software profiles, working with developers to help them properly implement SLI support and adding board partners for both motherboard and video cards.  ATI has done a lot of work catching up as well, but they haven’t quite gotten to the level that NVIDIA is at in terms of overall platform support.  You can easily find SLI motherboard, video cards, power supplies and even games but CrossFire products are still hard to come by.

Even though this is a launch article, I haven’t been able to find any AM2 processors or nForce 590 SLI motherboards for sale.  That shouldn’t be a problem as I expect multiple boards to be for sale sometime next week according to board vendors and e-tailers.  Pricing is expected to be $20 or so higher than the nForce4 SLI X16 motherboards, which would put them over $200 initially.  During June, I would expect to see the prices drop quite a bit as the AM2 processors and platforms become more common and the excitment dies down just a bit.

The NVIDIA nForce 590 SLI chipset is great performer and offers a ton of features that you may or may not find useful, but you can always turn them off.  The Foxconn C51XEM2AA motherboard, that will be available in retail very shortly, is extremely impressive from a technical stand point.  With all the overclocking and tweaking features you could want in the BIOS, this board offers just about everything you can ask for in a motherboard solution.

The ATI AM2 reference board shows a lot of promise as well, but as always, we are reserving our final judgement for a retail product, if and when it hits our labs.

Have you checked our motherboards specs database yet?  With it, you can compare motherboards side by side to get a quick glance of the features that they offer, as well as links to our reviews and pricing!  You can easily setup comparison like this one; give it a shot!

Be sure to use our price checking engine to find the best prices on the Asus M2N32-SLI nFOrce 590 SLI motherboard, and anything else you may want to buy!