While listening in on the AMD analyst day going on right now in Austin, TX, AMD introduced something more than a little exciting.  When sharing a roadmap of the desktop outlook for AMD’s processors through 2007 and 2008, a platform known as “4×4” was discussed as being the ultimate enthusiast platform.  What does that include?

What you are seeing here is a dual-processor system board platform, each using dual-core processors for a total of four logical cores in a single computer.  Also included on this slide is the introduction of dual-GPU video cards, similar to what we have seen in NVIDIA’s Quad-SLI technology.  Two of these dual-GPU cards combined together in either SLI or CrossFire mode brings the four GPUs to the AMD “4×4” platform.

Interestingly, though NVIDIA has talked about Quad SLI for some time, ATI had been silent up until this AMD presentation.  While we assumed that ATI was working on competition for the NVIDIA technology, now we know for sure.

AMD also said this allows for enthusiasts to “step-up” in their technology, by getting a system with a single CPU and video card to start with, and upgrade later down the road to a true “4×4” configuration.  This is the same platform advantage that NVIDIA offered up with their SLI technology and it’s interesting to see AMD taking the same route.  Could this mean the re-introduction of dual-processor motherboard in the enthusiast market soon?  They have been missing for quite some time as SMP systems were much more expensive and didn’t offer the performance advantages many had hoped for.

There is no doubt that a system with two dual-core Athlon processors and two dual-GPU video cards would be incredibly powerful and might help address the CPU-limitedness of many games when using SLI and Quad-SLI configurations.  By no means does this sound like a cheap gaming solution, but the best never has been, right?

There hasn’t been any indictaion yet on when this technology platform is actually going to be ready, but I’ll let you know more as the tech day continues.  Check back often!

First, Digg this news to share with others, then head into our forums to discuss!! 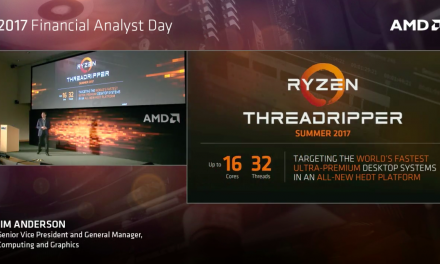