We will now test the hard drive performance of the Asus A7J using HDTach. Results from these tests are important if you do a lot of disk writing and reading like copying media files. To compare, we are testing the Fujitsu 4200 RPM drive in the Compaq V2410, the 5400RPM Fujitsu in the Asus W5F, and we throw in some desktop HDD numbers for good measure. 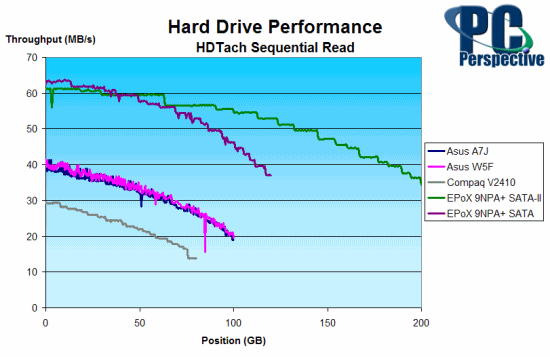 These are some really interesting results! First, the two Asus laptops perform identically which shouldn’t be too surprising since they are using the same series of hard drive. More surprising is the 10 MB/s difference in all results between the Asus A7J and the Compaq V2410 that uses a 4200 RPM HDD.

Of course there’s no real point in comparing the SATA drives to the laptop drives since laptop drives are a long way from catching up to their desktop brothers.

For many of us, the only way to add functionality not built into a laptop package is by using one of the expansion ports. With so many USB and Firewire devices on the market these days, tests like the one we are about to perform are even more critical. Using a Bytecc ME-740 U2F external ATA133 enclosure, we will test the performance of the USB and Firewire ports on the Asus A7J. 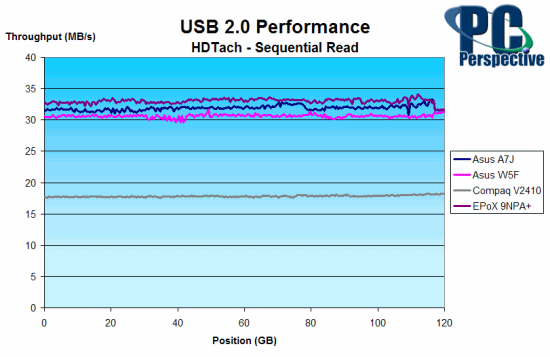 Nice neat stack of results with the EPoX desktop on top, followed closely by the Asus A7J. I found it surprising that the A7J and W5F were not identical in performance since they are using essentially the same hardware. Perahps the extra RAM on the A7J is proving useful here, though by a small margin. The Compaq V2410 is just sad at 17 MB/s.

For most laptop users, the Firewire port goes relatively unusued. Most use it for an iPod or a hard drive, even less use it for a video camera. However, the few tests will show you that Firewire is great for long sustained transfers that beats USB 2.0. 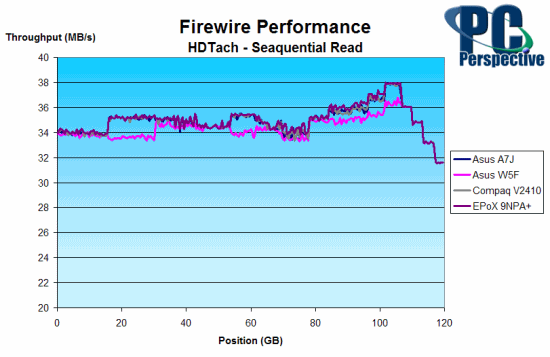 Firewire tests not very interesting and all systems perform identically despite having different controllers.