NVIDIA didn’t bother sending out reference samples of the 7950 GX2 since they are planning a hard launch.  That means cards should be available for purchase immediately and our review cards are retail samples that you will actually be able to purchase if you decide to do so.  It’s a win-win for the community. 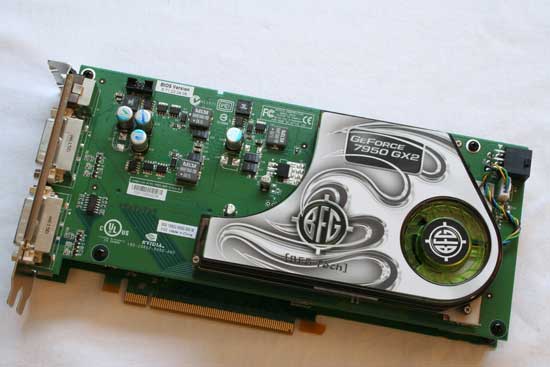 The BFG 7950 GX2 is identical to the NVIDIA reference design with the exception of the sticker placed on the top heatsink fan unit.  The clock speeds are 500 MHz core and 600 MHz memory; there is no out-of-the-box overclocking on any of these units.  As far as I know, that is the case from all the vendors that will be selling 7950 GX2 cards today.  Perhaps the vendors got some ‘feedback’ from NVIDIA when all the trouble with the 7900 GTX overclocking and freezing issue hit the fanâ€¦?

In either case, this means that all the 7950 GX2s on the market today are practically identical with the exception of the warranty, support and extras in it.  Price is going to play a big part in these sales.

Not being satisfied to just look at the outside of this card, after testing was completed I set out to dissect it and see what was under the hood. 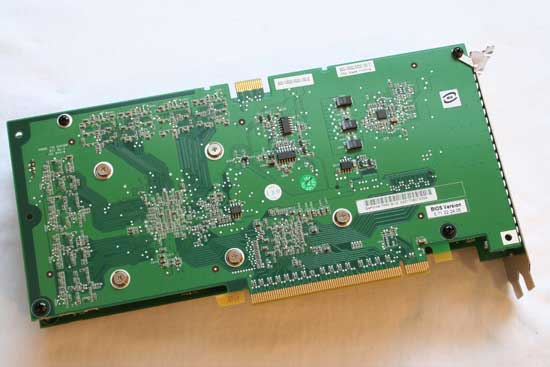 This is the back of the card, with nothing that really stands out here — no memory chips or complicated circuitry to be found. 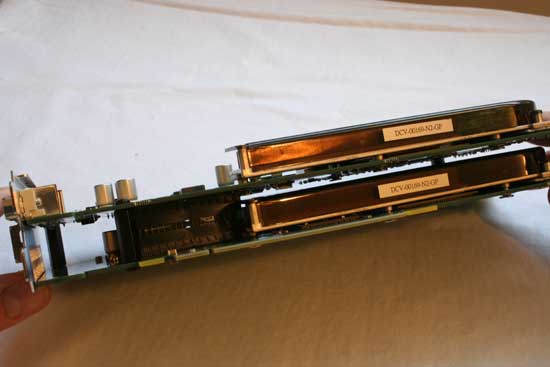 From the bottom of the cards you can see that there are internal connections between the two separate PCBs that house each GPU core. 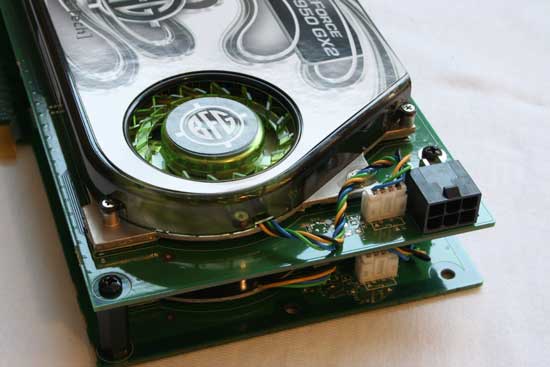 One important change for this second generation of dual-GPU graphics card from NVIDIA is the requirement for only a single PCI Express power connection.  The first iteration (never sold or marketed) was on a much longer PCB card and required two PCIe power connections for a single dual-GPU video card. 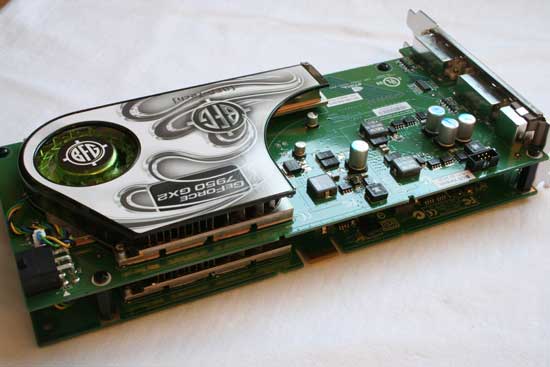 Looking at the top of the card, you can see a single SLI connection exists on the rear PCB for pairing up a set of these in Quad SLI mode.  This feature isn’t supported yet by NVIDIA or BFG but it will be later with an improved driver release, so we are told. 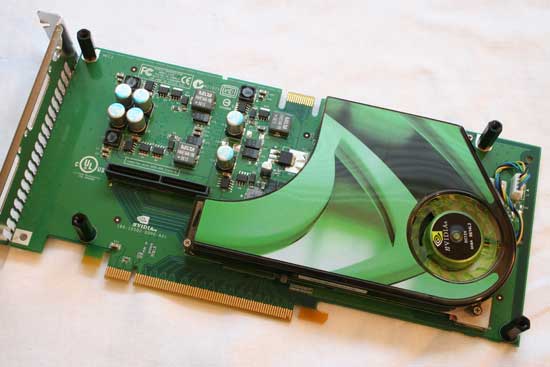 This image is what we found under the first PCB board after disassembling it; a nearly identical PCB with the same heatsink fan unit on it; this time without a BFG sticker placed over the reference label.  Since most users shouldn’t be taking their cards apart anyway, it doesn’t really matter one way or the other.

You can see to the left of the heatsink is a black connection where a small paddle card is placed in order for both GPUs to communicate. 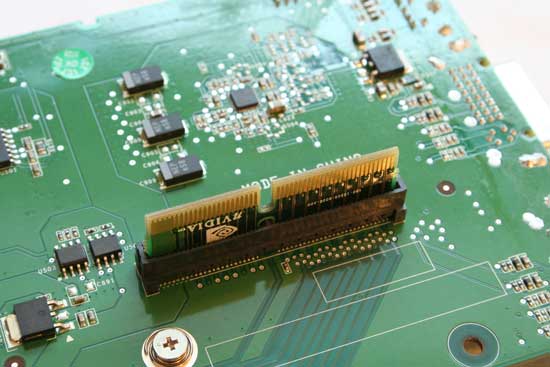 The connection card itself is very small and the circuit board is rather flimsy and seems like it might be broken pretty easily, so I’d recommend anyone taking their’s apart to be very careful when putting the unit back together.

That’s pretty much all there is to the physical investigation of the BFG 7950 GX2 video card.  It’s definitely the most unique video card we have tested in quite a long time but let’s see if it can perform on level to satisfy as the new flagship.