Just because NVIDIA’s partners are saying they weren’t going to overclock the 7950 GX2 in its retail form, that didn’t stop us!

This is the new NVIDIA overclocking control panel showing the stock speeds on the BFG 7950 GX2 card; 500 MHz core and 600 MHz memory.

Just by hitting the ‘Find Optimal’ button here brought us to a 550 MHz core speed and 700 MHz memory speed; not too shabby for a nearly-NVIDIA-endorsed configuration.  I was able to get an even higher overclock to 615 MHz core and 750 MHz memory, nearly equaling the performance of a 7900 GTX SLI configuration!

Of course, your mileage will vary and we’ll have to wait and see what other users get with their overclocks to see how this holds up.

For our testing comparison, we took a single BFG 7950 GX2 graphics card and tested it against the previous flagship from NVIDIA and BFG, the 7900 GTX OC.  I also decided to see how the GX2 performed against a pair of 7900 GT cards in SLI mode, since the specifications on them were so similar.  Finally, ATI’s showing is comprised of their flagship X1900 XTX graphics card.

Also, for this article I have still included testing at both 1600×1200 as well as 2048×1526, but instead of separating the results from the two resolutions under two different headers, I have combined them on the same page, broken up by gaming title. 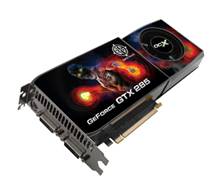