Board Layout and Features (cont’d) 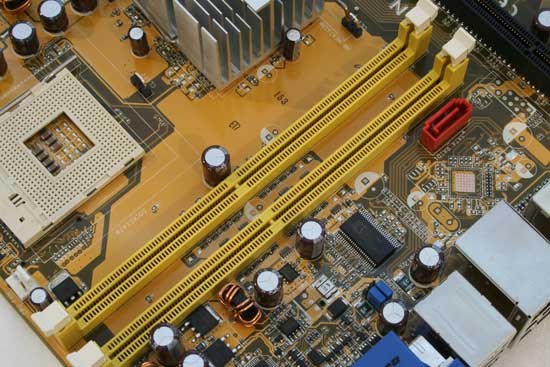 The Asus N4L-VM DH motherboard only has two DIMM slots that support DDR2 memory up to speeds of 667 MHz.  While four slots would have been better, for the type of system this board will be built into, 1 GB of memory will probably suffice and even 2 GB kits (2 x 1 GB modules) are becoming more affordable.

The additional SATA connection seen below the DIMM slot is powered by the JMicron SATA controller. 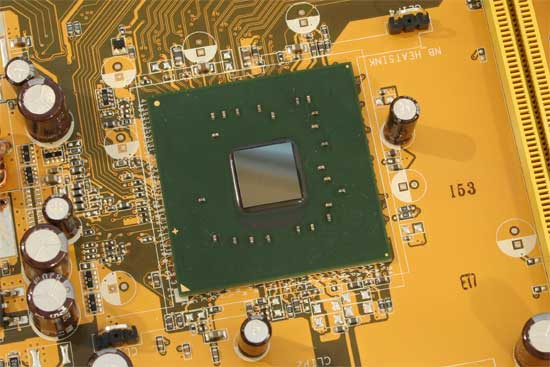 The Intel 945GM chipset paired with the ICH7-M DH south bridge power the Asus N4L motherboard.  Removing the passive heatsink on the 945GM reveals the flip-chip sitting underneath.  While it requires passive cooling, the south bridge remains uncovered and doesn’t generate enough heat in Asus’ opinion to require even an additional heatsink.  This definitely adds to the ‘silent PC’ aspect of this motherboard. 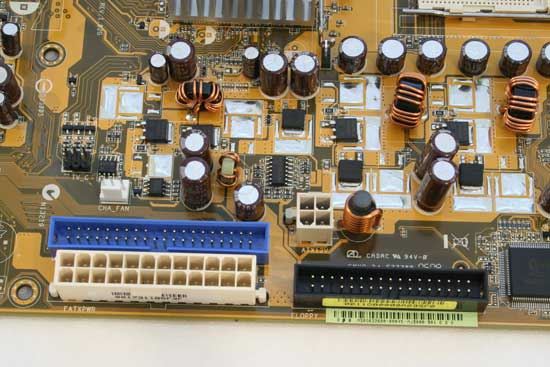 To the right of the processor socket and DIMM slots is the single IDE channel that Intel’s ICH7 south bridge provides, as well as the floppy and power connections.  Asus has a 24-pin ATX power connection as well as a 4-pin 12v ATX connection to provide stable power to the system.  The MOSFETs seen in the above photo are much smaller than we have seen on other AMD and Intel desktop motherboards, an indication that the power requirements for the processor are much lower than we are used to seeing. 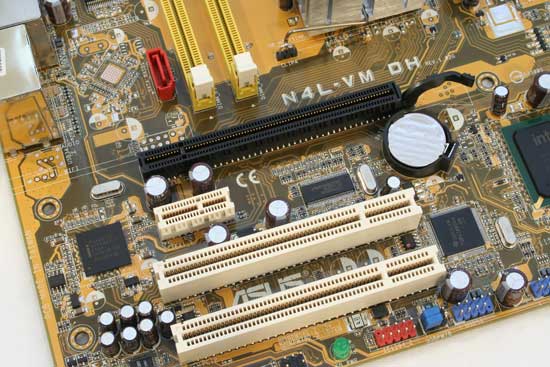 The micro-ATX expansion configuration is more restrictive than desktop boards, providing only two legacy PCI slots, a single x1 PCI Express slot and a x16 PCIe connection for discrete graphics cards.  Also because of the small board footprint, the two DIMM retention clips above the x16 PCIe slot shown above are unable to be used while a video card is installed in the system — that means graphics cards will have to be removed before installing or removing memory modules.

Most users will probably be using the x16 PCIe slot for an add-on video card (there is a Intel 950 GMA onboard), unless the only goal of the system is to act strictly as an HTPC.  That leaves you with two PCI slots for expansions like a sound card or even PhysX card.  For those HTPC uses, the on-board video and audio solutions should be acceptable for non-gaming situations. 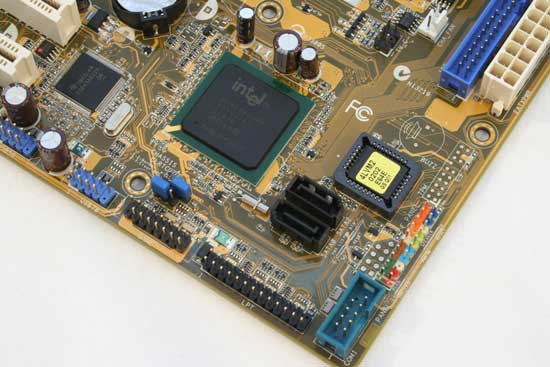 At the bottom of the board, Asus has outfitted the N4L-VM DH motherboard with the headers they deem necessary for a board of this class.  There are two SATA channels courtesy of the Intel ICH7 south bridge as well as LPT (legacy printer), COM, Game (or MIDI), USB 2.0 and FireWire headers that can be filled with back panel connections if you need to use any of these devices.  In addition to easy to read and well marked case connections on the board, Asus has included front-panel headers for audio connections on the front of a PC case and can be very useful for occasional headphones users. 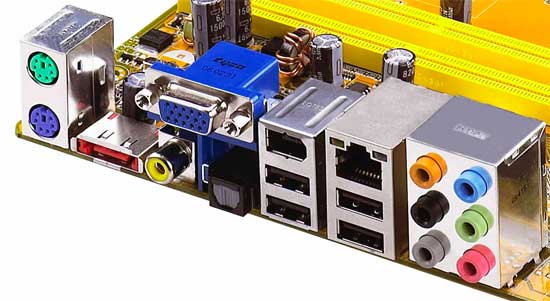 Looking at the external connectors we see a lot of audio connections to go along with the standard IO and video connections.  The audio is powered by the Realtek 882M codec and has support for 8-channel audio and has jack-sensing technology integrated into it.  Besides the standard analog 8-channel connections on the back of the board Asus has included one optical and coaxial SPDIF outputs for connections to stereo receivers with integrated decoders.

The network connection is attached to the Intel 82573L Gigabit Ethernet chip for the fastest speed wired networking you can get in a consumer motherboard.  Because it is run on a PCI Express channel instead of the legacy PCI bus, throughput on it was very high and the CPU utilization was fairly low as well.

The external SATA connection is powered by the same JMicron chipset that powered the connection near the DIMM slot and allows you to easily attach SATA drives to your system for backup and copying purposes.  The VGA output is powered by the integrated Intel GMA 950 graphics card and should be adequate for only 2D and video playback purposes.  If you plan on doing any game on your system, either on a monitor or with a TV attached, you’ll definitely want to upgrade to an ATI or NVIDIA discrete solution here.

The layout on the Asus N4L-VM DH motherboard was pretty clean for a micro-ATX design though I would have liked to see some more video output options — DVI, Component, something that would easily allow us to attach an HDTV to our system without requiring a discrete solution. 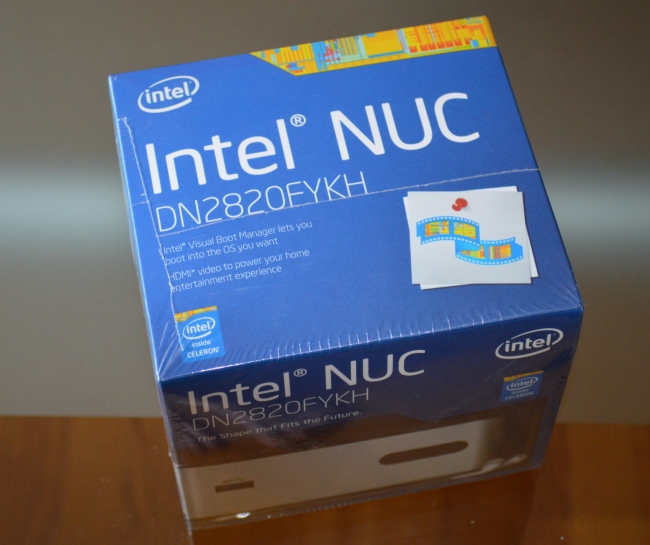