The new Asus P5W DH Deluxe motherboard is similar to other 975X motherboards on the market, but thanks to Asus’ Digital Home branding and some innovative thinking on Asus’ engineers parts, this model offers a few new features that haven’t been seen elsewhere. 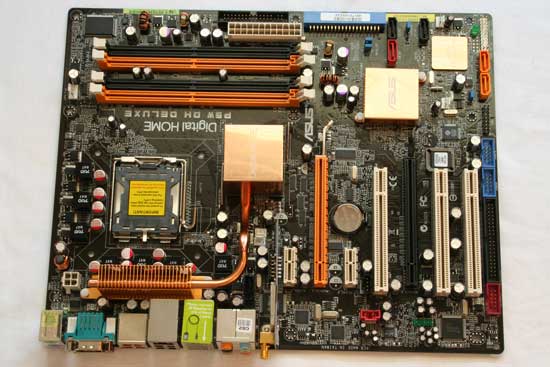 A quick glance at the board tells us that its quiet as there are no active cooling components on the board (standard at least).  The board does come with a small slot-shapped fan that fits over the heatpipe fins behind the external connectors that is used when you are using a CPU cooling method other than standard air cooling.  These heatpipes require the air movement of the CPU fan in order cool correctly, so if you use water cooling on it, the fan is there in case the temperatures get too hot. 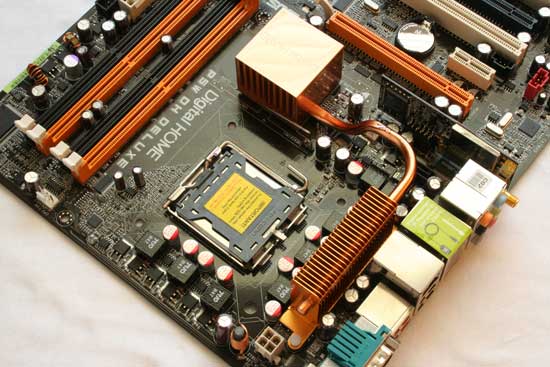 Here is a better view of the CPU socket and the heatpipe used for cooling the chipsets that moves around it.  The 4-pin power connector sitting above the heatpipe fins is well placed and shouldn’t interfere with CPU cooling at all though removing it after the board is installed in a small case could be a pain.  You can also tell here that the CPU socket has plenty of room for nearly all cooling methods and heatsinks to be installed because of the low-rise capacitors that Asus used. 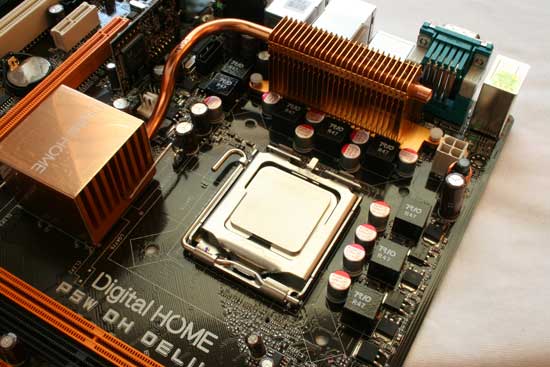 With the CPU installed, and from a different angle, the spacing still looks adequate for nearly any cooling methods. 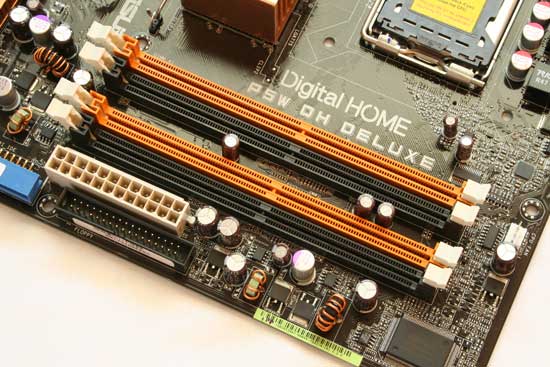 The four DIMM slots on the board are spaced a good distance from the CPU socket, and have spacing between them enough so that installation and removal of the modules is not difficult.  This also gives the modules better air flow.  The 24-pin ATX power connector sits behind the DIMM slots, out of the way of cabling, though a bent ATX cable or tall memory modules might make for a tight fit. 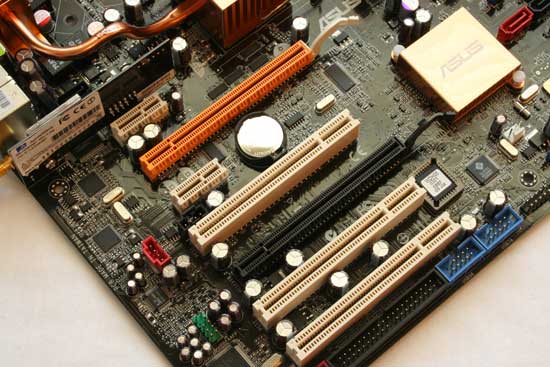 The expansion slots on the motherboard provide two x16 PCIe slots for graphics cards and supports CrossFire technology from ATI (as of the time of this writing).  Two x1 PCIe slots and three legacy PCI slots round out the slots on the board.  With a single GPU installed, you will have at least access to a single x1 PCIe slot and three PCI slots; with two GPUs installed, you will only have one of each depending on your installation of the additional header cables that Asus provides. 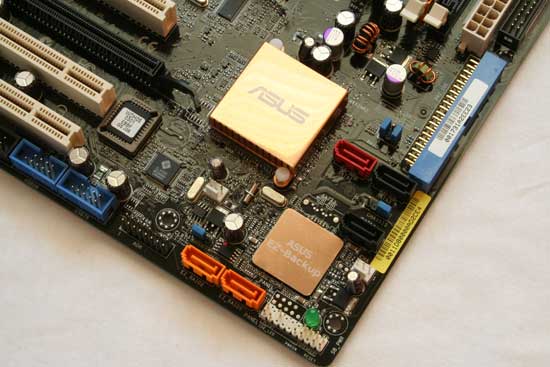 The bottom right of the board is where the majority of the storage and peripheral connections are made.  There is a group of three SATA connections to the right of the south bridge chip (covered by a small heatsink) that are from the Intel ICH7R chip.   Asus has included not one but two external SATA chips, the first of which is the JMicron JMB363 that supports one external SATA connection, one internal SATA connection (located by the CPU socket) and one additional IDE channel so the P5W DH Deluxe still has two IDE channels for existing optical drives and hard drives.  The other secondary SATA chip is the Silicon Image 4723 that supports two SATA 3.0 Gb/s.

What is interesting is that Asus has created a brand called the Asus EZ-Backup that automatically creates a RAID array when the user connects a hard drive to the ICH7R’s SATA connections, the second drive to the Silicon Image 4723, and puts the automatic RAID configuration jumpers enabled.  After setting the hardware switches, there is no software that needs to be run and no configurations that need to be set; the board automatically makes a RAID array and protects the data as normal. 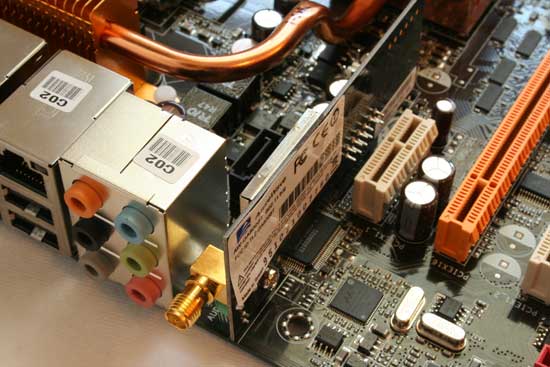 Here we have the integrated wireless networking on the P5W DH Deluxe board, powered by a Realtek 802.11g 54Mbps controller.  Also worthy of note, Asus has another neat feature here that allows the system to continue to act as the wireless access point for an entire wireless network even when the system is in sleep mode.  So, if your entire network is going to be wireless based, then you can essentially forgo the use of an external router and use the WiFi-AP Solo feature from Asus. 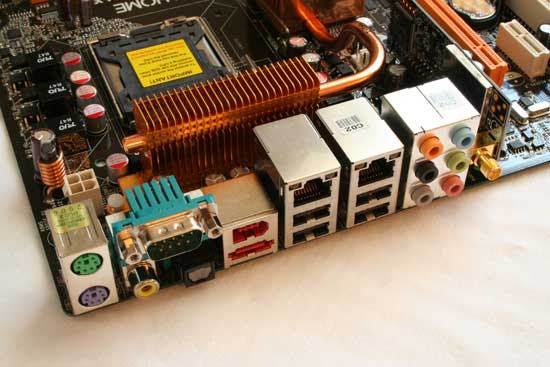 Looking at the external connectors, the P5W DH Deluxe offers just about everything you could need.  There are the standard PS2 ports and even a legacy serial connection for older peripherals.  The two networking connections are both powered by a Marvell 88E8053 chip and support Gigabit Ethernet speeds.  There are four USB 2.0 connection, a single FireWire connection as well as on external SATA (eSATA) connection for storage and backup options.  The audio on the board is powered by the Realtek ALC882M HD-audio codec and Asus has included analog output jacks on the back of the board to go along with the optical and coaxial digital outputs.